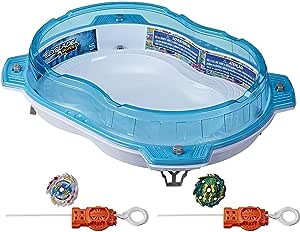 by BEYBLADE
4.5 out of 5 stars 497 ratings
| 15 answered questions
Available from these sellers.

Drop in to victory with Beyblade burst rise hypersphere Tech! Hypersphere vertical drop BEYSTADIUM consists of 3 sections specially designed for exciting Beyblade Burst battles. Climb the vertical wall of the Stadium to reach the brink and gain an edge over your contenders. Then, speed along the brink and drop in to the battle ring for head-to-head collisions. Get the drop on your opponents for exciting, high-intensity battles!

beyblade Burst toys are for 8 year old boys and girls and up. Battle set makes a great gift for fans of the anime series and kids who want to level up on their journey toward Beyblade mastery.

hasbro and all related terms are trademarks of Hasbro.

4.5 out of 5 stars
4.5 out of 5
497 customer ratings
How does Amazon calculate star ratings?
Amazon calculates a product’s star ratings based on a machine learned model instead of a raw data average. The model takes into account factors including the age of a rating, whether the ratings are from verified purchasers, and factors that establish reviewer trustworthiness.

Sean
4.0 out of 5 stars Decent Starter Stadium. Few notes for parents.
Reviewed in the United States on February 17, 2020
Style: StandardVerified Purchase
I only recently got into Beyblades so I'm not an expert but wanted to give a few notes for parents who may not know much about them.

Beyblades fall into 4 types: Defense, Attack, Stamina, and Balance. The first 3 share a Rock, Paper, Scissors relationship so Defense > Attack > Stamina > Defense. This set comes with 1 attack and 1 defense Beyblade. The Defensive one (green) is usually the winner from what I've found. If you are buying this to share between siblings, you may want 1 or 2 extras of differing types to avoid frustration. There is still some skill in how you launch so it's not impossible for one to win with the Attack type.

The parts of the Beyblades can be mixed and matched to create better match ups.

As for the review:
This is a cheap stadium so I knew it wasn't going to be perfect going in. The plastic is thin and there are some imperfections in the surface of the bowl. Mine doesn't really seem to hurt the performance enough to notice so I didn't have any problem with them. I liked the walled aspect of it. It seems like its impossible for them to fly out of the ring. There is a flat edge on the outside so it's kind of cool seeing one whip around the edge then fall into the bowl. The launchers are not as good as the one I got from the single Beyblade pack at Walmart but they work just fine. I feel like the reviews about bad launchers are probably from people who didn't read the instructions. Also I wanted to note the tips do not have the mode change like ones from Walmart but these out performed my Walmart ones so maybe that's a good thing. The bowl also isn't symmetrical, of the few episodes from the show I've seen, most of the bowls are symmetrical. It works well on tabletops and carpet. I really like the movement the hour glass shape creates for the Beyblades.

Overall this is probably a good starter set for Beyblade, I probably wouldn't get this one for people who already have a stadium and/or collects them though.

Ajit Kumar Pandey
5.0 out of 5 stars Must HAVE!!
Reviewed in the United States on December 3, 2019
Style: StandardVerified Purchase
Amazing set! This set is a must have! Ashindra and Ace Dragon are both incredibly strong. The vertical drop stadium exceeds all of my brother and my expectations! The stadium allows the beyblades to soar through the air and pounce upon their prey! Best first GT beys ever!
Read more

Jen
1.0 out of 5 stars Don’t stay on their launchers
Reviewed in the United States on December 27, 2019
Style: StandardVerified Purchase
Both of the bley blades don’t stay in their launchers. They fall out before you can pull the key. Completely disappointed.
Read more
18 people found this helpful
Helpful
Comment Report abuse

MiguelTDK
5.0 out of 5 stars So cool
Reviewed in the United States on November 30, 2019
Style: StandardVerified Purchase
It is so cool and it is part if the new series Beyblade burst rise
Read more

HappyBunny
2.0 out of 5 stars The plastic battle station is made pool quality.
Reviewed in the United States on December 31, 2019
Style: StandardVerified Purchase
I got this beyblade burst set for my son who loves beyblades. His old battle station was falling apart so he wanted this set. He was disappointed that this station was made so cheaply. The plastic is thin and just feels cheap. The beyblades that came with this set doesn’t spin long compared to his older Tomy sets which was made from metal or steel.
Read more

lora
4.0 out of 5 stars Great product
Reviewed in the United States on December 6, 2019
Style: StandardVerified Purchase
I think my grandson will love this .
Read more
7 people found this helpful
Helpful
Comment Report abuse

Kindle Customer
3.0 out of 5 stars Not as expected
Reviewed in the United States on January 30, 2020
Style: StandardVerified Purchase
This was a gift for my grandson's birthday. The Beyblade stadium is rather flimsy and I'm not sure how it is going to hold up with energetic boys. Besides that, one of the bey blades that came with it has non-working magnets in it. It will not attach to the launcher (we tried it on different launchers). When I went to product support chat with the manufacturer, the first thing they wanted was my (complete) birthday! I am not comfortable giving out this kind of information for something like this, so I guess I won't be getting any help for the defective toy.
Read more
3 people found this helpful
Helpful
Comment Report abuse

T.M. Reader
TOP 500 REVIEWER
4.0 out of 5 stars Popular. Fun.
Reviewed in the United States on January 6, 2020
Style: StandardVerified Purchase
This was a requested toy this years (2 requests from my gaggle of grandsons). Was popular and delivered much play fun. Caution - one of those toys that takes up a lot of space.
Read more
5 people found this helpful
Helpful
Comment Report abuse
See all reviews from the United States

Audrey125
5.0 out of 5 stars Fun challenge
Reviewed in Singapore on January 15, 2020
Style: StandardVerified Purchase
My kids enjoyed playing this for hours! Great toy to keep them entertained with friends!
Read more
One person found this helpful
Helpful
Sending feedback...
Thank you for your feedback.
Sorry, we failed to record your vote. Please try again
Report abuse
Load more international reviews