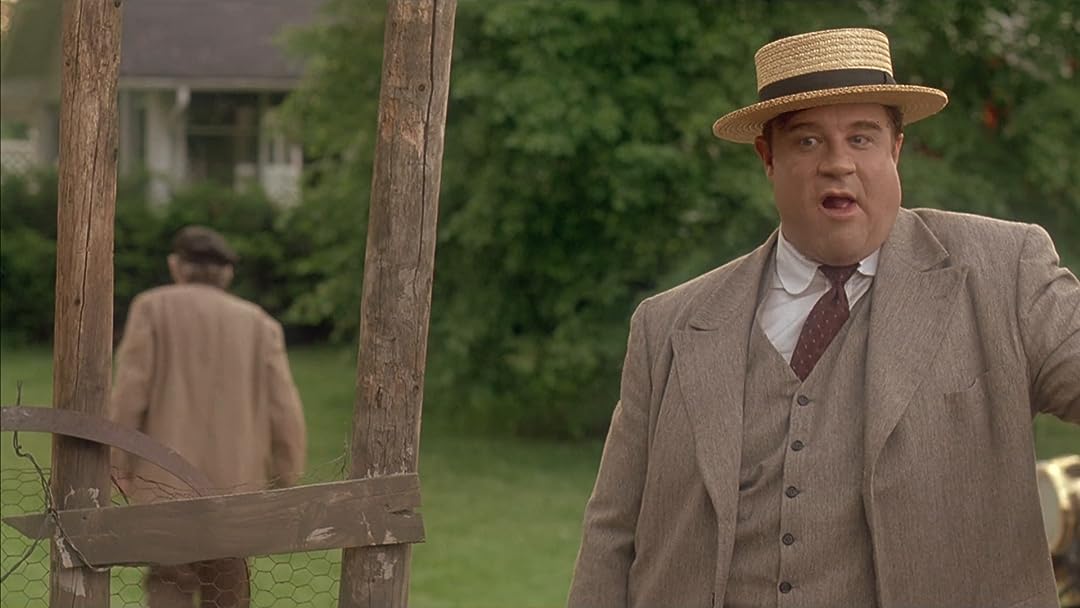 (1,140)
5.91 h 54 min1992PG
The man behind the myths - baseball's legendary slugger Babe Ruth was powered by an appetite for life that makes steroids look like candy! See the booze, the women, the paparazzi and the Sultan Of Swat!

PittsburghReviewed in the United States on September 2, 2020
5.0 out of 5 stars
Great Movie
Verified purchase
Babe, at his core, was a good guy. His past may be the reason for his immaturity. I was not a sports fan, or a Goodman fan before watching it. After the film, I am now a John Goodman fan, he is funny and genuine. I watched it because I'm a Ralph Marrero fan, and this was his last movie. (He was awesome as always, I love the Rickles' Laugh that he is known for). As for the Babe's behavior, I would think it is somewhat mild by today's standards for our so called "sport's hero's." Babe is a more caring person than most of the sport players in the news.
3 people found this helpful

Gaetano BrownReviewed in the United States on December 21, 2014
3.0 out of 5 stars
Historically inaccurate but watchable.
Verified purchase
Not nearly as bad as people make it out to be but still not nearly as great as it could have been. While I commend the performance of John Goodman and the rest of the cast in general, the films low budget is very noticeable and the amount of changes that they make to Ruth's story is a huge number.

95% of the story only shows the negative side of Ruth's story and the positive stuff is mainly about the Myth's we've heard from Ruth's biography instead of the facts.

The low budget shows in the movies rather short running time for a Biopic and the amount of Baseball stadiums they could utilize. Only a couple of stadiums were used and were dressed differently to try and hide this fact. This would have probably worked if they were dressed better but you can tell right away that it's the same stadium each time.

So overall, if it were a fiction film, this would have worked wonderfully but it's not. It's about a real man, a true legend in the history of sports, Babe Ruth. With a low budget and too many historical inaccuracies, The Babe is a film that just doesn't work as a Biopic. As a normal film, it's fine, it is watchable when just viewed as another film.

Andrew GeerReviewed in the United States on April 23, 2022
4.0 out of 5 stars
A Baseball Legend to Understand
Verified purchase
This movie really shows a great depiction of what Ruth's life was like both on and off the field. It really makes you feel for him. One thing I have come to learn is that Ruth's controversial trade to the Yankees brought a curse upon the Red Sox; which was known as the Curse of the Bambino. And that curse remained with the Red Sox until they finally won the World Series in 2004.
One person found this helpful

A. BanksReviewed in the United States on January 29, 2011
4.0 out of 5 stars
Not what I remembered
Verified purchase
I remember liking this film a lot more when I was a kid. Of course now that I am older, I realize that it doesn't do George Herman Ruth justice, as a person, or a ball player, making him into an oaf and a clod, a big shambling mess on the ball field. The movie script over simplifies important scenes, makes a big deal out of others that don't seem as though they should be, and glosses over important events entirely. It's still enjoyable, but take it with a grain of salt. More interestingly, watch the two wonderful short films on the special features that the real Babe Ruth made, and compare them to the trainwreck John Goodman portrays. In one Babe goes to an orphanage and teaches a kid how to play baseball, in the other, he steps off a train to play stick ball in a field with some kids. The personality of the real Babe Ruth was what made the man interesting. There are only a few scenes halfway through the film where John Goodman came close to capturing that personality. They should have concentrated on getting their facts straight when they made the movie, rather than trying to get a reaction from the audience. My biggest complaint was that they totally missed the relationship with Gehrig and Ruth. My favorite aspect of the movie was the nostalgia of a time period long gone, that they just don't make very many movies about. Maybe one day, Babe Ruth will get the movie he deserves. Until then, this one will have to do.
7 people found this helpful

Chris DeLaPazReviewed in the United States on October 18, 2013
3.0 out of 5 stars
Entertaining movie
Verified purchase
I enjoyed this movie and thought Goodman did a good job of capturing Babe Ruth's reputation from what I know of it.
The movie followed from Ruth as boy through the end of his career.
Also enjoyed the depiction of the Boston and NY in the 1920's.
My only issue with this would be the ending when Ruth is leaving the field and the boy that was in the hospital bed that he promised to hit as home run for spoke with him and called him the greatest etc.
Having watched this movie back to back with Pride of the Yankees (Lou Gherig story) I felt a moment of Deja Vu which left me wondering did that happen to Ruth or Gherig or did it only happen in Hollywood.

I would recommend this movie

FerentiReviewed in the United States on April 23, 2022
4.0 out of 5 stars
Good but not historically accurate
Verified purchase
Very entertaining movie. Very historically inaccurate. The movie exaggerates Ruth’s feats but is entertaining nonetheless.
One person found this helpful

Joe CarrierReviewed in the United States on March 20, 2021
5.0 out of 5 stars
Babe
Verified purchase
Really enjoyed this movie about Babe Ruth, history is always interesting, movies may not always be accurate about everything, but this is a great movie to enjoy
One person found this helpful

pamReviewed in the United States on February 2, 2022
2.0 out of 5 stars
Love movies, but not this one
Verified purchase
The first half was ok, I guess, but then the story line was disappointing
One person found this helpful
See all reviews
Back to top
Get to Know Us
Make Money with Us
Amazon Payment Products
Let Us Help You
EnglishChoose a language for shopping. United StatesChoose a country/region for shopping.
© 1996-2022, Amazon.com, Inc. or its affiliates