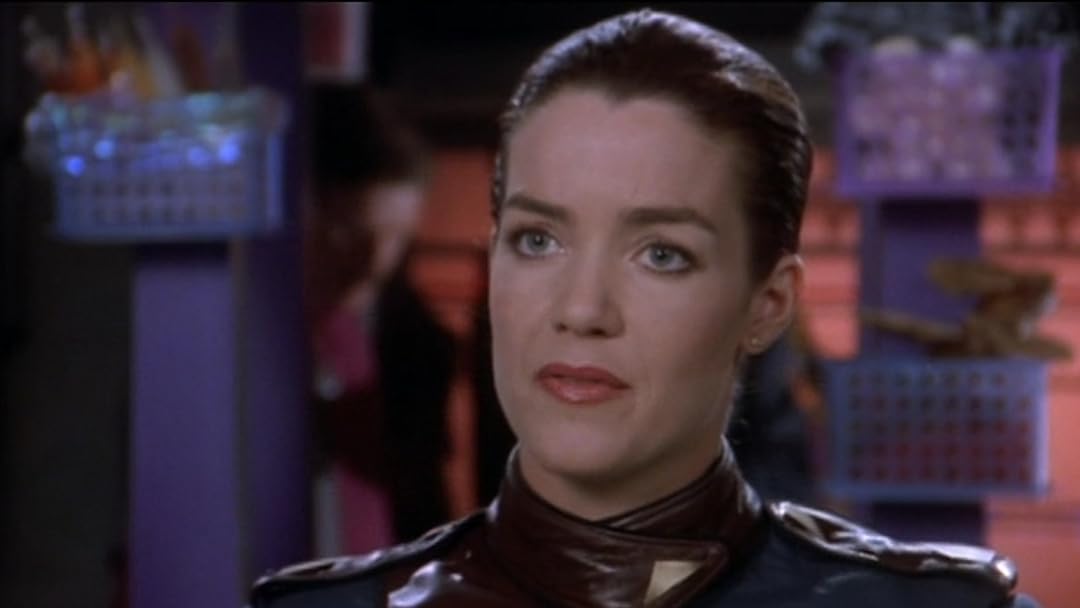 (1,467)
8.31994X-RayTV-PG
All 22 Original Episodes Fully Remastered! 2258 CE. The Earth Alliance has just placed a massive space station, Babylon 5, into orbit around a planet in a neutral corner of a distant galaxy to serve as a refuge for anyone seeking sanctuary from the hostile federations that dominate space.

Mary M. RoeReviewed in the United States on December 28, 2017
5.0 out of 5 stars
And So It Begins...
Verified purchase
Start to finish one of the greatest series of all time. I've seen them all, the Star Treks, the Star Gates, the Battle Stars, etc. but this saga really grabbed you. The cohesion of the story is something that no other American Science Fiction ever pulled off. You come to deeply care for them all, alien and human, you see their flaws and how they rise above those flaws to become more than their promise.
85 people found this helpful

hotdog12Reviewed in the United States on June 12, 2018
5.0 out of 5 stars
The best science fiction series ever made.
Verified purchase
Babylon 5: hand's down the best science fiction series ever made. Odds are you are already a fan of the B5 universe and bought this to rewatch it. Good plan! I already have the DVD boxed sets and the Amazon streaming version is very nearly on par with that image quality. Unfortunately this series was shot back in the small TV days and some of the grand panning shots of spacecraft are distinctly jerky on large modern TVs. I'm not going to go into descriptions of the story and movies, however, since others have already handled these topics. I will add that I originally watched B5 at the same time as Deep Space 9 and the key battle scenes from Babylon 5 made DS9 look pretty lame.

The range of story topics while building the overall thread is astonishing. Most normal television shows feature two or three main characters and maybe half a dozen supporting members. Babylon 5 has at least a dozen central actors and two dozen strong supporting cast members along with terrific cameos and one-time appearances--like "Jack" who determines if Delenn and Sheraton are the right people at the right time at the right place. Or the delightful episode centering around the largely ignored maintenance workers going about their daily jobs as the fate of the galaxy whirls around them.

It just goes on and on--so many fine performances by so many key characters. The soft-spoken Delenn displays her titanium fist in a velvet glove when she drives off aggressive Earth force cruisers or slaps down Neroon of the military faction. G'Kar's constant superb acting and expressions were astonishing despite heavy facial prosthesis. The love-struck loyal and flawed Lennier. Viur Cotto when he gives his little finger waggle to Mr. Morden after wishing to see his head on a pike. The smug Mr. Morden who you want to slap from the first moment he appears. The surprisingly sinister and amoral Bester of the Psi Cops. Great solid performances by commanders John Sheridan and Jeffrey Sinclair.

Just a head's up that Babylon 5 is worth buying and watching again and again.

J. IrvingReviewed in the United States on March 5, 2017
5.0 out of 5 stars
Flawed, but Timeless...
Verified purchase
I already have the Babylon 5 Collection, which includes the entire series (as well as the spin-off series Crusade), and the movies (except for the Legend of the Rangers and The Lost Tales). The one thing it doesn't have is the original broadcast version of The Gathering. The version included in the movie collection is the TNT presentation of The Gathering, which is something of a Director's Cut, with certain scenes edited out, certain previously deleted scenes edited back in, etc. Certain portions of dialogue were re-recorded for the TNT presentation as well.

The original broadcast version of The Gathering is included here on Amazon as a bonus episode of Season 1 digitally, and given the price, I could hardly pass it up, seeing as how it makes an interesting contrast to the TNT presentation, not to mention having the opportunity to see it in its original infamy. :)
32 people found this helpful

SciFiGuyReviewed in the United States on July 18, 2018
3.0 out of 5 stars
Love the plot. Love the show. Hate how it looks on my big, hi-res screen.
Verified purchase
Love the plot. Love the characters. Love the ships. When I watched this the first time it was on my old square, low-res TV and it looked pretty good for a show with CGI from a bunch of standard Amiga PCs. I cannot say enough good about the character development and the 5 year story arch is so far ahead of it's time that if this had been shot by HBO we would still be talking about it like Game of Thrones.

But trying to watch it today on my high-res, wide-screen TV is god-awful!!! I'm sorry. I LOVE this show but it is jarring when they have a scene with CGI in it and instead of going wide (it was shot in wide screen after all) they chose to just drill tighter into the grainy film shot. I guess it was the cheaper way to go back in the 90's. But I truly wish Amazon would fix this problem. Even older TV shows like The Next Generation Trek and the Original Trek have had their CGI remastered so I know that this is not impossible.

That said, I gave it 3 stars because of so many great scenes and the amazing character development. If you don't watch it on a large screen with the lights out etc as we do, you might not notice the issue. Just be aware that if it looks super grainy or the shot seem to jump, it is not your imagination. Enjoy the rest!
17 people found this helpful

J. MullallyReviewed in the United States on June 3, 2017
5.0 out of 5 stars
A sci-fi classic worth watching
Verified purchase
This was one of the best sci-fi series every made Even after all these years, the special effects are great-looking and the character very engaging, both alien and human. This is my favorite season because Sinclair was my favorite commander compared to Bruce Boxleitner in the later series. I like the team work and family atmosphere of the group. Even when Londo and G'Kar argue, you still feel as though they like each other. Endlessly entertaining. Note: Watch The Gathering first, which was the pilot for the show. It's not as goo as the series becomes later but it is helpful as back story referred to in the ongoing series.
12 people found this helpful

Friend of the AdoniReviewed in the United States on February 17, 2021
5.0 out of 5 stars
Science Fiction Done Right
Verified purchase
B5 is Sci Fi done right. The five year story was planned out before the first episode filmed. Each episode carries the story arc forward. Characters are powerful and believable. I wonder why Warner Brothers does not realize the exquisite jewel they have in their vaults and do more with it. It is a forgotten treasure. We are introduced to a vision of the future so much like our own world: split by politics, personal agendas and quests for power. But B5 gives us hope - true hope; that we can rise above the things that divide us and eventually accept those things that bind us. It's a four-year story; but worth the effort to explore it. And not all the secrets are revealed. There is so much more to this series and Warner Brothers needs to bring us back to discover them
One person found this helpful

CrazyBearUSAReviewed in the United States on April 18, 2019
5.0 out of 5 stars
oldie but goodie
Verified purchase
one of the best ever SCI Fi shows ever made I bought the first 3 seasons , one a month last year since was never on TV or never on Prime then it came onto TV and Prime.I have jumped around seen the series all at once. I love every year . The writers wrote the show for 5 years no more no less . a few made for TV movies are out as well some available here or on Goggle they do explain some issues further in detail and another one or two of them were a follow up to a show about the Rangers that lasted a season /two .
I am not sure if it is me or what but today's TV shows just seem to ram social issues down your throat ,political issues , just about everything the writer believes in other then good story line then sends it to special effects to save the show . well back in the day when this was written special effects were not cutting edge so writers had to use a thing called a brain. and this show shows they did. It is worth every season it grows along the 5 seasons cast members mature as well relationships happen and some die as well.
What is so good about about the show is it is almost true to life just in the future with actors that are real to the audience not some Hollywood Icon
I put it in the top 5 best all time shows ever made for TV best 3 sci fi ever made
2 people found this helpful

JohnAroundTheCornerReviewsReviewed in the United States on November 11, 2018
5.0 out of 5 stars
As good now as it was when I first started watching it in its original airings
Verified purchase
I discovered Babylon 5 during the original airing of Season Two episodes, then managed to catch up on Season One. I eventually bought all five seasons on DVD and am now watching it seven nights a week on an OTA channel here.

Babylon Five is a wonderful series. Some people try to say that Deep Space Nine or Babylon Five ripped the other off, but the truth is, in my opinion, that they are totally different series.

Unlike most of the Star Trek universe, the entire five years of B5 was planned out in advance, so even in the first episode of Season One, we see hints about what we will eventually see in Season Five.

Jeffrey Sinclair is Commander of the Babylon Five station in this first season. We eventually learn that this was the fifth such station to be constructed. The first three stations were somehow destroyed after construction. The fourth one disappeared. (We will eventually learn how B4 became an integral part of the B5 universe in later seasons.)

This is a wonderful series, made all the better (more better?) by the fact that the entire season was planned in advance.

Please check it out. it's worth watching.
2 people found this helpful
See all reviews
Back to top
Get to Know Us
Make Money with Us
Amazon Payment Products
Let Us Help You
EnglishChoose a language for shopping. United StatesChoose a country/region for shopping.
© 1996-2021, Amazon.com, Inc. or its affiliates