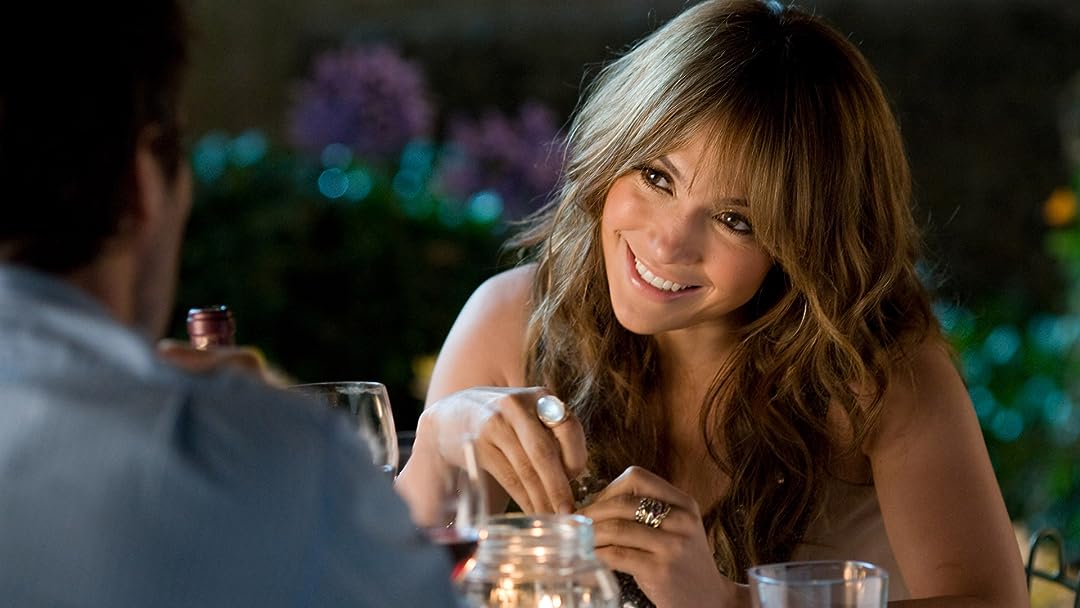 The Back Up Plan

MiniReviewed in the United States on January 20, 2021
4.0 out of 5 stars
A super relatable heroine! Avoidant Attachment Style on full display!
Verified purchase
Zoe (Jennifer Lopez) is a beautiful and successful New York corporate executive-turned-pet shop owner seeking life’s next challenge: a baby. Sick of waiting for Mr. Right, she opts for artificial insemination to achieve her goal. Time’s running out and a girl’s got to do what a girl’s got to do. What are the odds of finding The One AFTER the insemination? Zero to none. And yet it happens. Stan (Alex O’Loughlin) tries to steal Zoe’s cab in one adorable meet-cute! He is immediately smitten, and when he sees her again at his cheese shop at the farmer’s market, he makes it his business to pursue this elusive girl who seems to push him away. Why is she pushing him away? Oh, lots of reasons! Zoe has commitment issues — which explains why she’s still single. But the most powerful reason is that she’s pregnant. The insemination was not only successful, but she’s carrying twins!

This is such a cute movie! It’s also deep. This tells the story of a woman who is clearly an Avoidant — as in Avoidant Attachment Style (not to be confused with Avoidant Attachment Disorder, which stems from social anxiety). The movie does a good job developing Zoe’s psyche, her motives and her stakes. Like most Avoidants, she is independent and has a strong goal-setting mindset. She also has conflicting emotions, longs for intimacy while doing her best to avoid it. Her grandmother is the same way. Zoe also lost her mother at an early age, and was hit with an absentee father — these all contributed to her Avoidant Attachment Style. I am this way, and while I am fighting to overcome this side of me, it still rears its ugly head from time to time. O’Loughlin is wonderful as the man who loves this elusive woman, fighting for her while being terrified of becoming a father. I won’t say more, but this is one interesting rom-com! There are many silly moments as well, mostly from the outstanding supporting cast. Melissa McCarthy, Anthony Anderson, Michaela Watkins, and Linda Lavin also star in this flick.

Downsides? The not-so pretty side of pregnancy. While I applaud a movie that isn’t afraid to show the many hormonal changes a woman goes through during the nine months of her pregnancy, the movie also steers toward over the top, like the woman breast-feeding a three-year-old, and the super-cringe water birth scene (not Zoe’s). That would be enough to scare ANYONE away. This movie made me glad I opted for not having children, though I do question my choice from time to time. Anyway, love it. J. Lo looks so beautiful in this movie. Her bone structure is on fleek! I won’t even bother to elaborate on her mega-toned bod. Must be that perfect Puerto Rican DNA (wink, wink!). Great movie! One of my favorites from Jennie from the Block! Four out of five high-protein matcha smoothies, with banana and pineapple!

AshleyReviewed in the United States on July 16, 2020
3.0 out of 5 stars
Cheesy, predictable and some goofs but overall cute movie
Verified purchase
This movie is incredibly cheesy, predictable and has some goof ups in the editing. Its like a cross over between a horrible lifetime movie and a wanna be Hollywood movie. I gave it a shot because it had Jennifer Lopez in it and she has some cute romantic comedies. But this movie actually made me cringe at some points. Especially as a single parent. The story could've been better. The editing and musical parts were a little over the top.

DougReviewed in the United States on April 26, 2021
3.0 out of 5 stars
We'll watch again
Verified purchase
We rate our DVD's on a 5-star scale. If it's terrible, we give it a one and get rid of it. If we won't watch much again, it gets a 2 and we MAY get rid of it. A 3 means that we'll watch it again, but it's not one of our favorites. A 4 is one that we'll watch over and over again. A 5 (rarely given) is one of our all-time favorites. We'll probably watch this one again, but not all that much.

Christine P. RoseReviewed in the United States on August 19, 2011
4.0 out of 5 stars
*This close* to Perfect
Verified purchase
I have to start out by saying that generally, I am not a person who watches romantic comedies. However, now that I'm purposely taking on movies made by the stars of 'Hawaii Five-0' so I can review them for "Hawaii Five-0 Online," I've begun watching lots of movies I may have steered clear of six months ago.

Having said that, I'm seriously beginning to wonder if there are other gems I've been missing considering I avoid certain genres like the plague. I've seen The Back-up Plan twice now, and as a whole, the movie is hysterically funny and heartfelt, with endearing performances by Alex O'Loughlin (Stan) and Jennifer Lopez (Zoe). And you've just got to love Zoe's dog.

After having watched Mr. O'Loughlin for an entire season of a show where he plays nothing short of a bad-ass guy, albeit with a warmth that bleeds through in even his most butt-kicking moments, it was refreshing to see him in a looser comedic role. The chemistry between him and Ms. Lopez is palpable, and his smiles light up the screen right next to hers.

The story itself, and indeed the movie, were absolute perfection...until it hit a certain point, when it kind of fell apart for me. Now, because this isn't your standard movie review - but instead is my gut reaction to the movie itself - the following is a bit unusual for me. But to say I was disappointed at what had so much potential as a pivotal scene later on in the movie is an understatement. I'm going to warn you, the following contains **SPOILERS** so if you don't want to know about the major conflict from the third act of the movie, don't read the next two paragraphs, which are surrounded by **!

**Right after the giving-birth scene in which Zoe faceplants into the small pool and Stan is so completely shell-shocked he can barely form a coherent sentence, is the scene that did it in for me. What happened was that in a movie that was so cleverly crafted up to that point, we were suddenly thrown one of those embarrassing sitcom misunderstanding moments that not only threw me completely out of a movie I had spent the better part of the evening growing to love, but seemed so awfully contrived and out-of-place that it actually made my gut twist.**

**I'm talking about the moment when Zoe decides that because Stan told "Muffin Girl" that the babies weren't his, it means he doesn't want to be with her or them, and will leave her at some point using that as his excuse. I have to wonder why the director went with that, because as a writer, I can think of at least half a dozen ways the same scene could have gone without Zoe blowing something out of proportion the way you might find a sitcom character doing. In a sitcom, it's fast and funny and (in many cases) deliberately obtuse. In a movie that to this point was such a high-caliber piece of work, it pulled the rug out from under me and made it difficult for me to continue watching...both times.**

Okay, enough spoilers! Once I forced myself past the point mentioned in the paragraphs above, I managed to enjoy the rest of the movie, for the most part...except the parts which referenced the above incident. Linda Lavin was glorious as Zoe's grandmother, and we even got Tom Bosley thrown in for good measure! They were absolutely adorable as a couple.

I would have given this movie hands-down rave reviews up one side and down the other with the full amount of stars I could give if it hadn't been for my point mentioned above. But still and all? You definitely should see this movie. Lopez and O'Loughlin are brilliant together. They are both incredible actors with lots of talent and a gift for making you love their characters.

And for those of you who are die-hard 'Five-0' fans, there's nothing better than seeing the man you watch on TV every week doing something different. O'Loughlin fans the world `round, who've followed him for his entire career, will tell you, "Eh, we always knew he was that talented." For those of you who don't yet know, buy this movie and find out for yourselves.
11 people found this helpful

ZhazhaReviewed in the United States on September 10, 2018
3.0 out of 5 stars
Funny/ makeout-sex sections
Verified purchase
Its was great funny romanic comedy BUT too much making out n sex like scences i would not recommend watching it. Without the sex scences i would have given it a 4 star.
4 people found this helpful

Vicki HopkinsReviewed in the United States on November 7, 2010
3.0 out of 5 stars
Could Have Been Better
Verified purchase
Crude? I agree, it was crude in places, especially the 3 year old breast feeding and the woman giving birth. Other parts were somewhat laughable as far as what women go through being pregnant. If you can't laugh about what it does to your body, let's face it, you'll just cry and be depressed. Same with having kids. The awful and the wonderful, and even when they're grown, it's the same story.

Lopez wasn't her best, I agree. She seemed to be floating throughout the story with no real depth, but that's probably because the movie wasn't real deep either. $3.99 on demand was a fair price for a few hours.

However, the better twist to the story would have been her boyfriend was the sperm donor. That would have made it far more heartfelt knowing the children were really his. What would be the possibilities? Endless.
4 people found this helpful

ReaderReviewed in the United States on May 24, 2014
3.0 out of 5 stars
Dissapointed again
Verified purchase
I am a big fan of Jennifer Lopez. I love her style and down to earth quality. She seems to just get more and more beautiful as she gets older but what is up with her movies? It seems that she gets a great story line and she is gorgeous but the directing or something falls short and you end up critical and disappointed. I am so sorry to say the same of this movie. I like both stars of this movie but it just did not work for me. He was madly in love and then nonsensically critical. She was adorable but never seemed to really break through. I can't even pinpoint the exact problem. It just didn't work.
3 people found this helpful

Raven ZReviewed in the United States on April 17, 2019
5.0 out of 5 stars
A funny romp
Verified purchase
Not a fan of Jennifer Lopez, but she did really well with this movie. Love Alex Oloughlin and he was as fantastic as always. It’s a fun, touching movie that’s worth it for the entertainment value.
See all reviews
Back to top
Get to Know Us
Make Money with Us
Amazon Payment Products
Let Us Help You
EnglishChoose a language for shopping. United StatesChoose a country/region for shopping.
© 1996-2021, Amazon.com, Inc. or its affiliates