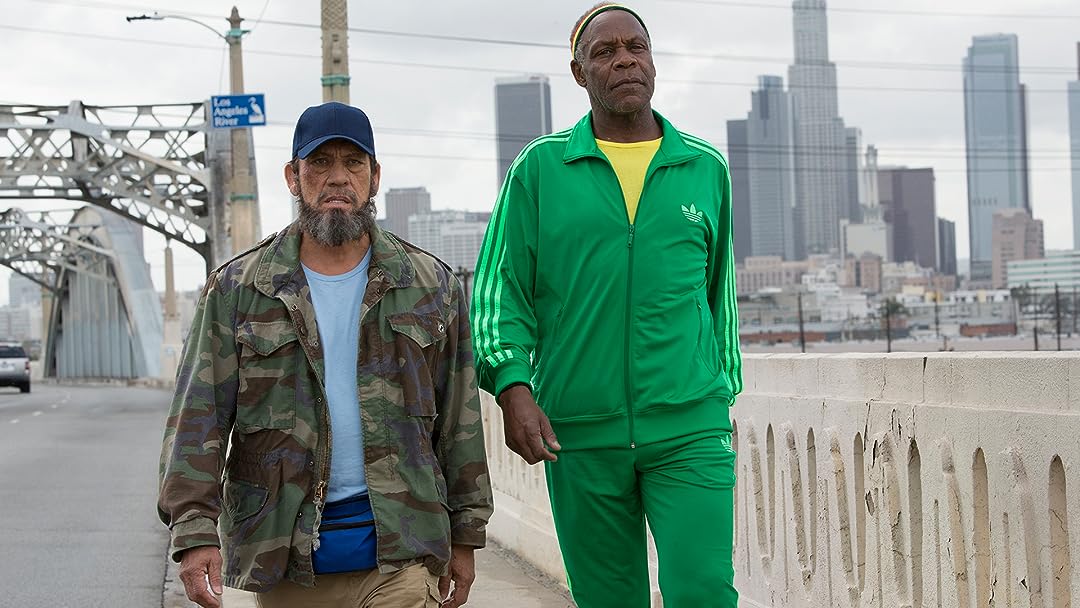 TrejofanReviewed in the United States on April 19, 2014
4.0 out of 5 stars
My two favorite Dans did a good job of entertaining me
Verified purchase
I just watched this movie last night. I bought it because the Dannies Glover and Trejo were in it together. I've adored Mr. Glover for years and really enjoyed all of his performances in the "Lethal Weapon" movies and everywhere else I could find him. Although I have no idea how old Mr. Glover is, I know that Mr. Trejo is almost 70. I would never have guessed it. Although Mr. Trejo tried to look like an aging boxer, a glimpse at his massive back and shoulder muscles in his thong backed tank top at the beginning of the movie tells the truth(Thank you, producers and directors, for that scene!). He also sported an impressive beard which is about the only way possible to make him look old--was it natural or make up? Mr. Glover has one of those adorable faces that you just can't resist and both of these wonderful gents are very lovable in this movie. I loved the scene where they dressed for their adventure in crime fighting and each has a closet full of identical sets of clothing. I also loved that they took public transportation--taxi's and buses. I loved the scene with Lonnie love in the property department of the police station. I loved the scene in the college dorm where Mr. Glover impresses the cute college co-ed who is pretty much naked, and I always love that the Dannies ended up with the girls. The movie is a playful romp through Los Angeles (one of the arch baddies talks about the pacific coast highway (PCH)) with the Dannies laying waste to all of the drug smuggling bad guys in pursuit of a murderer, a diplomat with immunity to everything, even to good taste and intelligence it seems. But he is no match for the delightful Dannies.

I will be keeping this for my collection and will be watching it again!

By CJs PirateReviewed in the United States on October 12, 2016
3.0 out of 5 stars
Lame Story but Lovable Characters
Verified purchase
This movie worked for me as a typical "Buddy Flick" with Trejo and Glover sharing the spotlight. In typical Trejo Bad Ass fashion someone's heinie needs a serious kicking and he feels the need to step up.

Trejo isn't known for his ability to act but he does manage to make you like him in spite of it all. Glover steps out of his comfort zone in more ways than one. He doesn't often play a second fiddle/back up guy (unless you count Mel Gibson's films). His character also steps out of his comfort zone when Trejo's character is taking a beating. The stick work was awesome, actually. The stunt work rocked in this scene.

It's a given the two work well together. From what is said, Trejo is well respected in Fantasyland and Glover has oodles of años experience. The story line is lame but the characters are lovable.

B.E. LewisReviewed in the United States on April 28, 2014
5.0 out of 5 stars
Fun like they used to make 'em!
Verified purchase
First, this is an action comedy. It's not a drama. It's the same genre as the old "Lethal Weapon" and "48 Hours" and "Beverly Hills Cop" movies - except with the updated humor and sophistication of the best of Schwarzenegger et al. Light, nonstop, hilarious, action-packed, irreverent, violent, fun. The banter is perfect between Glover and Trejo - and I hope "the Dannys" make a few sequels together. It would only work together. The chemistry is a crucial component of why this works. (Such as when Glover calls Trejo a "damn Mexican MacGuyver" after they make an escape.) Watch it expecting nothing more or less than popcorn-munching fun, and you'll enjoy it the way it's meant to be enjoyed.
Note: brief topless nudity. Violence sometimes intense, probably not appropriate for kids. F-bombs throughout.
12 people found this helpful

Slicktek50Reviewed in the United States on September 13, 2016
4.0 out of 5 stars
Funny and Entertaining Movie
Verified purchase
I sat down and watch this movie as a filler for boredom. I'm glad I did. I have watched other movies that these guys have been in and both were always in some sort of action flick. I got no less in this movie. I'm glad I did watch it. It was funny at times, and most of all entertaining. I know that Danny Trejo is not a trained actor but he is no less an actor because of it. He plays in movies that he fits into and stays in it without being fully stereotyped.

Danny Glover is has been around for quite sometime and is a trained actor. He is very funny in a different way always giving that serious deadpan but funny feeling.

Both of these guys together in the this movie was a good mix. They brought the point of the movie too you and made you get the feeling of wanting to be involved or a part of the movie. You are routing for them is what I mean. This wasn't a great memorable movie but it was very good as a time filler.
One person found this helpful

Alexander GarciaReviewed in the United States on October 25, 2014
5.0 out of 5 stars
If you loved the first one, you will love this
Verified purchase
I enjoyed the original "Bad Ass" movie, so I looked forward to this sequel when I heard about its release. The sequel has the good idea of giving the lead character an equally old and grumpy partner, and the two Danny's (Trejo and Glover) playing the leads manage to generate some great chemistry. It also helps that their characters have been written to be very likable not just together, but apart. The movie has generally good production values and moves from scene to scene fairly quickly, so there are no boring parts. Don't get me wrong, this movie is not perfect. The movie cheapens out at one point by extensively using footage from the 1990 movie "Narrow Margin". Also, the movie's mix of yuk-yuk comedy with hard violence does give the movie an inconsistent (and weird) feeling at times. Fortunately, there's more good stuff than disappointing material here. So if you liked the first movie, chances are you'll like this sequel.
One person found this helpful

Bruce WinningReviewed in the United States on June 4, 2020
5.0 out of 5 stars
the action and violence is exactly what I want on TV
Verified purchase
This is the second of the series. I watched the third first and the first second. They are all good for me and I watched them on 3 consecutive days. I like the punching and kicking and the heroes do this well.
One person found this helpful

RHReviewed in the United States on September 22, 2016
4.0 out of 5 stars
Good action, comedy movie
Verified purchase
Very entertaining, funny, though, often violent movie. I enjoyed it because there was a lot of action that kept my interest. Danny Trejo was his typical self exhibiting cutthroat beat downs one moment and genuine compassion and gentleness other times. Danny Glover was a good addition where he showed his comic and combative sides with ease. It reminded me of his "Lethal Weapon" movies with Mel Gibson. The plot was predictable but the movie was entertaining to watch.

Br. MatthewReviewed in the United States on March 10, 2020
4.0 out of 5 stars
Fun
Verified purchase
This is not Shakespeare, just a goofy film that satisfies the formula. Trejo plays a very likable unsung hero. Glover plays the comic foil sidekick. Villians clearly cross the line. Retribution is served.
One person found this helpful
See all reviews
Back to top
Get to Know Us
Make Money with Us
Amazon Payment Products
Let Us Help You
EnglishChoose a language for shopping. United StatesChoose a country/region for shopping.
© 1996-2022, Amazon.com, Inc. or its affiliates