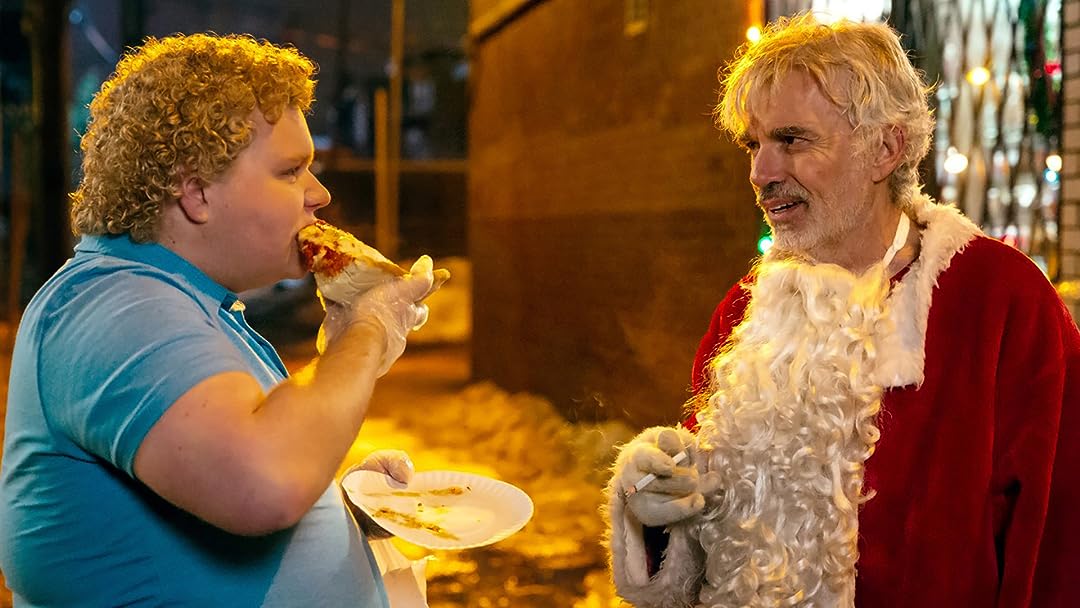 (4,152)5.61 h 34 min2016R
Fueled by cheap whiskey, greed and hatred, Willie teams up once again with his angry little sidekick, Marcus, to knock off a Chicago charity on Christmas Eve. Along for the ride is ‘the kid’ - chubby and cheery Thurman Merman, a 250-pound ray of sunshine who brings out Willie’s sliver of humanity.

J. BreseeReviewed in the United States on July 19, 2018
1.0 out of 5 stars
Stay away if you want to keep your good memories about the first film!
Verified purchase
One of the worst movies I've ever seen! It's like they didn't know what they wanted to do with the movie and I tried to go immediately to sex jokes. What was good about the first film was it it was a bit shocking and fresh this was just a really bad slap together pile of garbage. I'm not one of those people that likes to put down movies very often but this definitely is in my bottom three of all time. If you love Bad Santa 1 do not see this you'll just ruin your rosy image of it. I like the idea of having Kathy Bates in the movie but the movie didn't know what it wanted to do and it really didn't have a purpose and it flounder like a fish caught on land baking in the Sun!
12 people found this helpful

KortReviewed in the United States on December 22, 2019
3.0 out of 5 stars
Bad Santa 1 Is Still The Best
Verified purchase
If you *really* like Bad Santa, and want more raunchy Christmas humor, then BS2 might be for you. I say "might" because there were times I just didn't feel it, and BS1 is a holiday standard in our home. It carries on the tradition, but not as well as the first movie.

In the first movie, Billy Bob (Willy) was Bad Santa, and he was the focus. Here, he's almost a bit player and not so much of a Santa anymore. The Kid (Thurman Merman) doesn't have the same innocent impact he had in the initial role. Marcus is back, but there are no surprised here anymore. Kathy Bates shines, but seems limited by the script to be nearly a 1-dimensional baddie. Previous luminaries like John Ritter and Bernie Mack are missed, as their stand-ins just don't have the same gravitas. Sue's replacement, Christina Hendricks, does a decent job, but the acting seems a bit forced.

Overall, I enjoyed it, though I thought there were some scenes that were over the top just for the sake of shock value. Sure, the first movie did that too, but there wasn't anything to compare it to at that point. This film suffers from a 13 year gap that tried to keep the charactesr fresh, but new audiences may not have a history with the original 2003 film. Bad Santa 1 will always be a top 10 Holiday Movie for me, but BS2 may only be something I watch if it is on and I happen across it. Long live the original.

Mike MReviewed in the United States on December 26, 2020
4.0 out of 5 stars
Bad Santa 2 grew on me
Verified purchase
I didn’t like this movie at all the first time I watched it. In fact, I hated it because it wasn’t as nearly as good as the first. But after I watched it again, then again I began to really like it and realize it wasn’t supposed to be like the first.

To say it’s raunchy, is an understatement. It’s a fun movie, and a departure from the traditional fuzzy feel good Christmas movies. You may not like it the first time you watch it if you’re a real fan of the first one, but give it another chance or a third chance and you might change your mind on it like I did.
3 people found this helpful

J. WestReviewed in the United States on December 23, 2020
5.0 out of 5 stars
"Bad Santa Is Back With Vengeance!"
Verified purchase
I thought I could buy the 2nd one because I thought the first one was Off-Color hilariously funny. Billy Bob Thornton had a absolutely brilliant role. Disappointing that Lauren Graham couldn't be in it. But surprisingly Kathy Bates agreed to play Willie's mother. Absolutely perfect. I admit Christina Hendricks is a gorgeous and talented actress. She made the role like she was born into it. Gladly Tony Cox and Brett Kelly came back. That's cool. I recommend this if you'll love Off-Color joke films like this one.
One person found this helpful

errin spellingReviewed in the United States on April 7, 2019
5.0 out of 5 stars
Better than Bad Santa 1
Verified purchase
His mother is an evil woman. Kathy Bates is great in this part. It's too bad ,Santa doesn't have the same girlfriend, but everyone else is the same. There aren't enough sandwiches in this movie. There are a lot of very bad words, every other minute. This movie is not for children. When they say bad, they mean bad.
6 people found this helpful

AaronSReviewed in the United States on April 28, 2017
3.0 out of 5 stars
Okay but not as good as part 1. Rent it if you want to see it. Buying it will make you feel like you wasted some money.
Verified purchase
As a major fan of the first movie I didn't find this movie quite as entertaining. The humor was less enjoyable than the first. Though still a very raunchy movie from a profanity standpoint which will make you laugh repeatedly, if you are in to that type of comedy, it doesn't square up to the first one. You really have to watch it if you liked the first movie but be prepared to not be as amused as you were in the first one. I would definitely rent vs buy.
6 people found this helpful

TrivextaReviewed in the United States on December 10, 2019
1.0 out of 5 stars
Raunchy....terrible
Verified purchase
The first one was good. If you like raunchy sex and alcoholism, then this movie is for you. I thought I was going to be laughing and having a good time like I did with BadSanta1. But no, all this movie did was make me feel disgusted. Its too bad they did this. Maybe the people of today "like" raunchy and sickening, I don't know. Do not let your kids see this movie.....I am no prude by any means.....but this movie sucks.
One person found this helpful
See all reviews
Back to top
Get to Know Us
Make Money with Us
Amazon Payment Products
Let Us Help You
EnglishChoose a language for shopping. United StatesChoose a country/region for shopping.
© 1996-2021, Amazon.com, Inc. or its affiliates