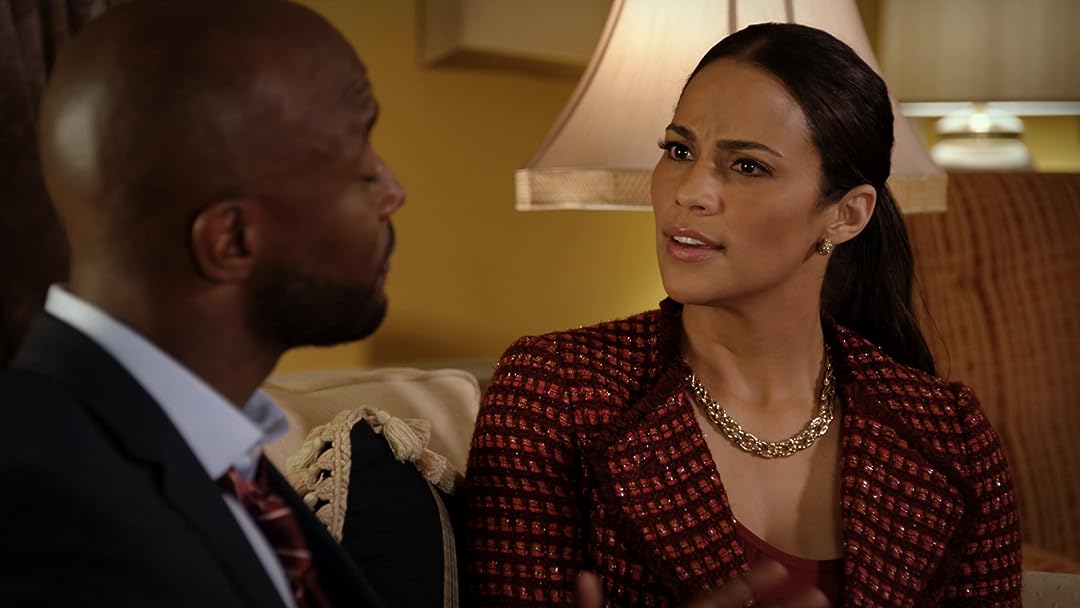 JLGReviewed in the United States on August 6, 2015
5.0 out of 5 stars
Predictable, yes. Hilarious, yes. Feel-good flick, definitely.
Verified purchase
As other reviews have noted, anyone who has ever seen a rom-com at least once in their life can figure out who the knight in shining armor will be in the end, probably in five minutes or less. However, this film is well acted and offers a lot of good laughs! I personally do not buy or consider buying movies too often, my DVD and streaming collection combined is probably less than 20. This was a delight, "Baggage Claim" is a light, feel-good flick that made me laugh out loud several times, and has a good message albeit a predictable ending; I enjoyed it so much I would definitely consider purchasing it, or at least adding it to my wishlist for later gifting.

The movie is based around Montana (Paula Patton) who is a flight attendant, she feels she is not a woman nor a lady unless she marries ASAP because she is already 30. Both Montana and younger sister Sheree (Lauren London) were taught by their mother Catherine (Jenifer Lewis - I've yet to a movie of hers I didn't like) the importance of getting married and starting a family by the age of 30, even though she herself has been married/divorced five times. Montana is on a mission to find Mr. Right within 30 days and with the help of fellow flight attendants and best friends Gail (Jill Scott) and Sam (Adam Brody) put together a plot to find ex-boyfriends as they travel during the holiday season. The flight attendants enlist airport personnel to assist in finding the ex's and making sure Montana is on their plane; the airport crew are hilarious and it's worth renting/buying the flick for them alone. The airport crew consists of curb-side luggage clerk Calvin (Ricky Smiley), check-in agent Tanya (La La Anthony), TSA Cedric (Affion Crockett), and one more who I cannot recall. For those that remember "Sister, Sister" or watch the reality show, Tia Mowry has a cameo as a "crazy" girlfriend, another funny part in the movie. The smaller role of Langston (Taye Diggs), a "Black Libertarian" who wishes Montana was obedient like his beloved dog Juicy, offers even more laughs throughout the film.

Ceej of Ceej's Life ReadsReviewed in the United States on June 27, 2018
3.0 out of 5 stars
Good movie for background noise.
Verified purchase
This is a good movie to play for background noise. There are some good points about not settling or doing things for the wrong reasons, so that's a one star. And there are moments that are funny, so that's another star. There are handsome black men, and that's always a star in my book. However, Paula Patton's facial expressions are very off-putting and Jill Scott's character is cringeworthy, so they blocked off any chance of other stars. I'm wondering if this was worth the money I paid.
3 people found this helpful

Robyn B. McgormReviewed in the United States on April 6, 2015
5.0 out of 5 stars
Wonderful first class show
Verified purchase
Well there is always a first and this show has it all, Actors and storyline are fantastic with just a bit of this and that will throw all things together. A story of a airhost stewardess running and catching planes all over the world trying to find Mister Right, When she meets this senator running for congress, who buys everything he wants and rules with a iron hand just ask the dog, he'll back me up on this, when told to go to toilet he goes no questions asked or barking anyway! Yes the comedy is in there where two friends lend a hand in different schemes. Very touching to a point I would have to say I liked it and would recommend to all. I rated this an A grade plus for being different in some ways and holding my attention throughout the entire show. Now I have told you some of it there will be no more hints, now it's your turn to make a move so collect the movie pick up some popcorn at the corner shop for a wonderful night of full on entertainment that will astound you and have you thinking. Enjoy!
2 people found this helpful

coastgrlReviewed in the United States on January 28, 2022
5.0 out of 5 stars
best of the rom com bunch
Verified purchase
As other reviews mention, predictable ending and at this point (2022) sort of comedic about the rush to be married at 30, but ... this is a best in class of the rom coms. Superbly cast across the board, near perfect comedic timing, amazing editing and a never ending parade of gorgeous men, most with hilarious fatal flaws (relatable to any woman who's dated on a mission). A bunch of cliches but well placed. Chick flick A++.

M. P. G.Reviewed in the United States on March 11, 2014
5.0 out of 5 stars
One of the BEST movie romantic comedies to come out in a long time.
Verified purchase
This is an incredibly well written movie script. It is the BEST movie of 2013. The plot is well written. It is funny at times. It's about trying to hard to find Mr. Right and realizing that Mr. Right is your best friend of many years. Paula Patton in her best feature starring lead role yet as the love seeking character Montana -- except that the character is not trying to find Mr. Right because she wants to, but because of the societal pressures put upon women to be married by a certain age. For the character Montana, all the pressures to be married are coming from her mother and family and friends. This really is an enjoyable family movie with a good soundtrack and some good comedy relief throughout the movie. Good non-stop action throughout the entire film so it never gets boring. Literally, the BEST movie to come out in 2013. It should have gotten more recognition at the box office. Saw it in the movie theatre and decided this is a bought DVD as soon as it comes out. Paula Patton as the lead actress does an incredible job throughout the whole movie.

David E. BaldwinReviewed in the United States on October 10, 2014
4.0 out of 5 stars
Finding Mr. (W)Right
Verified purchase
Stop me if you haven't heard this one before. Thirtysomething spinster feels pressured to get hitched after her college age sister announces her nuptials. Thitysomething looks up old beaus to find out if any of them are matrimonial material oblivious to her obvious soulmate right under her nose. Cliched, yes, but this flick works primarily because it gives its intended audience exactly what it wants. It also works because the predominately African-American cast is charming and appealing. The film deviates from its Caucasian ilk by offering a gay white flight attendant subbing in place of the black ones offered up in white rom-coms. My only regret is that I didn't watch this with my wife who is a connoseuer of this film type.
One person found this helpful

C. JazzReviewed in the United States on September 8, 2014
5.0 out of 5 stars
Great ensemble cast - Worth if for Tia Mowry & Djimon Hounsou alone!
Verified purchase
Very nice ensemble cast & story scenes. I watched it a few times, evaluating appropriateness for teens in our family, and laughed every time watching the Tia Mowry and high school prom dance flashback (New Edition) scenes. Reminds me of watching Doris Day romance movies but more realistic & updated with a 'Pretty Woman' nod. Appreciating Jill Scott in comedy, Adam Brody, and being a Paula Patton fan since Idlewild & Deja Vu. May buy this one for my Paula Patton library!

NICE cameo & well written scene with Ned Beatty. Makes me curious to go see a play by David E. Talbert, and what a thriller would look like authored by him. Introduced Trey Songz (to me), as an actor whose career I'll be curious to watch.

Carmine S.Reviewed in the United States on April 25, 2022
1.0 out of 5 stars
A very few hilarious scenes
Verified purchase
The very few hilarious scenes are probably only that, if you fly or work at an airport. Had I known those were the only good part(s) I would have lived with my the jokes my co-worker threw around and left it at that.
Please don’t waste your life watching this movie
See all reviews
Back to top
Get to Know Us
Make Money with Us
Amazon Payment Products
Let Us Help You
EnglishChoose a language for shopping. United StatesChoose a country/region for shopping.
© 1996-2022, Amazon.com, Inc. or its affiliates