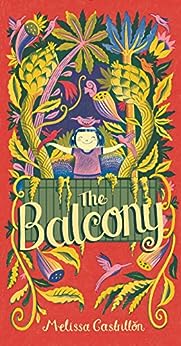 Melissa Castrillón is a freelance illustrator currently based in Cambridge, England. She grew up in a small town called Hitchin and moved to Cambridge eight years ago, where she earned a First class Honors Degree in illustration. In 2014 she earned a Master’s Degree in children’s book illustration at the Cambridge School of Art. She is the illustrator of If I Had a Little Dream and Yellow Kayak, and the author-illustrator of The Balcony. --This text refers to an alternate kindle_edition edition.
Read more

4.7 out of 5 stars
4.7 out of 5
65 global ratings
How are ratings calculated?
To calculate the overall star rating and percentage breakdown by star, we don’t use a simple average. Instead, our system considers things like how recent a review is and if the reviewer bought the item on Amazon. It also analyzes reviews to verify trustworthiness.
Top reviews

There are 0 reviews and 11 ratings from the United States

Mark A. Swan
5.0 out of 5 stars gorgeous book
Reviewed in the United Kingdom on May 6, 2021
Verified Purchase
amazing illustrations and great value we bought 3 copies as 2 were for gifts
Read more
Report abuse