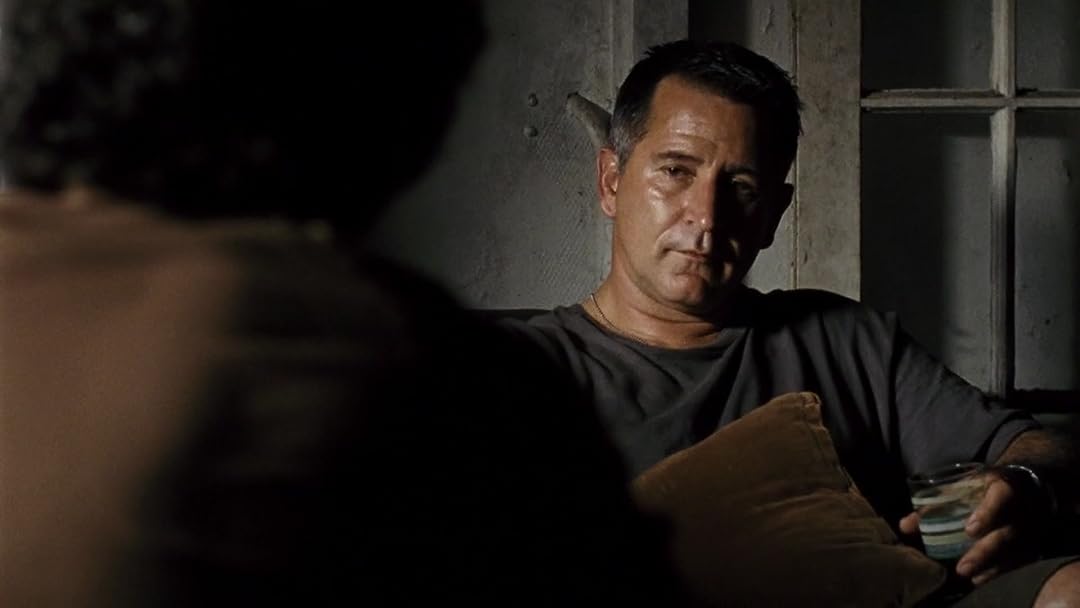 (46)
7.01 h 51 min200916+
Based on a remarkable true story, The Balibo Conspiracy is a tense piece of bravado film-making, and engaging thriller in the vein of Costa Gavras's 'Missing' and 'The Constant Gardener'.

Mormor i hinterlandReviewed in the United States on March 5, 2019
5.0 out of 5 stars
An Excellent Film on 5 Australian Journalists Who Disappeared Covering the Invasion of East Timor
Verified purchase
While Noam Chomsky wrote copiously on the takeover of East Timor—the uncovered by Western media massacre of its people—this Australian film captures the very beginning of the conflict, the acquisition of East Timor, a former Portuguese colony, by Indonesia for its abundant resources under the ill-conceived and unproven rally cry of "Communism." Deeming a foreign government "Communists" had worked for the Americans in SE Asia, why not the Indonesians? Who, it must be pointed out, were contemporaneously ruled by a venal and murderous dictator, Suharto, who had a track record of killing foreign and domestic journalists. This ruse essentially worked: the Indonesians used American-made helicopters and ships, paid for in British pounds. It was also rumored at the time (and in the film), later verified, that Henry Kissinger, Secretary of State for the American Government led by Gerald Ford, was an advisor to the Indonesian dictator, Suharto. This film primarily concentrates on the disappearance of five Australian journalists who covered the beginning of the Indonesian invasion, and whose vanishing is being explored by a sixth, and somewhat unwilling, Australian journalist, Roger East, who is portrayed with nuance and gravitas by Anthony LaPaglia (in fact, I think this is one of his best films). His relationship with his job procurator and guide, Antonio, who has his agenda, is wonderfully conceived and realized.
The danger Mr. East wanders into is unexpected, although he was adequately warned; he feels at a gut level, even though experienced enough to know better, that his citizenship and white skin will render him bulletproof. LaPaglia telegraphs this Western arrogance in such a realistic and undramatic fashion that his subtlety makes the film much more believable, let alone watchable. As a contrast, the director goes to lengths to render the Timorese people, both the military and the citizens, to be more than props for a film whose focus is on the disappearance of the five white Australian journalists. The film is an excellent endeavor and one that is worth watching; I started it with rather modest expectations and was more than pleasantly surprised at its depth of acting and focus, highly recommended for those who enjoy political dramas and thrillers.
41 people found this helpful

Charles DawsonReviewed in the United States on February 19, 2019
1.0 out of 5 stars
Very Very Thin
Verified purchase
There is a story here, but it is poorly told. Rather than address the scope of events, the film takes a small, slice-of-life approach that neither enlightens nor explains. This low budget approach does not engage the viewer and turns a serious event into a humdrum, banal, walk. A much better sense of the horrors of Indonesian rule was provided by "A Year of Living Dangerously". The reviewers who likened this to "Z" did their readers a huge disservice. I think film buffs will find this interesting as a treasure trove of how to ruin a movie decisions. For anyone looking for the story, skip forward to the displayed commentary just before the end credits. Otherwise, a sadly unwatchable film.
15 people found this helpful

PeachyPatReviewed in the United States on January 22, 2019
5.0 out of 5 stars
Real life on film
Verified purchase
This movie takes the viewer into the invasion of East Timor and the journalists trying to document what is happening, I felt I was watching a news reel or a home movie as the action was taking place. So many times small countries have been ignored by the, so-called, super powers. People and governments left to die because another country/nation/people want to take something that is not theirs. It is heart-wrenching to see what happens as the invasion unfolds. Once again, I am overcome with sadness for the people of this beautiful country and glad that I watched this story unfold.
17 people found this helpful

cgullReviewed in the United States on January 31, 2019
5.0 out of 5 stars
Verite at its best
Verified purchase
Anthony LaPaglia has you believing thoroughly that he is the actual person he is portraying. You will be completely overtaken by this true story, Yes, you will shed a tear. Just remember that these things are still happening in many parts of the world. Be watchful of conniving dictators and would be authoritarians and their enabler oligarchs that support them. Sound familiar?
15 people found this helpful

MargotReviewed in the United States on March 30, 2019
5.0 out of 5 stars
Excellent movie
Verified purchase
The story of 5 Australian journalists murdered in E. Timor by the invading Indonesian military is experienced through the perspective of an empathetic journalist and told by an indigenous woman who witnessed the Timorese events. "The Balibo Conspiracy" acknowledges the global military support for the Indonesian military and the silence of world news media. The movie never loses sight of the true cost of war, its devastating impact on humanity and the draconian brutality of the invading Indonesian military. The best part of the movie are the people. They're not playing "characters," they're authentic and genuine.
7 people found this helpful

JeffReviewed in the United States on May 6, 2019
5.0 out of 5 stars
Forgotten atrocity of East Timor
Verified purchase
While the movie is based on a real story that tragedely ends it also highlights the cowardness of politicians worldwide when it comes to free press and protecting it's people. East Timor, an island 99% probably never heard of is the main story here that was invaded by Indonesia after Portugal left it on it's own devices soon after it left it's previous colony.
The story is about 5 journalists (+1 later) that were murdered and one Australian journalist that got executed on the day off the official invasion and the denial of the government's to this day that it ever happened. It's a great kinda documentary movie, at some times a bit hard to watch but great acting all around. Worth your time.
6 people found this helpful

J. JanosReviewed in the United States on April 25, 2020
2.0 out of 5 stars
Important Events That Needed Revelations But The Misinformed Movie Covered Up Much Reality!
Verified purchase
Movie started out in such a slow pace if a Prosecutor seeking Justice would have been Bewildered, Confused, and another example of Lazy Journalism mix in Poor Screenplay Writing with even worse Directing. Bollywood, Globalwood, and Hollywood's Young Turks keep scenes too long and without any purposes thinking it their Visionary Art from their Brains. They lack the knowledge that all Intelligence comes from the Heart that create the everlasting messages of story on screen. For example, just like the 3 Minute Plane Scene landing in Dunkirk Movie that did not mentioned the sacrifice made by 4,000 British Troops in Calais, France that held up the German Advance to save the Troops?

Additionally, the Movie blames the wrong philosophies and adopts a Communism Bent Theme instead blaming others Power, Money, and Resources. Surprised that Allen Bank that Finances Movie Projects OK it but it is known to have a good culture. Allen Bank being extremely secretive with its "Black Box" internal decisions are made behind strictly closed doors, little communication within the lack of "Home-Grown Analysts. The Movie should have paid more attention to the "Berkeley Mafia" group of American educated Indonesian Economists given technocratic positions by Suharto in Indonesia in the late 1960s that led to the Tragedies of East Timor in 1975 and notable Successes later.

Still, Indonesia is a success story in Third World development, having triumphed over a stagnant, stains of pain of Soviet Communists Style Command Economy. Indonesia provided clues on Reform for the Former USSR Republics. Today, the same goes for One China Communist Party System that is burden for all remarkable People in Asia. Local and Global Economies require Multiple Party Systems of Competing Ideas, Mutual innovations and Freedom for Individuals to thrive not a Small Communists Elite of Billionaires to survive in global residence's luxury?

The Film deserves 1 Star for not pointing this out! As well as, misusing the Acting Talent and why had to give it 2 Stars. The Directors, Writers and Film Editors exploited the Actors, Extras, and the Glory of telling a true Tragic Story.
One person found this helpful

Isis McReviewed in the United States on February 20, 2019
3.0 out of 5 stars
A traumatic story about one of the many human atrocities in world's history
Verified purchase
Docudramas like this one can be tough to watch, but many of us do it because if we do not know about it, we will let it continue happening. East Timor, an unknown tiny island/country next to Indonesia, suffered the tyranny of Portugal right after becoming independent, Indonesia invaded it while the world did nothing to stop the massacres. 6 Australian journalists went there to inform their country, perhaps force the UN to get involved. The reports were terrific as the footage they were able to release. However, the Indonesians are not happy about it, caught them and killed them. The story is the narrative of the last of the victims of the Indonesian military.
It is essential to learn about disastrous times in other countries and perhaps to get involved by advocating towards pushing industrial nations to propel international organizations to expose the truths that often remain silent.
The movie, although possibly not 100% accurate is well made. It maintains a decent rhythm to engage the viewer (possible the reason for the inaccuracies), and the performers deliver acceptable performances. It is not the quality of the making of this movie what matters but how it presents an issue that was mostly an oversight by the world.
I give three stars to the film for a film well made but not outstanding.
One person found this helpful
See all reviews
Back to top
Get to Know Us
Make Money with Us
Amazon Payment Products
Let Us Help You
EnglishChoose a language for shopping. United StatesChoose a country/region for shopping.
© 1996-2022, Amazon.com, Inc. or its affiliates