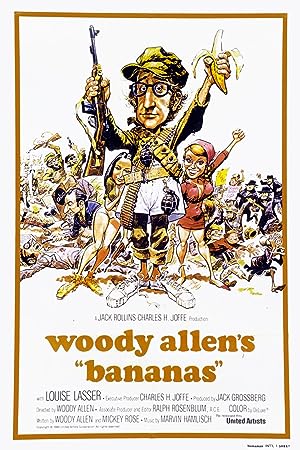 (234)7.01 h 21 min1971PG-13
Woody Allen's humor is at his wild and bizarre best in this story of a "weird-gadget" tester who, after being jilted by his girlfriend (Louise Lasser), ends up as president of a tiny country where absurdity reigns.

joel wingReviewed in the United States on March 23, 2020
4.0 out of 5 stars
Woody Allen at his best Not so neurotic and plenty of jokes
Verified purchase
Bananas was Woody Allen’s fifth film. It is a political satire of the U.S. fight against communism, American leftists, and Latin American revolutionaries.

The movie stars Fielding Mellish (Woody Allen) as a hopeless New Yorker. He goes to the fictional country of San Marcos and gets caught in the middle of the war by the revolutionaries to overthrow the dictatorship. This is where the movie pans politics.

For example, he meets the dictator and brings cake. The dictator’s aides get mad because he only brought one kind of cake instead of an assortment. Later, Fielding joins the guerrillas. They run out of food and he is told to go into town and get supplies. He orders 700 sandwiches, coffee and soft drinks. When it’s time to pay the bill he says they’re with the rebels and pulls a gun on them. It's just one hilarious and ridiculous situation after another with no real stop. It showed great writing and comedic minds by Allen and Mickey Rose.

To me Woody Allen’s early movies were really his best. He put in a ton of jokes and there wasn’t as much neurotic dialogue as he would be known for later. Bananas is a perfect example of his early humor and it really is a standout.
C

cc5449Reviewed in the United States on April 21, 2021
5.0 out of 5 stars
Still crazy after all these years!
Verified purchase
Insanely funny film still. It's been many decades since I first watched this movie & still almost bust a gut laughing at some of the more zany scenes: the revolutionary leader dictating all the new edicts once he takes power, or the translator greeting El Presidente at the airplane in the US etc.
I introduced this film to some teens, but they didn't understand most of the humor about the CIA and coups and South American dictators that anyone from the 1950s, 60s or 70s would understand. They enjoyed the first part of the film but said it went downhill from there. Woody Allen was very, very funny back then.
One person found this helpful

EdmundReviewed in the United States on March 25, 2021
5.0 out of 5 stars
Before he got weird
Verified purchase
The absurd humor is no longer absurd today and therefore not funny for younger audiences; those unmoved by nostalgia for the material. I always loved these pre-Annie Hall classics including Bananas, Sleeper, Take the Money and Run, Love and Death, and Play to Again, Sam. After Annie Hall, Woody Allen started to get self-conscious and use his films to explore his personal disorders.

RBC from NYCReviewed in the United States on March 10, 2018
4.0 out of 5 stars
Its so stupid, its funny
Verified purchase
If you get Woody Allen's sense of humor, this movie is great. If not, then you'll find it bad.
For me, it was mostly funny but it gets tired after a while. Its one of those movies that I probably won't see a 2nd time, but its worth seeing it once.
4 people found this helpful

MDOMReviewed in the United States on February 25, 2021
5.0 out of 5 stars
Woody's First Woody Allen Film.
Verified purchase
He made two other films before this. What's Up, Tiger Lily and Take the Money and run. But Bananas feels like Woody starting to figure out who he was and was going to become as a filmmaker.

Kc MorrowReviewed in the United States on May 18, 2020
1.0 out of 5 stars
Exhausting
Verified purchase
Check out Radio Days if you want to get your feet wet with Allen. I was tired of this movie ten minutes in. I see others saying that this film is made better by an understanding of his humor, unfortunately it seems I do not in this case. Steer clear unless you're already a fan of his work.
One person found this helpful

Drew JarrodReviewed in the United States on June 2, 2014
2.0 out of 5 stars
Not very funny.
Verified purchase
He has a few good jokes and some talent, but as a whole, not very funny. It's old time comedy from the 1950's. A lot of Frank Sinatra stuff. Other people might think it's okay and comedy is very subjective, but as for talent, Fred Travalena is no Taylor Mason for making you laugh so hard your gut hurts! Tim Hawkins is better, Bill Cosby is better, Thor Ramsey is better, Michael Johnson is better. The 12 days of Christmas joke is way too long and only half of his imitations sound anything like the real person. Jim Carrey is better. Fred Travalena is a clean comedian though. No cussing.

PearCloudReviewed in the United States on May 18, 2019
5.0 out of 5 stars
Don't watch if you're not a Woody Allen fan
Verified purchase
It's a great fun movie for those who get Woody Allen.
3 people found this helpful
See all reviews
Back to top
Get to Know Us
Make Money with Us
Amazon Payment Products
Let Us Help You
EnglishChoose a language for shopping. United StatesChoose a country/region for shopping.
© 1996-2021, Amazon.com, Inc. or its affiliates