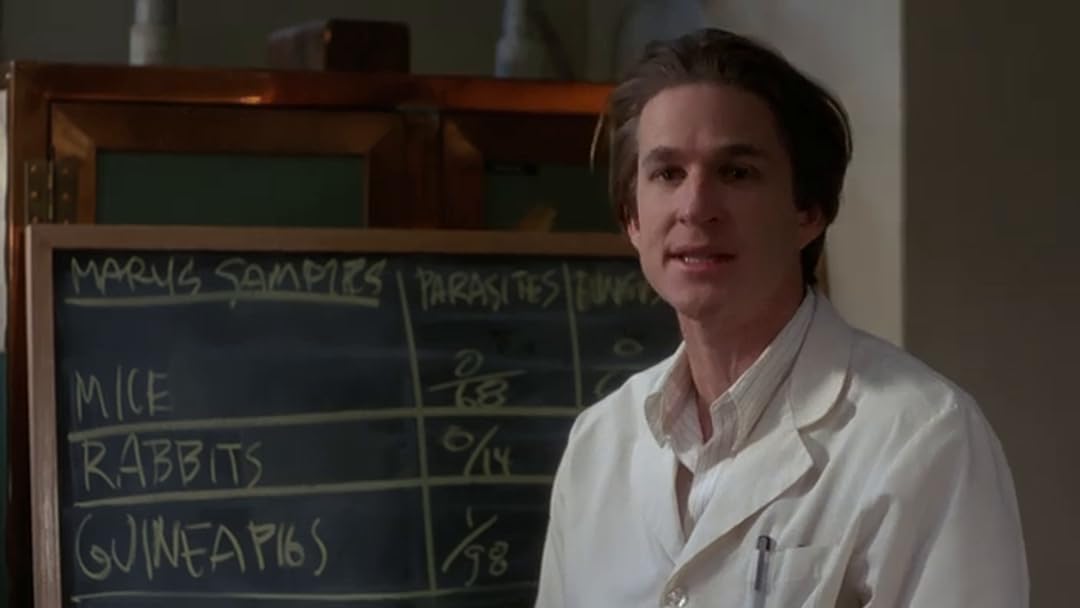 And the Band Played On

Rod SeversonReviewed in the United States on February 17, 2019
5.0 out of 5 stars
This hits me on a personal level...
Verified purchase
This is a fantastic and most important movie, it's perfect in every way...Mathew Modine at his best
and everyone else...
I lived in the Bay area when this pandemic hit its zenith, my symptoms started in '84. I will
always have survivor's guilt, and I will embrace and enjoy life to the fullest, and
tell people to make sure and watch this movie, especially those that think Reagan
was a great president...

Dr R P IReviewed in the United States on April 8, 2018
5.0 out of 5 stars
A wonderfully Rendered Production of a Seemingly Forgotten Moment in Our Nation's History
Verified purchase
This is one of HBO's finest efforts. I included Deadwood and The Wire in this grouping. I remember following this disease when little was known abut it and it seemed to have a 100% mortality rate and we didn't know how it was transmitted putting frustrating pressure on the Hospital's Infection Control Committee. The government's response was pathetic for the longest time. I personally know one of the physicians portrayed in this movie.
The production is filled with quality actors and the performances are first rate. The sound track is haunting and perfect. The Elton John's piece as background for the pictures of famous and not so well known individuals who lost their lives to this disease as a combined compilation is just heart rending. This is so worth while for those born after medical science solved much of the puzzle. Now with proper medical care for those who can afford it being HIV positive is somewhat like living Diabetes.
23 people found this helpful

KatReviewed in the United States on October 1, 2020
5.0 out of 5 stars
This should be mandatory viewing! Heartbreaking ... anger inducing.
Verified purchase
True story and good overview of these events. Great actors. The ensemble is really remarkable with no one specifically sticking out as it was about the AIDS crisis not the actors. Heartbreaking. If you lived through the Reagan presidency and were aware of the non-response of health agencies, this film will make you angry and bring memories back. Most of my generation either lost people to AIDS or we were scared to death about STDs as we came of age. The awareness certainly impacted how I viewed sexuality and health precautions/ behaviors.
If this does not evoke any feelings in you, get checked for a heartbeat! ... I also recommend the book. Yes, we could have stopped this! And as usual the Christian conservatives ruined public health policies with their religious bigotry. 40 years later and little seems to have changed re health policies and the faith of certain administrations. Watch this film and learn about the barriers researchers, Providers, patients, and advocates face.
8 people found this helpful

MichaelReviewed in the United States on January 27, 2019
5.0 out of 5 stars
HBO's finest hour. The political truth about the AIDS epidemic.
Verified purchase
This film is about the research that was done early in the fight against HIV (AIDS)
Yes, the film is dated, but it is a wonderful history about how hard it was to make
the government listen and act to give money for research.
It is a Gay Disease.......It has nothing to do with the public at large. Ronald Reagan
25,000 people had to die before Reagan mentioned HIV
18 people found this helpful

NorzemenReviewed in the United States on April 27, 2020
5.0 out of 5 stars
It clearly affected me
Verified purchase
I was drawn here looking for answers to our current pandemic covid-19. I learned that AIDS was a part of its genome and was interested in learning what I could. I researched Randy Shilts and was fascinated with his dedication to understanding this disease. The movie was fascinating. I knew what I was getting into by watching this movie, but I didn't know that it would hit me personally. If you are looking for answers to whats going on now this movie may or may not help, but it will remind you whats really important.
9 people found this helpful

ColleenReviewed in the United States on March 18, 2020
5.0 out of 5 stars
An important & infuriating movie.
Verified purchase
I've watched this movie many times since it came out and it still ticks me off and brings me to tears. The politicians, ie: the Reagan administration, who ignored it for so long should be ashamed of themselves!

It is an extremely well acted and informative movie, that everyone should watch about the beginning of AIDS, and the doctors who researched and fought for people to listen. Those doctors are heroes!

Bottom line, this movie is an indictment on the for-profit health industry and the politicians who did nothing until it was too late.
7 people found this helpful

DA MystReviewed in the United States on May 26, 2017
5.0 out of 5 stars
An emotionally powerful movie
Verified purchase
What can you say about this movie that many haven't said? It's outstanding and must see.

I remember when this premiered on HBO and how the talk of so many big named stars might hurt their career portraying gay men, but they did it anyway because of what the movie was about. And they did so masterfully.

Those that weren't around when this happened won't understand what it was like. No one knew squat about how it was transmitted or plenty else. This shows why and plenty should be ashamed of their role in it. I gave birth in the mid '80's and you don't want to know the all out panic from my family when they heard I was given blood. At the time that was frightening because of what it could mean.

It's a powerful movie, one which can not only anger you, but end up with you sobbing. The very end, set to Elton John's Last Song always leaves me in tears as it shows the human cost of politics and prejudice.

People have mentioned it's dated, but it's not that dated as this was done not long after so many of the events and is a true portrayal of what we now know is true. And it's horrifying.

This is the kind of movie those who it's age appropriate for should see it. This hasn't gone away. People are still getting AIDS and it's still a major issues. This gives you the closest history of how the epidemic started.
7 people found this helpful

Emily07Reviewed in the United States on April 20, 2016
5.0 out of 5 stars
An important subject with superb acting
Verified purchase
I was living in San Francisco when everything that was portrayed in this movie happened. I knew a little of it, but this movie showed I really had no idea what was happening behind the scenes. My brother was a drug user and died from AIDS, from sharing needles, so I have a personal interest in what happened during that time. The selling of tainted blood by the Red Cross and other organizations, even though they knew some of the blood was tainted, was a huge issue in the city and across the country. People going in for operations, would schedule their operations a ways out so that they had time to give their own blood, and have it stored for the operation at the hospital. There was so much distrust for the government, that lagged in even recognizing that there was a health crisis, and there was a distrust of organizations like the Red Cross. There was fear of the unknown. It was a very scary time for a lot of people.

I would highly recommend this movie. The acting was superb, and by the list of name stars that wanted to be a part of this movie, I think many people thought it was an important movie and one that needed to be told. It was emotional, because it was an emotional time, but the movie tried to present the facts in an unbiased way. My heart goes out to all the people who have died from AIDS, or AIDS related illnesses--over 25 million worldwide--and to the 36+million people who are now HIV positive. It is still a scary time for so many people.
11 people found this helpful
See all reviews
Back to top
Get to Know Us
Make Money with Us
Amazon Payment Products
Let Us Help You
EnglishChoose a language for shopping. United StatesChoose a country/region for shopping.
© 1996-2022, Amazon.com, Inc. or its affiliates