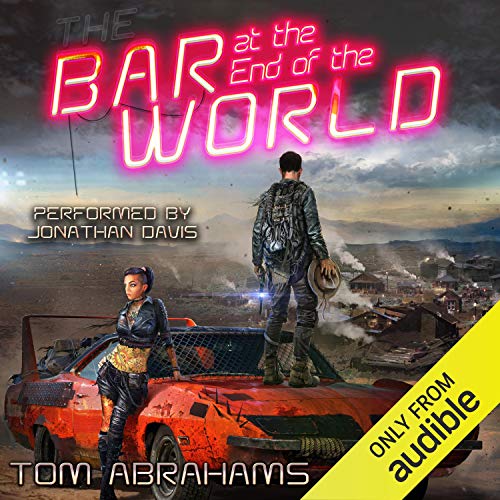 The Bar at the End of the World: The Watchers, Book 1

A starving city. A renegade bootlegger. A battle for the future of mankind.

Zeke is a bad guy. He didn’t choose to be. It’s just who he is. It’s who he has to be to survive in a post-apocalyptic world where trust is as scarce as water.

He's got nobody. No family. No friends. And he left behind the woman he loved for her own good.

But it's time to change. After a brush with death far out in the wasteland, he decides he's done risking his life to help his greedy bosses control who gets to drink water and when.

Now, he's stranded in a bar in the middle of nowhere, surrounded by the perfect kind of ruffians who can help him go back and make things right. Armed with renewed purpose and a one-of-a-kind muscle car, Zeke hunts for redemption, seeks retribution and, maybe, just maybe, he can get his girl back while he’s at it.

Take a ride across the wasteland in Tom Abrahams' newest post-apocalyptic, dystopian series, but with a fantasy twist. It will leave you wondering just what it means to be human.

It's perfect for fans of A.G. Riddle, Hugh Howey, and Stephen King's The Dark Tower.

Your audiobook is waiting!
Learn more about membership
List Price: $19.95
You Save: $7.96 (40%)
By completing your purchase, you agree to Audible’s Conditions Of Use
Sold and delivered by Audible, an Amazon company
Share

Brian
VINE VOICE
5.0 out of 5 stars A Completely Unique Post-Apocalyptic Tale
Reviewed in the United States 🇺🇸 on March 30, 2020
Verified Purchase
A fair warning. I’m going to try my hardest to not spoil this book but I fear that will be impossible. Abrahams wrote a story that has something in the middle of it that really defines the book. And it’s really hard to write a review without talking about that point. I don’t even want to say what the story reminded me of because saying that sort of gives it away.

The Bar At The End of the World will be both familiar and different for those of you who are used to Abrahams’ other stories. Sure, it’s a post-apocalyptic world. But it’s completely different than his other stories. The main issue in this apocalypse is water… or the lack of it. There are two rival factions who control, distribute, and bootleg water to the people left. That is where most of the similarities go out the window (though I will say that once we meet Uriel she did remind me a bit of a darker version of another character from another story that Abrahams wrote).

So, here’s where I would talk about the part of the story that really shocked me, but I can’t without spoiling it. Let me say that it had one of those Fight Club-like reveals to it. Once you know that (spoiler alert for Fight Club) the narrator and Tyler Durden are the same person and you re-watch Fight Club it’s a completely different movie). Once I found out the big reveal that Abrahams wrote into The Bar At The End of the World I was like, well I probably should have seen it coming but I didn’t.

The story itself is one about redemption, love, loss, and a bunch of other issues that make us human. Just know if you liked Abrahams’ other books, you’ll enjoy this one. But if you’re looking for a post-apocalyptic tale that’s unlike anything I’ve ever read (and I’ve read a lot of PA books) then this one will really be for you.

Overall, I thought that Abrahams wrote a fantastic book that really provided me with tons of entertainment but also a fair amount of shock and awe. One that I won’t forget for some time. One that I can’t wait to see what else happens in this world.
Read more
10 people found this helpful
Helpful
Report abuse

review
3.0 out of 5 stars a wild story
Reviewed in the United States 🇺🇸 on August 7, 2022
Verified Purchase
It is a wild story and it carries the reader along. The characters run the gamut from good to evil. The book is intensely violent even including torture scenes, So if you don’t want your poor heart to be torn up a bit give it a miss
Read more
Helpful
Report abuse

BigOrangeDaveTop Contributor: Fantasy Books
3.0 out of 5 stars One and done
Reviewed in the United States 🇺🇸 on July 25, 2022
Verified Purchase
Interesting world building. Twist was somewhat obvious but still managed to keep the story moving along. Not sure that I’ll bother with anything else in the series though.
Read more
Helpful
Report abuse

Gil T
4.0 out of 5 stars How did he get away from them?
Reviewed in the United States 🇺🇸 on July 21, 2020
Verified Purchase
Zeke is a runner, not drugs, not guns, but water. In our near future, water and food are scarce. The general population waits in lines on different days for different things. The people now in control basically brought down the old system of government and live in their high towers. Zeke is running from the rest of the Tick gang. The ticks try to suck a little life via water from the normal way of things. But he double crossed them and now is on the run. He left a note for his girlfriend and ran. He drives out into the wastelands and now the wastelanders are on him like the hounds of hell. He is shot up but barely makes it to a bar at the side of road.

When he wakes up, he seems like he is okay. Nobody will give him a straight answer and Pedro the barkeep is the worst of all. Why is he safe? Who are these other people (including Pedro)? And why do they want to help him save his girlfriend?
Read more
Helpful
Report abuse

Rexford
3.0 out of 5 stars Novel concept with some good sections, but overall just okay
Reviewed in the United States 🇺🇸 on November 12, 2021
Verified Purchase
Generally a good listen but the whole basis of the story is thin and contrived. The characters are not well-drawn, engaging, or deep (but some are quirty). By the middle of the third book in this trilogy the characters had become annoying and the plot was unraveling. I finally abandoned the series at that point and have had no compunction to return to it.
Read more
Helpful
Report abuse

Mike Keller
5.0 out of 5 stars Ezekiel Watson was a dead man. And he fights on, to restore the balance.
Reviewed in the United States 🇺🇸 on April 15, 2020
Verified Purchase
Completely intriguing, every action producing a response, every response leading to a goal. If only he knew what the goal was. He still had his impressive Plymouth Superbird, and now he had this oversized six gun with a nasty kick. And he could die. Again. End up back in the Bar At The End of The World. Still clueless. Still alive, sort of, to find his redemption.

Whimsical characters and a storyline premised on the Balance brought humor to the dire consequences of actions performed and perceived. I enjoyed the confusion and direction of the story. Altogether brilliant writing. This book kept me up a couple nights, and I loved it! I just preordered the next in this series, and picked up another work by this amazing author. I knew the author of the Travellers series would have more brilliant work, and I was not disappointed!
Read more
2 people found this helpful
Helpful
Report abuse

VickiO
4.0 out of 5 stars Good read
Reviewed in the United States 🇺🇸 on May 24, 2021
Verified Purchase
I really enjoyed this book. It was unlike any other book I have read, although I have read Tom Abrahams books before. I didn't guess the hook. What a surprise. I will say no more about that for fear of spoilers. I highly recommend this book. Good summer reading.
Now its on to the next "Bar" story.
Read more
Helpful
Report abuse

Mr Patton
4.0 out of 5 stars Not My Normal Choice of Reading
Reviewed in the United States 🇺🇸 on July 10, 2021
Verified Purchase
I didn't read the Synopsis for this novel, I saw it was written by Tom Abrahams and the Title had "End of the World" so I bought it. Not my normal type of reading but I read it.
Read more
Helpful
Report abuse
See all reviews

Michael
4.0 out of 5 stars Great first installment, I recommend it!!
Reviewed in the United Kingdom 🇬🇧 on July 24, 2020
Verified Purchase
A starving city.
A renegade bootlegger.
A battle for the future of mankind.

An absolutely great first book in a series, I got Mad Max vibes from it but I don't mean it's like it; it's a completely unique post-apocalyptic story in it's own right and I highly recommend it.

I'm looking forward to the next book. 👌
Read more

4.0 out of 5 stars Great first installment, I recommend it!!
Reviewed in the United Kingdom 🇬🇧 on July 24, 2020
A starving city.
A renegade bootlegger.
A battle for the future of mankind.

An absolutely great first book in a series, I got Mad Max vibes from it but I don't mean it's like it; it's a completely unique post-apocalyptic story in it's own right and I highly recommend it.

I'm looking forward to the next book. 👌

doggsbottom
5.0 out of 5 stars Intriguing
Reviewed in the United Kingdom 🇬🇧 on October 4, 2020
Verified Purchase
This was a somewhat different take to what i was expecting, however, i was pleasantly surprised and found my self drawn in to the story and enjoyed it immensely, so much so that i bought the nextbook in the series
Read more
Report abuse

Richard
4.0 out of 5 stars No spoilers
Reviewed in Canada 🇨🇦 on December 2, 2021
Verified Purchase
I really love the story and the characters. So much so that I bought the following two books in the series.

A word of warning: Be prepared for a twist that will come out of the left field.
Read more
Report abuse

Kindle Customer
5.0 out of 5 stars Thrilling
Reviewed in Canada 🇨🇦 on April 24, 2021
Verified Purchase
Lots of action. I loved the storyline, and I'm looking forward to the next book.looking forward to more action packed thrills.
Read more
Report abuse
See all reviews