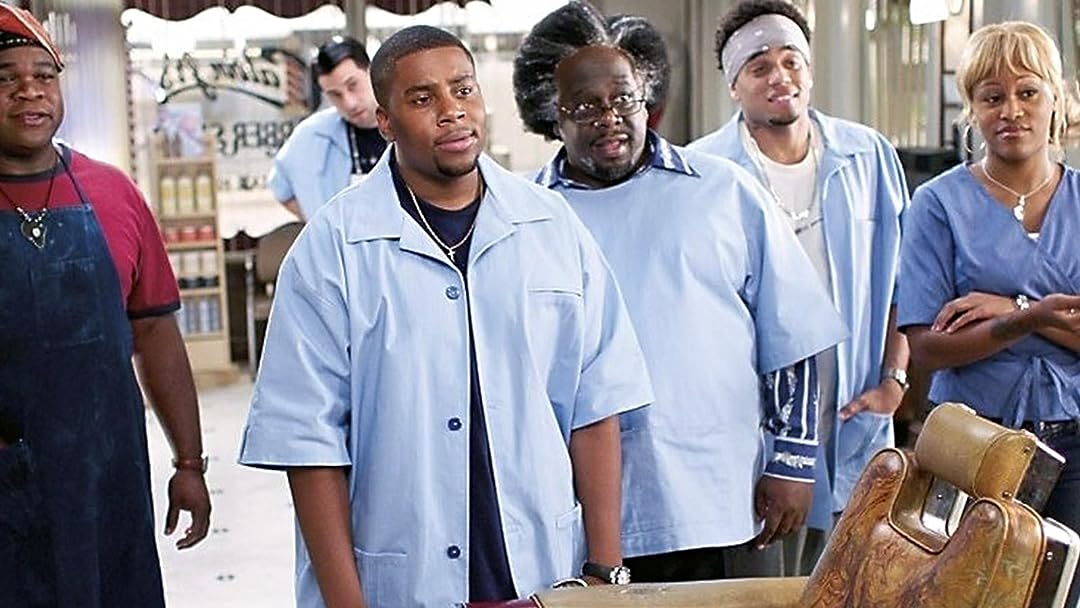 Barbershop 2: Back in Business

(1,099)
5.71 h 45 min2004X-RayPG-13
Time for another haircut -- the buzz is back in Barbershop 2. Calvin (Ice Cube), Eddie (Cedric the Entertainer), Terri (Eve), Jimmy (Sean Patrick Thomas), Issac (Troy Garity), Ricky (Michael Ealy), and Dinka (Leonard Earl Howze) are open for business again at Calvin's Barbershop, with Queen Latifah cutting up as Gina, a stylist at the beauty shop next door. Calvin is again struggling to keep his father's shop and traditions alive, this time against urban developers looking to replace "mom & pop" establishments with name-brand chains. The world changes, but some things never go out of style -- from current events and politics to relationships and love, you can still say anything you want at the barbershop.

joel wingReviewed in the United States on October 24, 2020
3.0 out of 5 stars
If you liked the first Barbershop there’s more to like here
Verified purchase
After creating the Friday’s franchise about him hanging out with his friends as a young man in Los Angeles, Ice Cube decided to start another comedy series about being a businessman in Chicago with Barbershop. This was the second installment. This time Cube as Calvin is faced with a new challenge as a haircut chain is opening across the street from his shop.

The large ensemble cast returned with Cedric the Entertainer as Eddie the old school barber dispensing knowledge and jokes, Troy Garity as Isaac a white barber who finally has credibility and a slew of customers, Eve as Terri who still an angry woman, Sean Patrick Thomas is Jimmy who has moved up from the barbershop to work for an alderman, Leonard Earl Howze as Dinka is still sweeping the floor, and Michael Ealy is Ricky. Added to that is Queen Latifah as Gina who runs a beauty salon and Kenan Thompson as Kenard the new barber for Calvin. As usual they are the real stars of the movie and all their stories and jokes carries things far more than Calvin’s dilemma. For instance, Calvin holds a BBQ and Eddie gets into with a little girl. She says she’s going to tell her auntie on him and he responds “Go to the crackhouse and tell your auntie.” Another time a councilman comes to Calvin’s to try to help it out and Kenard lops off a hunk of his hair. The characters really create some great laughs.

The movie centers on whether Calvin’s shop is a pillar of the community or not to see whether it survives. Black barbershops aren’t just where people get a cut it’s where they hang out gossip etc. If Calvin has that then he’ll survive this challenge.

If you liked the first Barbershop there’s more to like here.

stevey wundarReviewed in the United States on July 21, 2006
4.0 out of 5 stars
Mo' Good Times
Verified purchase
You really have to see the first Barbershop (2002) to appreciate this sequel, but overall I found this sequel to be the better of the two movies.

If you've gone this long without seeing either film, I'm guessing you've at least heard rumors about the movie's premise.

Barbershop 1 takes a look inside a long staple of the African-American community -- the barbershop (and really black hair salons also) -- where any and everyone is made to feel at home, any and everyone has an opinion and all are welcomed into discussions of politics, race, sex, class and life without the fear of being condemned for "their personal opinion."

Using a southside Chicago barbershop that's been passed down from father to son and continues to be a meeting place for the community's four corners, calamity ensues as the lives of one entangles another before ALL come to the rescue to save the day.

This premise is repeated, albeit, more real and less over-the-top in Barbershop 2 than in the first.

The characters became believable, real people with all their own individual quirks instead of being the loud mouth caricatures they appeared to be in the first version.

This movie also does a deceptively clever job of using comic relief to pose true-to-life social issue discussions on history-rooted topics like...

1)How much should we as a society change vs. How much we should retain and stay the same?

2)In the duel of big business & big dollars vs. morality & spirit, which is "really" best for the community at large?

3)As it pertains to the African-American cultural identity, how far should blacks go to further "assimilate" into the mainstream vs. how much of its past identity should it cling to for the sake of cultural pride and integrity?

I'm sure the overwhelming majority of viewers probably just watched this movie for jokes.

And while it has it's funny moments, pay special attention to the movie's more subtle details (like the opening scenes' use of hair as a motif) and retrospective messages and you'll see there's more to it than a Cedric the Entertainer punchline.

Overall, this movie is what I call "real" entertainment.

tammy thomasReviewed in the United States on July 18, 2016
5.0 out of 5 stars
Funny movie
Verified purchase
Great movie. This is a sequel to the original Barbershop with most of the same cast returning. Calvin the owner of the Barbershop is once again faced with trouble with his barbershop. There is never a dull moment in this comedy. Everyday antics and problems get resolved one way or another. Ice cube is a great actor and you are sure to love this movie. Me and my daughter loved it and it was nice to see how some of the characters try to keep traditions alive. The movie of course takes place in the setting of a barbershop.
2 people found this helpful

rdjenkinsReviewed in the United States on November 7, 2020
3.0 out of 5 stars
fun sequel
Verified purchase
Maybe not as complex as the first, but stuff to think about. Queen L. is always good, too -- even in a brief role.

TonyReviewed in the United States on December 8, 2019
4.0 out of 5 stars
Fun
Verified purchase
Not as good as the first
One person found this helpful

greg whiteReviewed in the United States on January 9, 2020
5.0 out of 5 stars
Excellent
Verified purchase
Excellent
One person found this helpful

Amazon CustomerReviewed in the United States on January 19, 2022
5.0 out of 5 stars
Perfect Description
Verified purchase
Perfect Description
See all reviews
Back to top
Get to Know Us
Make Money with Us
Amazon Payment Products
Let Us Help You
EnglishChoose a language for shopping. United StatesChoose a country/region for shopping.
© 1996-2022, Amazon.com, Inc. or its affiliates