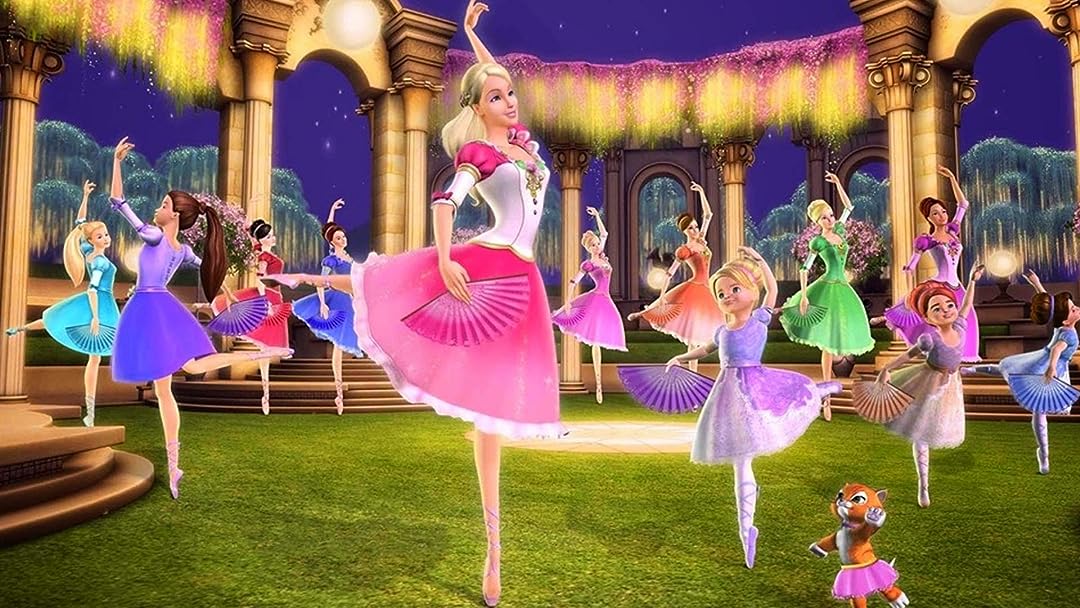 Barbie in the 12 Dancing Princesses

Kats PaletteReviewed in the United States on November 16, 2020
2.0 out of 5 stars
Great Movie, unimpressed with the condition
Verified purchase
I was glad to find this movie at a reasonable price, but I'm very disappointed with how it arrived. It was still in its typical DVD shrink wrap, but I could see the case was clearly damaged, and you could hear the disc rattling around since it had popped out of the holding mechanism. When a product says "new," I expect it to be in good condition, but the disc was scratched in multiple spots thanks to the broken case.

The good part is that it read just fine in my laptop's disc drive, and when I went to rip it (for personal use while traveling), my software handled it without any glitches or distortion. I feel this last part is key to mention because I've absolutely had this problem when trying to rip other Barbie movies, usually with a really eye-numbing red filter and messed up audio. I understand why they do it, piracy is a real concern in the digital age, but I'm just an average user who wants to have a personal backup, in case my disc is too damaged to work someday and it goes out of print forever. Given the disc doesn't have anything but the logo and legal information on it (it's your generic mirror-like disc), I'm not sure if it's actually a modern disc or not, which is odd given the box art has the revamped illustration style that so many of the rereleases have. The disc says it's copyrighted 2009 though, which is odd. This movie was released in 2006, so it's a reprint, but maybe not a modern encrypted one. So yeah, not real happy with how it arrived, but it worked and did what I need it to.

As for the movie itself, if you've got a young child that has an interest in dance, consider picking this up. I was ballet obsessive as a little girl, and my original copy (before I gave it away) got a lot of use on car rides. The dancing sequences are amazing, the story is empowering, and the characters are super lovable. If nothing else, you'll appreciate the sassy parrot.

C.J.CReviewed in the United States on March 7, 2015
5.0 out of 5 stars
Buy it! You'll love it yourself!
Verified purchase
I suspect many mothers don't buy these for their daughters because of the sexy, empty headed image Barbie dolls used to have. A shame, because the movies are the exact opposite of that! I love the Barbie movies for teaching character and values to girls. The animation uses real actors for models, with excellent expression both visually and audibly. Matel writers elaborate on several old fairy tales, like this one, and turn them into entertainment that adults along with the children can enjoy. In this case, the trusted governess, a relative, poisons their father with plans to to inherit his wealth. The young ladies, with some help from a young man, discover her plot and team up to free their father by showing courage and using their minds to cleverly work out the details. Barbie movies always have music, dancing, much of it classical, and beautiful sets and are the best kind of entertainment. Even the littlest two year old girls are spell bound by the beautiful colors, sparkles, attention to detail in the scenes, animation and intricate plots.The heroines are delightful models for girls to bring out the best in them. In this one, the 12 sisters each play a role in rescuing their father from near death, and an older sister finds true love in the hero who bravely assists them, but they are all the heroines, even the littlest! My three grand daughters, the youngest two years old, love to dance when they watch and afterwards, when the music continues to play at the end.
I should also mention that their big brother, age 7, told me he enjoys them. There are always heroes in them. He said he would just as soon watch a Barbie movie as the greatly entertaining geological dinosaur movie I bought for him!
20 people found this helpful

Mountain WomanReviewed in the United States on October 10, 2021
5.0 out of 5 stars
A lot of time has passed but I still love it!
Verified purchase
My daughter is now in college and we still will watch it together. We do Barbie marathons. Not even joking. We watched it when she was tiny, and we’re watching it now that she’s taller than I am. The music and choreography for the animation is top notch.

My new boss? It turns out she watches it with her adult daughters too! I am not even kidding when I say this product is timeless.

JudyReviewed in the United States on November 11, 2019
5.0 out of 5 stars
One of the Good Barbie Movies
Verified purchase
I remember reading a book version of this movie as a child at my chiropractor's office and enjoyed the tale. I had heard it was good and had brief flashes of memory from when I was young where I might have seen the movie, so I put this on the list of Barbie movies to rewatch. Had a great time, enjoyed how every sister had her own distinct personality even if they were simplified to make things easier. Overall a good time, even if it is kinda cheesey.
2 people found this helpful

MSReviewed in the United States on February 20, 2012
5.0 out of 5 stars
Exceeded my expectations
Verified purchase
I have never been a huge fan of Barbie dolls, so I never gave much thought to checking out the Barbie movies. In my view, there were Disney/Pixar movies, and then there were a whole slew of other inferior, imitation cartoons that were only worthy of being on the dollar rack at the grocery store. Anyway, I ordered this movie only because it was on sale and I needed one more item in my cart in order to get free shipping, and it had 4-5 stars, so I figured it would be decent and entertain my almost-4-year-old daughter.

First I was surprised at the quality computer animation. Maybe not quite Pixar level, but still pretty good! Second I guess I was expecting a 30-minute cartoon, but it is a full-length feature. Third, as others have mentioned, the music is very nice, mostly classical, and pleasant to listen to. Fourth, I thought the themes in the movie were nice ("Big or small, there is a difference only you can make", also the girls respect their father, they get along with each other (12 sisters sharing a room!), and they help when needed even when it requires personal sacrifice (both Derek, who gives up his horse to buy back something that was wrongfully taken, and the princesses, who give up their dance pavilion to rescue their father). My one quibble regarding lessons taught is that while the movie rightly celebrates uniqueness and being special in your own way, the princesses were a little unruly at the beginning, and although in the movie the quest to make them "proper princesses" is a disaster, there isn't really anything wrong with having good manners and learning etiquette.)

But the biggest praise I can give is that my daughter LOVES this movie. She watches it or asks to watch it every day. And after she watches it, she asks if she can watch it again. Often during the dance parts, she stands up and twirls with the princesses, or tries to copy their dancing. So, here I am back on amazon, to buy another Barbie movie for her for her birthday, before she wears this one out.
8 people found this helpful

CHOEKReviewed in the United States on December 9, 2016
5.0 out of 5 stars
Great Movie. Highly recommend.
Verified purchase
I would never want to go see the nutcracker, but I actually really like this movie, the songs and each of the sisters who are characters in the movie. Would highly recommend.

Some of the newer barbie movies - I just literally can not handle. Now days they try to throw all the fairies, glitter, super powers, mermaids, dancing, singing and spys together and what they spit out is unbearable. I am not sure I've liked anything since Barbie and the Diamond Castle which is one of my favorites. As a parent if you're going to be subjected to these same movies over and over, you at least want to enjoy it too.
4 people found this helpful

SnufkinReviewed in the United States on October 15, 2020
5.0 out of 5 stars
Barbie dances
Verified purchase
This is a great movie for kids. My daughter has loved it for years - from about 5 to 16. Its even endurable for adults the first few dozen times. After that, it becomes a test of how much you love that kid. Probably the best of the Barbie movies, but the Dreamhouse series is still the best.
One person found this helpful

Turtle502Reviewed in the United States on October 18, 2008
5.0 out of 5 stars
A Great Story and a Visual Treat
Verified purchase
I got this for my 7 year old daughter, who has most of the other Barbie animated movies. I watched it with her, and I enjoyed it just as much as she did. It has an excellent story, an excellent message, and wonderful visuals.

Although this film is now several years old, the animation is probably one of the best in the computer-animated Barbie movie series. The textures are finely detailed -- from the sets to the wardrobes to the faces. Movements and expressions are exceptionally fluid and extremely lifelike -- at times, you'll forget you're watching something computer animated. The dresses and skirts move in a natural fashion as the girls dance -- there is nothing stiff about this animation at all. It is a pleasure to watch.

The music is also very enjoyable, especially through a sound system. The classical music and original themes really add to the overall atmosphere of the production. The music is probably my favorite part of this film.

The characters are enjoyable -- you have your typical villain and sidekick, some comic animals, a prince, and the princesses. Voice acting is superb and believable. The story is written at a child's level, with enough sophistication for adults to enjoy.
6 people found this helpful
See all reviews
Back to top
Get to Know Us
Make Money with Us
Amazon Payment Products
Let Us Help You
EnglishChoose a language for shopping. United StatesChoose a country/region for shopping.
© 1996-2021, Amazon.com, Inc. or its affiliates