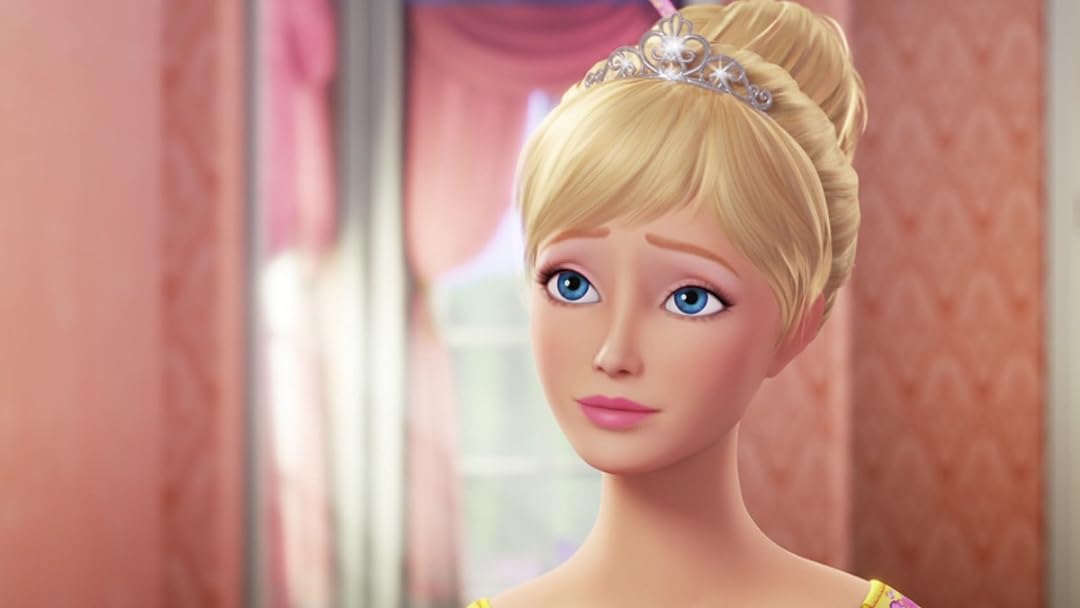 Barbie And The Secret Door

SixInTheSunReviewed in the United States on August 23, 2019
4.0 out of 5 stars
Really like this movie with one exception
Verified purchase
My daughter loves this movie,and we couldn't find our copy. We rented it on Amazon Prime Video. Many great themes throughout. The one piece we don't like is the "bad" girl. She is incredibly greedy, snotty, and mean. We realize it is an opportunity for a life lesson for our kiddos, so we make it that. Her use of the word "mine" and song around "I want it all. I want it now. Mine, mine, mine." makes that message sound like a cheery tune. So again, we teach to it, but I the song could have been presented a bit differently. Still, we will watch this again, because Princess Alexa is a smart, brave character who learns how to be brave with the challenges surrounding her.
4 people found this helpful

I had avoided Barbie thinking there would be a "mean girl" element or that the Ken/prince character would always have to save Barbie. Nothing of the kind. At least in this installment of the zillion movies available, no prince/Ken like character even appears until the last five minutes and only after Barbie has made great friends, and she and her girls have saved themselves. Very obviously computer generated animation, but not bad. Music isn't terribly annoying. All in all, a pleasant surprise.

MarzipanReviewed in the United States on April 13, 2019
3.0 out of 5 stars
mostly cute except the villain ruins it
Verified purchase
Extremely annoying brat-villian with a whinny voice. throwing a tantrum ... "BUT I WANT IT NOW!! "
etc... I'm sure my kids are not the only ones that picked up on her character and then proceeded to mimic in public thinking they were funny.... Not the right modeling of behavior. Kids pick up on things like that.
Annoying song too.
This is bottom of my barbie video list. Won't watch it again.

LCBReviewed in the United States on November 12, 2015
5.0 out of 5 stars
Great movie - childhood innocence without the romantic themes present in recent animated movies
Verified purchase
I bought this for my 8 year old granddaughter and she loved it. I liked the innocence of the message. The magic kingdom is populated with fairies, mermaids, unicorns, and various creatures. When Aladdin is mentioned, the mermaid asks what is a magic carpet and what is a boy? There isn't the romantic push that there is in Disney movies. The prince appears briefly at the ball in the end and when Barbie's mother suggests she dance with him, instead Barbie dances a hip hop dance routine with her friends. The Grandmother ends up dancing with the prince. I really liked the minor role of the grandmother. She is the one who initially gives the magic book to Barbie (a book lover.) The "villain" in the movie is a spoiled greedy indulged little girl. I considered this a good thing for the movie. Some recent animated villains are too extreme in my opinion. My granddaughter didn't in the least consider her a role model and behave badly after watching the movie, as I have seen in other reviews. My granddaughter considers this one of her favorite movies now and had watched it several times.
4 people found this helpful

JJQReviewed in the United States on January 18, 2015
5.0 out of 5 stars
Princess, Mermaids, Fairies, Unicorns - What More Could A Four Year Old Girl Want?
Verified purchase
This was our introduction to the Barbie movies, which honestly I had always passed over assuming they would be low quality animation and vapid storylines. I was pleasantly surprised by how well made this movie is. The animation has bright colors and more realistic movements than previous Barbie efforts. The heroine has a beautiful face, but she is also humble, smart, loves to read, wants to help, and discovers her courage, making her a positive role model. It made me chuckle how tailor-made this film is crafted for young girls. They threw in everything: princesses, fairies, mermaids, unicorns, and a candy colored world. It was like a Lisa Frank illustration come to life.

I liked that the villain of the story was not too scary - which makes this great for younger audiences. Some of the other Barbie films have really evil villains who are plotting murder. This villain, Melusha, is a spoiled child who is mean and stealing magic. I was able to discuss Melusha's actions with my daughter and why she is naughty (not sharing, stealing, name-calling, mean attitude).

Finally, the songs in this film are great. It's really mostly two songs, sung multiple times with different lyrics. However, they're catchy pop and add to the film. We liked them so much we also purchased the soundtrack, so my daughter now enjoys dancing, singing and role playing the movie.
3 people found this helpful

Starlight RoseReviewed in the United States on March 25, 2015
5.0 out of 5 stars
This Movie's Got Magic!
Verified purchase
Barbie's done it again!

First let me say how much I love the music, especially "I've Got Magic". I really like the magical feel this movie has when Alexa goes through the door and enters a whole new world. You can't help but love Nori and Romi (especially when Nori is voiced by my favorite voice actress, Ashleigh Ball!) and the comedy throughout the film. I could totally relate with Alexa. That's another thing this movie has - good character development. Sure Malucia is annoying at times, but what villian isn't? The acting is great, the visuals look smashing on Blu-ray, and as I mentioned before, the music will have you singing along. Overall, it is a must-see movie. And it's one of my personal favorites from the Barbie series.

LalaleiReviewed in the United States on November 13, 2014
5.0 out of 5 stars
Gorgeous, adorable, colorful, and tons of fun!
Verified purchase
This movie is a delight! Older Barbie movie fans will enjoy it for the whimsical fantasy, and newer Barbie movie fans will enjoy it for the good lesson and moments of friendship. I enjoy it for both! The story is about the shy Princess Alexa, who would rather stay at home and read than socialize. When she finds a magical door to the world of Zinnia, Alexa must rise to the challenge alongside Nori and Romy, a fairy and mermaid who had their magic taken from them by the wicked, spoiled Princess Malucia. Alexa learns to believe in herself as she works to defeat Malucia and save the entire land's magic.

The movie is GORGOUS! The world of Zinnia is one of the most engaging fantasy words I've seen recently. it incorporates many spirals in its design and is a candy-colored treat for the eyes! I must have taken 100 screencaps of just the magical world! If you're looking for a colorful adventure with catchy songs and a lot of heart and fun, watch this movie for sure! A highlight is Malucia's villain song, "I Want It All."
2 people found this helpful

CNReviewed in the United States on June 10, 2015
5.0 out of 5 stars
Adventure in finding one's self with Barbie
Verified purchase
Always been a fan of the Barbie series. It is very helpful to have both DVD and Blueray combo. Even the Digital copy is nice to have when you are on the go.

In this movie, Barbie plays a princess who doesn't really want the responsibility of being a princess. She would rather read books all day. One day she begins reading a book that magically leads her to a magic door. She walks through the door to face an adventure of finding one's true self and courage. Watch as Barbie learns her true strength is within and doesn't need someone to save her.
See all reviews
Back to top
Get to Know Us
Make Money with Us
Amazon Payment Products
Let Us Help You
EnglishChoose a language for shopping. United StatesChoose a country/region for shopping.
© 1996-2021, Amazon.com, Inc. or its affiliates