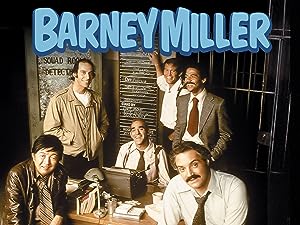 (759)
8.319757+
The captain of a city police station and his staff deal with the daily parade of criminals and characters that come to precinct headquarters.

IZZYReviewed in the United States on June 13, 2018
5.0 out of 5 stars
Funniest cop show EVER !!!!
Verified purchase
Barney Miller was one of my favorite sitcoms of the 70's along with Sanford and Son and Taxi. I used to watch this hilarious show with my mom and dad and we would laugh our heads off at his antics and jokes perpetrated by Barney (Hal Linden). Fish (Abe Vigoda RIP), Wojo (Max Gail), Chano (Gregory Sierra, late of Sanford and Son), Harris (Ron Glass RIP), and Yemana (Jack Soo RIP and my dad's personal favorite of the crew). This diverse crowd of Greenwich Village detectives never failed to tickle the funny bone, dealing with crooks and weirdos of all types, along with the yucky coffee usually made by Nick Yemana (Barney: "Maroon coffee? Nick: "it's the color spectrum-brown coffee and yellow water makes maroon!"). Shoplifters muggers flashers hookers and various and sundry kooks, such as a guy who thinks he's a werewolf (Season 3) are just a few of the situations they faced, all in a day's work. If you like belly laughs without al the smutty, politically-correct nonsense contained in most modern day so-called comedies, "Barney Miller" will push all the right buttons for you. A great cast (most of them no longer with us unfortunately :'-( with many fine and familiar actors in guest roles, created a Golden Globe winning sitcom the whole family can enjoy. LOVE IT (っ◔◡◔)っ ♥
9 people found this helpful

DanReviewed in the United States on January 10, 2020
5.0 out of 5 stars
Still Great
Verified purchase
A groundbreaking show almost as important as All In The Family, Maude or Rhoda in terms of bringing up sensitive issues previously unpopular for tv depiction. BM also continually pointed out cultural differences, as well as intolerances, of people working in close quarters under stressful, dangerous situations. Its topical matters may seem antuque to younger viewers, but this was heady in its initial era. The great news is that the comedy of human emotions isn't lost at all with time. This show should grab anyone's attention, and probably make them laugh and think almost a half century later (yes, it's been that long)!
4 people found this helpful

born too lateReviewed in the United States on November 3, 2017
5.0 out of 5 stars
It still makes me laugh
Verified purchase
Still makes me laugh. No special effects or glitzy sets. Nothing deep or meaningful, no anti hero ... just great one liners and a cast with precision timing to deliver them, plus an always entertain revolving door of guest roles. I swear I laughed more watching a few episodes tonight than I have, well I don’t think anything on tv today compares. I was just a teenager when it was on originally, and I was afraid I would find it cheesy and dated, that maybe I’d gotten too jaded to enjoy it; but while the set and costumes are vintage, the premise of the show is timeless. Nothing meaningful here, just nice, clean laughs. No potty humor, no foul language. And all these years later, it still entertains. It’s a shame I have to reach back 30 and 40 years to find tv that I can watch with every generation of my family and not worry. I’ll just be thankful these shows are available at all.
7 people found this helpful

Mitch TillisonReviewed in the United States on June 12, 2022
5.0 out of 5 stars
One of the best from the seventies
Verified purchase
If you look past the obvious inconsistencies (detectives answering trouble calls, etc) and concentrate on the excellent casting, writing, and performance, this is one of the greats and withstands the test of time. I was a teen when this aired. I liked it then and still do after almost 50 years.

M. HummelReviewed in the United States on March 1, 2004
5.0 out of 5 stars
Can't ask for more than this. One of the Best.
Verified purchase
Barney Miller received the Emmy for Best Comedy in its final season (it went off air in 1982); it was sort of a cumulative Emmy for a show that had never really become a hit (although it was often in the top 20). Starting as a mid-season replacement in January 1975 (hence the 13 episode first season), the show slowly built from a less subtle comedy with a heavy dose of domestic sitcom and some rather crudely drawn characters into a subtle, intelligent program with ongoing story arcs (Wojo's struggle to pass the Sergeant's exam, Barney's marital and promotion woes, Harris's rise and fall as an author) that were only completed at show's end.
Of course, most great shows have a great cast who truly seem to enjoy working together. Barney M is no exception. Hal Linden was great as the moral and logistical center of the show, a true father figure and solid straight man. Mas Gail as Wojo was sort of the naive conscience of the show, thinking nothing of bringing the Pentagon in to the 12th Precinct to face a battery of questions on Agent Orange. Ron Glass, as the supremely ambitious, tremendously literate Harris was a rare representation of an African-American male that didn't focus exclusively on his race (but didn't ignore it completely either, as witnessed by the Emmy-winning episode "The Harris Incident"). Jack Soo as the bizarrely deadpan Yemana, Ron Carey as the resentful/insecure/yet surprisingly resourceful Leavitt was a revelation as the show wore on. Steve Landesberg's Dietrich was a good counterpoint to some of the flashiness of Harris or emotionality of Wojo, with his drier than dry wit.
This may be a controversial observation, but I felt the show improved with the departure of Abe Vigoda's Detective Fish, whose emphasis on schtick took away from the show's more subtle comedy. I've read that Vigoda even requested that the show be renamed "Fish and Barney Miller." Can you imagine?
The one criticism I might have of the show is that the show was not as generous with its female characters as it came to be with its male characters. My wife loves Barney Miller, but often finds the show's tendencies toward "ladies of the night with hearts of gold" a little grating.
Still this show's portrayal of the dynamics of the workplace and how several diverse men work things out together with respect, care and openness while being constantly funny is a great accomplishment. Throw in that the show is sort of a record of key issues and trends of the seventies (mindless bureaucracy, bankrupt cities and their budget cuts, sperm banks, environmental issues, Native Americans, Viet Nam vets, oddball cults, etc., etc.), and this is a show that shouldn't be missed. It's a show that can make you laugh and once in a while make you cry. And it always made me think. Can't ask for more than this.
The first season was a good start. There are 170 episodes total. Can't wait for the next 157!

RichReviewed in the United States on August 28, 2006
5.0 out of 5 stars
Even Better than I Remember!
Verified purchase
This is a Great Sitcom!

The acting and the interaction of the original main characters is what sets this Sitcom apart from the rest. The men of the one-two encounter serious situations that they are able to handle with their own inimitable style. They dispense justice with common sense, judgement, warmth and more than a little bit of humor.

Yamana - The perpetual Gambler with a dry sense of humor.

Wojo - The over eager young detective that loves women and doesn't think too hard.

Harris - The dreamer that would rather be a novelist than a cop but needs a job to pay the bills until the big break comes along.

I think that they are all individually Great Actors but as a Squad they are incredible. Join the Fun!
9 people found this helpful

D. PawlReviewed in the United States on December 13, 2006
5.0 out of 5 stars
I would give this six stars, if we were allowed more....
Verified purchase
For anyone who isn't familiar with Barney Miller, I reccomend you purchase your very own copy of the first season of this brilliant show, and acquainte yourself with its wit, intelligence and authenticity. My only qualm is that this is the only season that has been released on DVD (they really need to transfer the rest of the seasons). What sets Barney Miller apart from other sit coms/dramas I have seen on television, is its distinctive and intelligent approach to humor. The characters are not only believeable and very down to earth, but really potentially loaded topics are handled in a very sensitive and insightful way. You walk away feeling not only entertained, but more intelligent. This is a timeless quality to the series that makes it just funny, now, as it was thirty years ago.

Episodes run the gamet of just about every scenario you can imagine (everything from prostitution to mental illness to drug addiction). The subject matter is handled sensitively and thoughtfully. Capt. Miller is more of a social worker, than a cop, and we see his character as a strong, yet compassionate, man. If you thought NYPD Blue gave you glimpse into the work of detective and police work in NYC, give Barney Miller a try. You will be glad you did.......
10 people found this helpful

David GirodReviewed in the United States on March 7, 2005
5.0 out of 5 stars
It's Great to re-visit the 12th Precinct Again!
Verified purchase
"Barney Miller" is one of the best written shows of all time. The characters all mesh, and their reactions to the various criminals that pass through the cell door are priceless. Though this first season is hampered with a bit of Barney's home life, and the awful scenes of Barney's wife played by the perpetually unfunny Barbara Barrie, it's still a great dvd set. Abe Vigoda's facial expressions and dry one-liners are a riot, and you will find yourself rewinding scenes to catch what you missed while laughing. Jack Soo is terrific. He gets some of the biggest laughs on the show with just simple lines or looks, not since Jack Benny has someone been able to do so much while doing so little. Another great thing about "Barney Miller" is that you really develop an emotional attachment to these characters, so when something happens to them, Wojo getting poisoned, or Chano having to deal with shooting two bank robbers, you genuinely care for them. Nothing was ever forced on this show, and if you aren't familiar with it, pick up this set, give it one or two shows until you really get familiar with the characters and you will find yourself going back and re-watching favorite episodes, or thinking about something that happens on a show and chuckling throughout the day. This is some of the best TV ever produced.
8 people found this helpful
See all reviews
Back to top
Get to Know Us
Make Money with Us
Amazon Payment Products
Let Us Help You
EnglishChoose a language for shopping. United StatesChoose a country/region for shopping.
© 1996-2022, Amazon.com, Inc. or its affiliates