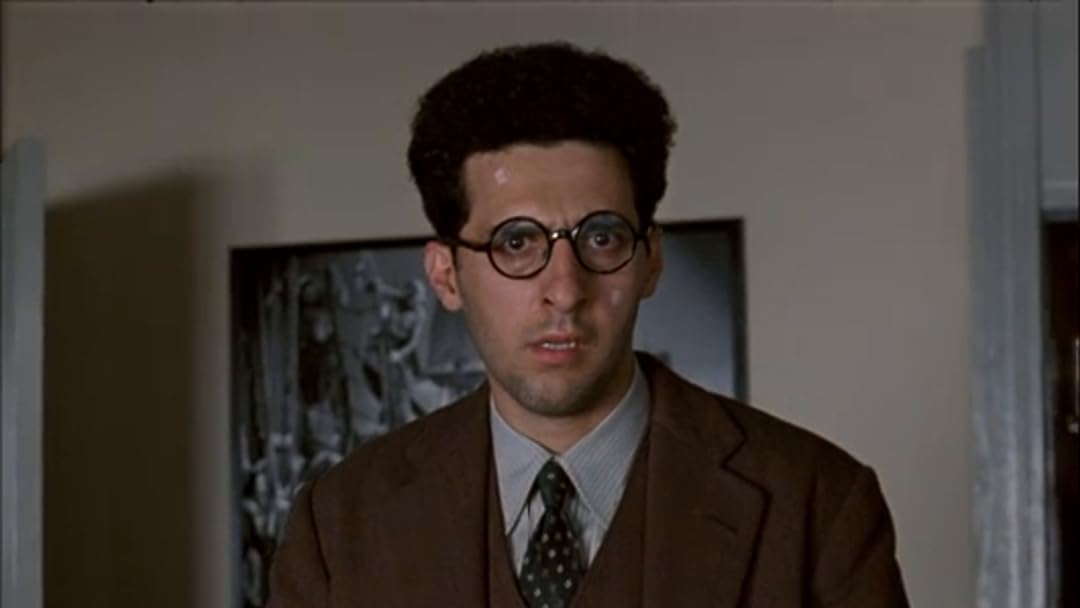 (936)
7.61 h 56 min1991X-RayR
New York intellectual Barton Fink comes to Hollywood in 1941 to write a screenplay, but he soon finds himself with a severe case of writer's block as a bizarre sequence of events distracts him from his task.

joel wingReviewed in the United States on November 1, 2020
3.0 out of 5 stars
It's esoteric and absurd from start to finish in one of the Cohen Bros quirkier releases
Verified purchase
John Turturro is Barton Fink a New York playwright who decides to try to make it in Hollywood. Fink champions the working man but can’t write when he moves to Los Angeles. This is another one of the quirky movies made by the Coen Brothers, but also a commentary about Hollywood.

Fink represents struggling writers in the movie business. For example he’s told to do a wrestling movie and he doesn’t even know how to write a script let alone something about wrestlers. He also has writers block as he’s taken out of his environment of New York City and enters Los Angles where everything is foreign to him. He also meets people like W.P. Mayhew (John Mahonye) who is a famous novelist but can’t get any work in LA. Are these people warnings to Fink or foreshadowing of what’s going to happen to him?

Overall, Barton Fink is definitely one of the weirder Cohen brothers productions. It’s esoteric and absurd from start to finish.
C

rudolph g behrmannReviewed in the United States on October 18, 2020
5.0 out of 5 stars
Darkly funny, and unexpectedly sinister.
Verified purchase
Classic Coen bros film. I first saw this in the theatre in the 90s. It was marketed as a dark comedy, but this film is so much more than that. An excellent film. John Tuturro is phenomenal as the title character, John Goodman is unexpectedly good as the annoying traveling salesman with a surprising darkness within him. Fink's twisted relationship with Hollywood as a feature screenwriter is a wonderful character examination.
3 people found this helpful

Simeon 'Sam' HoveyReviewed in the United States on May 17, 2020
1.0 out of 5 stars
The First Coen Brothers Movie That Has Disappointed Me
Verified purchase
Based on their past work I was hoping for another but this is not the case, I watched the first half of the movie hoping it was character and plot development that was a set up for the usual off beat and quirky movies they have made so many of. But this is one I will be throwing away..

There wasn't a single character who drew my interest nor was there even a plot during the first half. The second half is based on a murder set up with an all too sudden and bewildering fini.
2 people found this helpful

Carol F. MetzgerReviewed in the United States on April 3, 2020
4.0 out of 5 stars
Intriguing, entertaining, artsy
Verified purchase
I needed to complete my Coen Bros viewing agenda, and I'm glad I did. But this is not their best. As far as I can tell, it is a core dump of elements clogging the creative river on the way to Miller's Crossing. And it shows. HOWEVER I still enjoyed seeing it. John Goodman is amazing; I think he and Turturro made the film. The other characters were pretty stereotyped and predictable. I believe that was intentional and a satire of the noir genre.

I really want an answer to one burning question. No, not, "was the head in the box." Was Barton Fink styled to look like Harold Lloyd on purpose?

Doug Barger - AuthorReviewed in the United States on February 3, 2014
5.0 out of 5 stars
Barton Fink Delivers Quirky Entertainment
Verified purchase
I had to watch this film for college film class so I was glad to save a little money using my Prime account.

Barton Fink is rich in cinematic language communicating much more than just the words you hear the actors and actresses say.

Set during a time when fascists powers were on the rise in parts of the world, the main protagonist is Barton Fink.

Fink starts out as a playwright who enjoys some critical acclaim for his play in New York and as a result, Hollywood comes calling. At first, he's reluctant to "sell out" his belief in representing the common man because he believes he'll be pressured into writing purely for profit, he eventually makes the move...and that's where the action really begins! There are more than a few completely unexpected plot twists and plenty of action at just the right times. What does the picture of the girl sitting on the beach mean to you?

I enjoyed this offbeat, quirky and yet fun film as I got to hang out with a fellow writer, Barton Fink.

I think you'll enjoy it too.

Barton Fink quite simply is a writer who cannot see the forest for the trees. He is so taken with the fact that he is a writer that he can't write. He is so idealistic that he misses fantastic opportunities to become a writer for the ages because he wastes precious time proeselytizing. John Goodman perfectly sums up eveyone's frustration with Barton Fink when after a series of unfortunate occurrences, Barton asks him "Why me?" to which John's character answers "Because you don't LISTEN!"

Set in 1930s Hollywood we follow the exploits of a one-hit wonder, Barton Fink, who has written a successful Broadway play and is summoned by the powers that be to Hollywood. After much cajoling to take the job from his agent, Barton arrives in Los Angeles determined to become the writer for the common man where he insists true stories live. The trouble with Barton, however, is he does not have time for the common man because he has so romanticised their lot as well as his particular quest in speaking for them.

I have decided after a slew of Coen Brothers films I currently have in my collection, that any project these guys are involved with deserve more than passing scrutiny.
2 people found this helpful

It's That Guy PhilReviewed in the United States on October 12, 2015
5.0 out of 5 stars
One of my favorite quirky "cult" films
Verified purchase
One of my favorite quirky "cult" movies. I have loved this film since it first came out, and enjoy watching it again here and there. I never had it on DVD before, so it's a nice addition to my collection. The story line is great. It sucks you in right away with that curiosity of whether or not it will be boring, but ever so carefully, the twists begin and before long you are entranced until the end... which is worth waiting for.
As well, John Turturro and John Goodman are both excellent in their roles, as this showcases their best attributes.
8 people found this helpful
Amazon customerReviewed in the United States on August 27, 2001
5.0 out of 5 stars
...that Barton Fink feeling...
Verified purchase
"Writers come and go...we always need Indians." "Why don't you drop by my bungalow this afternoon... and we will discuss wrestling scenarios...and other things literary." "To forge reality out of everyday life..." "The common man will still be here when you get back. Who knows? They may even have one or two of them out in Hollywood." This wonderful, dark, satiric, sardonic commentary on "noble" writers...and the Hollywood system is so rich in crafty and satiric lines that you almost are forced to go back and watch the film over and over again just to get them all. "Barton Fink" is a wonder to behold...to absorb...to be in awe of...and in jaw-dropping "horror" of...you almost feel like the first-night audience at the stage production of "Springtime for Hitler" in Mel Brooks' hilarious film, "The Producers." As the person watching "Barton Fink," you just can' quite believe the genius, the wit, the dark satirical vision at work right in front of your eyes...so, disbelief...and nervous laughter...and hilarious acceptance finally overcome you...the vision is so dark, and "awful" (especially the last scenes in the hotel) that even a burning apocalypse and madness and death seem... finally...horribly hilarious. Fictional "reality" as satire and sardonic commentary becomes nihilistic vision...accompanied by laughter and feelings of guilt that you shouldn't be having so much fun in the face of such dark happenings. The quickest comparison which comes to mind in trying to place this wonderful Coen vision is Nathanael West's *Day of the Locusts.* That, too, is a very dark, satirical, and horrible vision of Hollywood and ends equally with an apocalyptic vision of destruction. This film is so witty...and deliciously "wicked" in a most satirical and sardonic way...that it would not get old even after 5,280 viewings. The sharp edge... the cheeky wit...the cutting cleverness...just get better and better with each viewing! "Seeing is [not] believing" in this case...seeing is experiencing chutzpa raised to the level of finest art... they don't get much better...more inventive...more clever...more wonderfully satiric than this!
5 people found this helpful
See all reviews
Back to top
Get to Know Us
Make Money with Us
Amazon Payment Products
Let Us Help You
EnglishChoose a language for shopping. United StatesChoose a country/region for shopping.
© 1996-2022, Amazon.com, Inc. or its affiliates