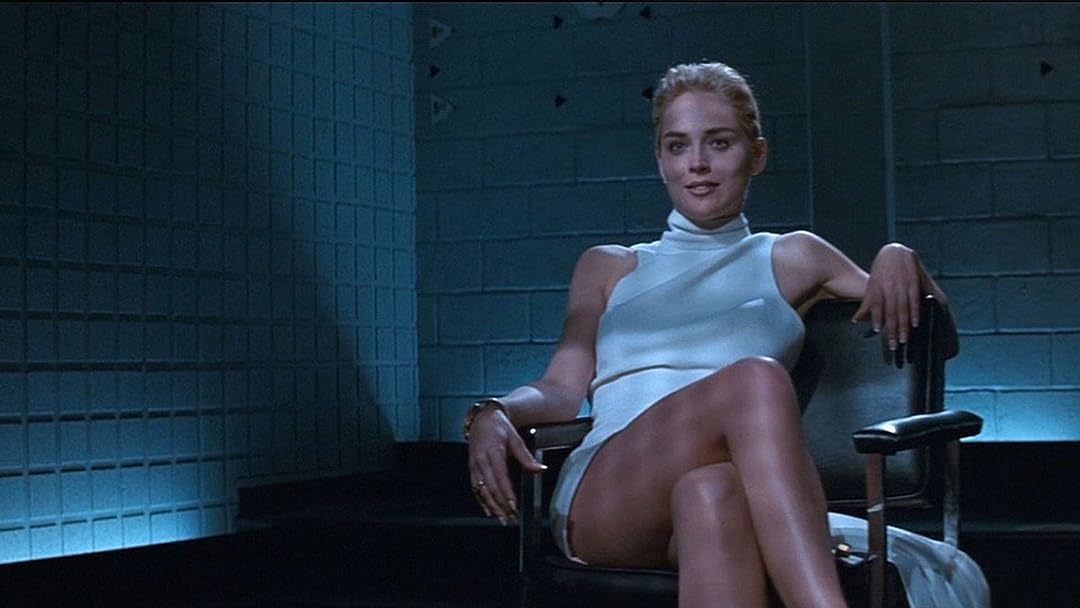 (3,740)
7.02 h 8 min1992X-RayR
A nightclub owner is killed, with an MO mirroring the ice pick murder plot written by the club owner's novelist girlfriend. The detective assigned to the case becomes erotically involved with the prime suspect, despite ominous signs of her guilt.

CrossReviewed in the United States on June 2, 2022
4.0 out of 5 stars
Good
Verified purchase
Received DVD in good condition. No scratches or smears.
One person found this helpful

benjamin bannisterReviewed in the United States on July 17, 2016
5.0 out of 5 stars
Well-Written and Well-Made Sexual Thriller
Verified purchase
I love this movie. It feels like Paul Verhoeven studied his Hitchcock and brought a team of very talented filmmakers together to make the ultimate Hitchcockian-inspired sex thriller.

— THE WRITING —
At the time of its release, Joe Eszterhas' script prompted a bidding war that would make him the highest paid screenwriter at the time. While some may mock the trashy quality of it, you have to admit it's very enjoyable trashy writing, with a few memorable quotes to fill your life with.

— THE ACTING —
Sharon Stone was born to play Catherine Tramell. It was meant to be. She's a beautiful, blonde, seductress, who's rich, smart, and knows exactly how to work people. Instant iconic character. Everyone else is perfectly fine in their roles.

— THE CINEMATOGRAPHY —
Jan de Bont, who would go on to make 'Speed' and 'Twister' was the cinematographer for this film. And boy does that man know how to frame and move a camera around. Every shot is done with a purpose, you see what you're supposed to see, you are shown what is supposed to be revealed, and everything is framed beautifully.

— THE MUSIC —
The music is perfect for this movie and on its own. Jerry Goldsmith was pushed very hard by the director, and what he's created here is worthy of his nominations for an Academy Award and a Golden Globe Award. I have the [[ASIN:B0000014SR Basic Instinct: Original Motion Picture Soundtrack]], and I love the album. There is one track in particular, "An Unending Story," it was playing one day while I was coming home from work; it felt like I was in a movie, that I was being stalked, and I had to look behind me at times just to make sure.

— THE STORY —
This is a great mystery and thriller, that just happens to have explicit sex in it. You are introduced to a few main characters, which includes a detective, and you're trying to figure out what's going on just as much as he is. Things are played multiple ways so you can consider multiple scenarios. You are taken along for this ride until the memorable last shot, which if you listen to the great commentary track, explains everything.

— SUMMARY —
Yes it has violence, yes it has sex, but it also has a great story, writing, acting, music, and cinematography that pulls it all together. If you've never seen Basic Instinct, you need to make the time and enjoy this mystery thriller. Recommended.

Rafael A. SerraReviewed in the United States on June 25, 2022
5.0 out of 5 stars
Sharon Stone looks astonishing!
Verified purchase
This specific edition of Basic Instinct looks amazing, it is the uncut version, it has all the documentaries and behind the scenes that the DVD had.

Steve T.Reviewed in the United States on August 14, 2009
5.0 out of 5 stars
Here's the scoop on the UNRATED version and more
Verified purchase
Well, after much exhaustive work and buying three different DVD's of this film at Amazon, four have been produced so far bye-the-way. As a reviewer said earlier the ASIN: B00005N919 on Amazon as 'Basic Instinct (Collector's Edition - Unrated) (1992)' is the version with the deleted scenes that the Director was forced to cut from the theatrical release back in 1992. I have added a couple of pictures of the copy (3rd and 4th customer pictures in the picture list by me) that I received from a seller under the product ASIN: B00005N919, of the DVD case front and back with notes added for explaination. By-the-way, there is no main picture on Amazon for this particular version of the DVD, only customer pictures and this is defineately the version to buy. This DVD did come with the 'Ice Pick' and is still called a Special Edition because of that Ice Pick (pen) included. I also bought another copy with ASIN: B000E5N684 and the Amazon title of 'Basic Instinct - Director's Cut (Ultimate Edition) (1992)' and that has a Sharon Stone interview (recently) added to it and is the last DVD copy (non blu-Ray) to be made. I watched this version also and because it says Director's Cut and Unrated on the lower bottom part of the DVD case, it does have the left out scenes that were deleted in the theatrical release also. The other one I bought ASIN: B00005N91B also came with the Ice Pick, but it only say's Special Edition on the DVD, this does not include the cut scenes in the theatrical release, but is a Special Edition because of the Ice Pick (pen). Another reviewer did talk about the extra scenes in the UNRATED versions and what they include, so I will not go into that, just see his review for that info. I hope this helps clarify the many different releases of this DVD that I have found so far here at Amazon.

Also for you that do not know what an ASIN is, here you go:
All items in the Amazon catalog are identified by 10-digit ASINs (Amazon Standard Identification Numbers). The ASIN search tool on their site is able to search for items by ASIN. Amazon assigns these ASIN numbers, it helps them to ship the correct item.
12 people found this helpful

librichReviewed in the United States on August 11, 2014
5.0 out of 5 stars
Superb
Verified purchase
Where most of the attempts to reinvent film noir fail, this film succeeds. The concept of transgression is translated into a modernized setting in a way that embraces film noir values, but at the same time feels utterly non-derivative. Much of the plotting and dialogue is wonderfully complex and subtle, and Verhoeven gives the whole thing a uniquely perverse spin. The music is worth a viewing by itself, as it is stunningly effective. In a film like this, you don't expect a score so lush and romantic, but it works. The film has perhaps two knocks. It is, when all is said and done, a whodunit, and carries all the negatives of that genre, the worst of which is the plethora of hints dropped to implicate this character or that. The other knock is more serious. There is a giant hole in the story which becomes apparent at the very end. From the get-go, Trammel tells Nick that he (the detective in her story) is going to fall in love with the wrong woman and she's going to kill him. And of course the ice-pick revelation at the very end of the film is meant to confirm that. But none of this works. Trammel has spent years orchestrating the perfect crime, committing a string of murders and drawing a net around Garner/Hoberman to implicate the psychologist and put herself in the clear. Having succeeded with all of that, Trammel cannot kill Nick at the end--especially not with an icepick. That would blow the whole thing. Irrespective of that, BI is a great achievement and worth many viewings.

Update 11/10/19: After a number of additional viewings, I might soften my criticism of the hole at the end. Trammel is diabolically rational and devious in engineering the appearance of Garner's guilt. But at the same time, the film does a good job of persuading us that she is a wildly emotional creature and genuinely distraught that all the people around her die. It could be argued that, despite having committed the perfect crime, she's so sick that she might kill Nick anyway, without concern for the consequences.
19 people found this helpful

Pat TamReviewed in the United States on January 29, 2014
3.0 out of 5 stars
On Basic Instinct
Verified purchase
The movie was good, of course only God is Good, but it had a drama detective attitude. Several times the main character, the detective, and in with the other detectives, had a joke on the cinema goers. It went way over my head. To digress, gory midnighters who watch TV horror shows, i.e. Frankenstein, that are 10-13 years old, aren't capable of waiting for their parents to come home from work, and in order to keep themselves from falling asleep, that's what they do. Watch late night detective. There is so much blood and guts And all the blond women looked exactly alike. Even I could not tell them apart, and I am 63 1/2. Well, one important thing is do doctors agree that sex, violence, upper class FBI life/style living in the same environment as Basic Instinct, would make an actor in an unsustainable attitude to everyone but you draw an invisible line that parents would not let their kids cross. Even young entrepreneurs of all races will not be able to say honestly, that Basic Instinct did not affect them in a negative way. It showed the use of cocaine, the mention of marijuana. I live across the street from a public hospital, and all the workers are making auditable negative grunts, that would especially excite young black women to meeting Caucasian men. I noticed that Michael Douglas was physical with one female actress, she just missed out her turning point when the ice pick fell off the bed. I guess that may be a draw that the film has to the public. Only Michael Douglas stands out as an individual, all the other character actors, look the same, act the same, and behavior the same. I guess that's when the paradox comes alive. An real FBI agent enters a space where everyone is look a likes, and only one detective is recognizable. Yeah, I liked the story and acting an everything, but my neighbors and the hospital workers pretend to be to high class for the likes 'o you.

Amazon CustomerReviewed in the United States on April 20, 2022
5.0 out of 5 stars
Fine
Verified purchase
Fine
See all reviews
Back to top
Get to Know Us
Make Money with Us
Amazon Payment Products
Let Us Help You
EnglishChoose a language for shopping. United StatesChoose a country/region for shopping.
© 1996-2022, Amazon.com, Inc. or its affiliates