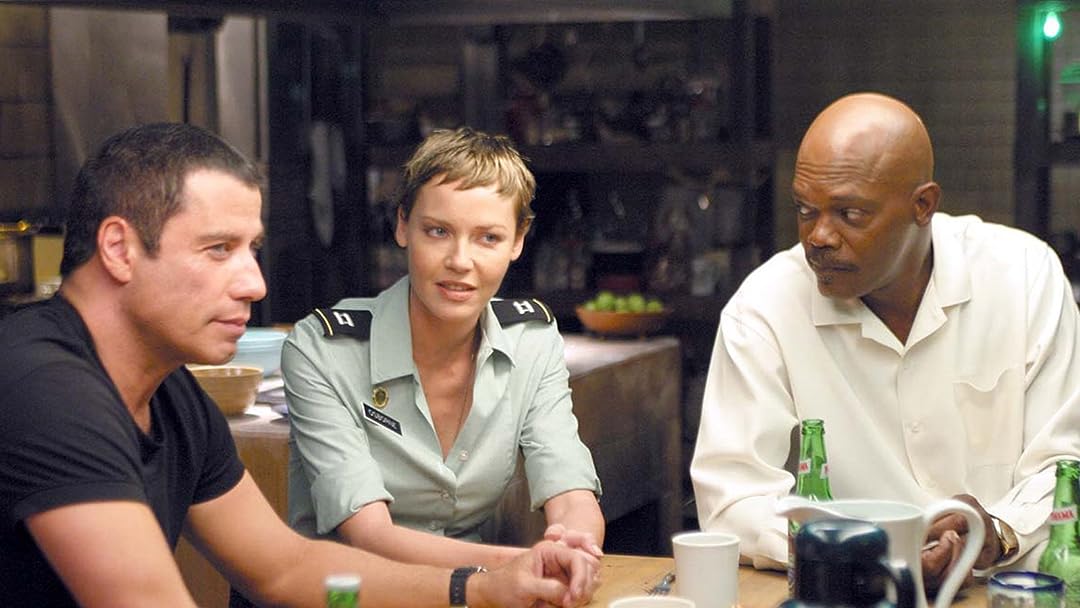 (1,762)
6.41 h 38 min2003X-RayR
A DEA agent investigates the disappearance of a legendary Army ranger drill sergeant and several of his cadets during a training exercise gone severely awry.

Kindle CustomerReviewed in the United States on September 6, 2020
1.0 out of 5 stars
Twisty twists.
Verified purchase
This could have been a decent mystery if the writers didn't think they needed to take a ball of yarn plot and give it to a dozen kittens to snarl it up. In the end, after some thousand or so plot twists the end scene is just stupid because there were so many twists that the writers clearly gave up and said "screw it, just negate every single moment prior to this and call it a wrap."
24 people found this helpful

KULBIR SINGH DHINDHWALReviewed in the United States on September 18, 2020
1.0 out of 5 stars
What a dumb movie!!!!
Verified purchase
I watched this movie as a kid and really liked it....pulp fiction hangover I guess....This movie popped up un Prime, I thought I would watch it again....Bad Idea!!!!
First of all, the geniuses at amazon prime, in their infnite wisdom have put the end of the movie spoiler as placeholder, where Sgt. West is sitting with Osborne and Hardy. This gives the plot away before you even click to watch the movie. Apart from that, Dunbar, Ray whoever that was, how was he saved? Could be someone else..didn't care...the concept of 8 was stupid....maybe they wanted to make a sequel...Btw Tom Hardy is the dumbest investigator there is.... looked at the box office collection on box office mojo, this movie was a dud...
11 people found this helpful

ScottReviewed in the United States on October 29, 2020
5.0 out of 5 stars
Well, I wasn't gonna review this, but all those negative reviews?? Just, ah.. no
Verified purchase
Very crafty movie. Not so much of an action flick, or romance, as a "thinking" movie. It's not what you really expect it to be.

Yeah, the screen writers/authors took some liberties with reality, which among other things shows that they had very little knowledge of the military OR Rangers, but that's OK. Also, you'll have to forgive the "magic" sequences, soldiers appearing from nowhere, superhuman soldiers, etc.. But, that too, is about par for the Hollywood course.

The acting was pretty good, and I really don't like much Travolta has made. Production quality, "B+", i.e. pretty good. The plot was intelligent, i.e. something that keeps you thinking. I object to the writer "hiding" details in the story development, so that the complex, multi-plot ending looks just amazing, but again, that's not unusual.

So, about 4.5 stars from me, probably should be a little bit lower, but I'll toss in a 5'ver. The movie drags in a few spots, that's my "negative".

Overall, I don't regret the time spent watching, was entertained, and unfortunately, I can't say that about 95% of what's offered as "movies" or "TV" today.

joel wingReviewed in the United States on September 24, 2020
4.0 out of 5 stars
Army investigation centers around memory and subjectivity as each witnesses tells their tale
Verified purchase
Samuel L. Jackson as Sergeant Nathan West and his squad of Rangers disappear during a training mission in Panama. Three of them are found but one them shoots another. DEA Agent and ex-Ranger Tom Hardy (John Travolta) and Captain Julia Osborne (Connie Nielsen) are assigned to investigate what happened to West’s unit. Hardy knows West while Osborne resents the fact that Hardy was called in when he’s not Army. The movie unfolds using a series of flashbacks with a focus upon how West treated his soldiers. The movie is a criminal investigation that deals with memory and subjectivity as each person recollects events a different way.

Hardy and Osborne are your typical odd couple. Hardy is unconventional in his methods while Osborne does everything by the book. Jackson has a flair for characters that get mad and yell and Sergeant West was one of those roles. West was portrayed as an unrelenting sergeant who pushed his men to the breaking point.

The movie is a great police procedural with twists and turns and the plot goes much deeper than it initially seems.
C
6 people found this helpful

birdwatcherReviewed in the United States on June 14, 2020
3.0 out of 5 stars
Lots of hard to see scenes
Verified purchase
A bit difficult to follow, back and forth in time and place and skewed viewpoints and hidden agenda. Then there's the non sequitur ending which leaves you feeling cheated. Lots of crude language. Not really any sex. A few cleavage shots in the requisite club scenes. Some of the actors are really good and some, like the lead female and the gay character, over act badly. Many scenes are too dark, too shaky, too obscured by rain, or explosions or anything else to cover up that nothing much is happening. I'm starting to feel like It's a Dr. Seuss tale.
It's an ok movie which I may rewatch someday. But it won't be anytime , if I have my way.
9 people found this helpful

Troy R.Reviewed in the United States on April 30, 2021
1.0 out of 5 stars
Horrible movie: incoherent story, ridiculous dialogue and poor acting.
Verified purchase
This movie is a complete mess with no sense of realism whatsoever, it might as well be categorized as a fantasy movie. Heck, Predator or Terminator are far more realistic than this garbage. This movie is completely unpredictable but only because none of it makes any sense whatsoever. The ending is so ridiculously stupid that you're left wondering what the entire rest of the movie was even going on about other than trying to deceive the viewer into believing that this is some deep psychological thriller when the truth of the matter is it's about as shallow and hollow as a movie of this ilk usually are. It's like the old saying goes: If you can dazzle them with brilliance, baffle them with BS. That pretty much sums up this movie. I'm just shocked that this poor excuse of a movie is rated so highly by so many other people; therein lies the true mystery about this movie!
2 people found this helpful

D.A.S.Reviewed in the United States on May 8, 2021
1.0 out of 5 stars
stupid and sexist-not believable or compelling
Verified purchase
I disliked how Travolta character is constantly a sarcastic smart ass with no reason to be and the woman he is paired with is made to look stupid all the time. None of it is believable. And I do not give a sh...t about any of the characters. It is really a movie about men's egos and does a disservice to the actual military and to the good actors. I know Holly wood is abous suspension of disbelief, I get that, but the relationships should be convincing and they aren't. Also the dialog is so bloody tiresome in its attempt to be tough and clever.

Watch just about anything else. This is not worth it. Maybe young kids who don't know anything about anything might find this entertaining....kids over 12-it's pretty violent.
One person found this helpful

john lambertReviewed in the United States on March 12, 2022
5.0 out of 5 stars
This is not an episode of Cheers
Verified purchase
This movie is about as exciting as playing pass the hot potato in a crashing plane while blind folded. I loved EVERY MINUTE of this driller drama Thriller, took a minute to feel the burn; thought, the growing Hurricane and deep throbbing plot drove this straight into the juicy canal of what the F is going on. The constant probing of this who dunit, what is it is fairly straight forward. I knew immediately there was a long con about to be born: Between the lighting, the winds, the screaming dialogue, and the rapidly shifting plot cuts, scenes, that it only became a question of slowly staircasing the spiraling helli-ride as the plot was delivered straight into your face, Ladies and Gentlemen it's A mind bender,

My wife and I loved it; it was a mash up of Apocalypse now meets the re-make of cape fear,

In closing Yes you did, Yessss you Did
See all reviews
Back to top
Get to Know Us
Make Money with Us
Amazon Payment Products
Let Us Help You
EnglishChoose a language for shopping. United StatesChoose a country/region for shopping.
© 1996-2022, Amazon.com, Inc. or its affiliates