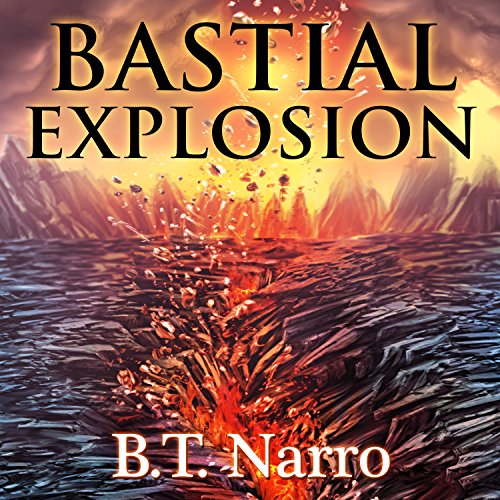 As Effie and her roommates learn firsthand the true savagery of their enemies, anger and grief threaten to overtake them. While dealing with internal turmoil, each student also must come to terms with his or her role in battle - and soon.

The Krepps have twice the numbers of Kyrro, and the frightfully strong creatures are eager to kill. After managing to anger the entire Academy during his introduction, Zoke learns that behaving like a Krepp makes him more of an outcast with his new allies in Kyrro than he was with his own race. With his sister Zeti on the opposing side as the gruesome events of war unfold, soon the only thing the siblings have in common is a waning hope that they won't see each other on the battlefield. But before a clash of unprecedented proportions can occur, something unheard of is discovered lingering deep below Tenred that may change everything.

In Bastial Explosion, we see the return to the original format of the first book, Bastial Energy: it's told from the points of view of multiple characters. We find ourselves back in the Academy with Effie, Steffen, Reela, and their friends. On the Krepps' side of the story, we follow Zoke, who has sided with humans, and his sister Zeti, who stays loyal to the Krepps' cause of finding and eating all the Slugary they can find. While other characters are integral to the plot development, in my opinion, Effie and Zeti steal the show in this book. While Effie was the most interesting character in the first book, despite her being of secondary importance, and Zeti was written in somewhat subdued tones, with her brother outshining her, now they become much more developed and important to the plot. Through their transformation alone we can trace what is happening in the story and where it is headed--the all out war.

The build up to the war is interesting to read because it happens rather naturally, gathering the steam slowly, until the end of the book, where we can see how the author handles description of a large battle. Which is rather well, BTW. There are some revelations, and questions answered in this book, and a rather spectacular titular explosion that takes place. However, as always, the main strength of Bastial/Sartious novels is character development: patient, detailed, and relevant to the story.

It will be interesting to see what will happen in the next installment of the series, with Cleve finally being back into the fray and the promise of the upcoming hostilities finally delivered.

Cheri174evr
5.0 out of 5 stars The Rhythm of Rival series is a must read for hard fantasy lovers.
Reviewed in the United States on December 10, 2014
Verified Purchase
Except I have no idea why it's termed, "The Rhythm of Rivalry". Every book begins with "Bastial", and a series with that in the title would make more sense. All that aside,

I loved every single book! The character development was excellent, with several conflicts needing resolution, and the resolutions made sense. There are passages where you'll feel the sorrow, scenes where you'll feel the love, and arenas where you'll celebrate the victories. Narro has an interesting take on Mages (not wizards), Psychics, Chemists (the physicians and other scientists that work with chemicals and potions), and of course, Warriors (which are like all warriors - swords, archery, etc). There are even elves with attitude... and psyche. Watch out for these guys, and hope the ones you run into are the good ones.
Read more
Helpful
Report abuse

Mike
5.0 out of 5 stars Another gripping story by BT Narro.
Reviewed in the United States on October 28, 2013
Verified Purchase
The plot of Bastial Explosion starts up so quickly, at first I was wondering if I should stop to reread Bastial Energy. But by the time the first chapter was done, I was completely sucked back into the story, and I couldn't put it down. There's so much to enjoy in this series, and Bastial Explosion is the best one yet. The complexity of the character's emotions along with their relationships to each other are what make this book unique, but that's not to say the plot and action were anything less than stellar. I look forward to the next book.
Read more
2 people found this helpful
Helpful
Report abuse

Chris Dall
5.0 out of 5 stars the worst tease
Reviewed in the United States on November 14, 2013
Verified Purchase
The plot moves ploddingly slow, and yet the book moves at an incredible clip (to continue the horse terminology) - I cant figure out why I like these books so much, yet somehow they find their way to the top of my reading list upon each new release. I guess what I'm trying to say is that the author is certainly a great talent, and the world he has created is well done in a "whole" manner that Ive rarely come to see, lately. I can honestly say I'm looking forward to future installments, well done author.
Read more
One person found this helpful
Helpful
Report abuse

Joel
5.0 out of 5 stars Great Reading
Reviewed in the United States on August 26, 2019
Verified Purchase
Quite an imagination. I always marvel at what flows through an author’s head as he spins the plot on to paper. Quite entertaining and compelling.
Read more
Helpful
Report abuse

Luke
5.0 out of 5 stars It keeps getting better
Reviewed in the United States on November 21, 2013
Verified Purchase
Al reading this should be well entranced by this series. It stands with the best of the sci-fi stories being told today. Each installment of this series surpasses the already high standard of the one before it.
Read more
One person found this helpful
Helpful
Report abuse

Tammy L. Dodder
5.0 out of 5 stars Great read
Reviewed in the United States on November 5, 2013
Verified Purchase
I absolutely loved this book. I have all the books in the series. I recommend getting all of them. The characters and story line come together so well. I definitely is a well written book. Can't wait for the next one.
Read more
Helpful
Report abuse

Lance Nathaniel
5.0 out of 5 stars Bastial Explosion
Reviewed in the United States on December 4, 2013
Verified Purchase
Bastial Explosion was full of plot twist. I can't wait for the 4th hook. I felt kind of sad cause I'm done with it. But I can't wait for the next one. B.T. Narro has done a phenomenal job on this book.
Read more
Helpful
Report abuse
See all reviews

Zak Bond
5.0 out of 5 stars Great book
Reviewed in the United Kingdom on November 10, 2013
Verified Purchase
Great series, really liked it. I can't wait for the next one. I would recommend it to anyone who likes the fantasy adventure genre in middle age eras
Read more
Report abuse
See all reviews