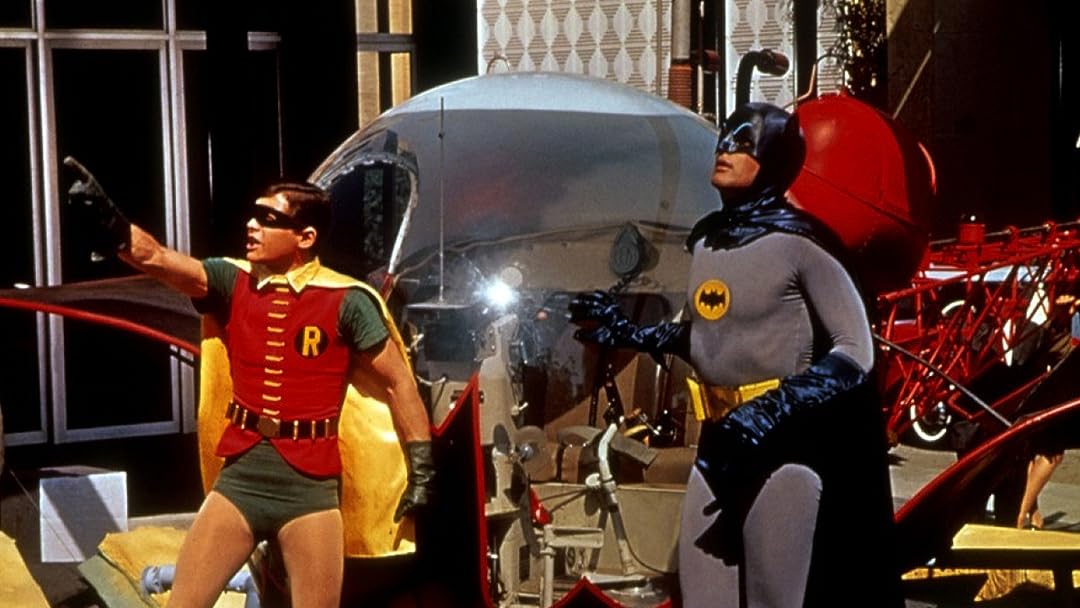 (4,644)
6.51 h 44 min1966X-RayPG
Batman and Robin battle the combined forces of four supercriminals who have stolen an invention and intend to use it maliciously.

Sean WanderseeReviewed in the United States on March 29, 2021
5.0 out of 5 stars
Holy Heart Attacks, Batman
Verified purchase
Gotham City’s four foulest fiends, the Joker, the Penguin, the Riddler, and Catwoman join forces to take down Batman and Robin once and for all.

There is a tie at the top of my favorite Batman movie between this, Batman: Mask of the Phantasm, and Batman Returns. Each is a little different than the other and each is an amazingly fun time. Usually when asked I go with which ever of the three I have seen last. I love the movie bright colours and seemingly endless energy. It is a wonderful counterpoint to the endless array of perpetually angry dark Batmans we get these days. The movie knows it is silly and leans into it hard. Watching Batman race about the seedy waterfront carrying a giant bomb trying to avoid the nuns, the young mother and her child, the three piece Salvation Army Band and finally a flock of ducks is hilarious. It feels like the writers are another super villain throwing obstacles at the cape crusader. You would never see a modern Batman do this and that is why I love this more than any Batman made in twenty plus years. Adam West’s indomitable calm is balanced perfectly against the wild energy of our cast of villains. You know they were having a great time and that energy comes pouring out in ever scene. From the start this movie when Batman is attacked by the most terrifying shark in cinema history to final umbrella battle on the submarine this movie just screams energy. You can’t help but groove along Nelson Riddle’s swinging score as Batman and Robin survive scrap after scrap with the most ridiculous means of survival. At no point does it take itself seriously and for a Batman movie it is such a refreshing change that I love this movie a little more each time I watch it. It perfectly encapsulates the Batman TV show with the crazy villains, bright 60s pop art colors, explosions of fisticuffs with appropriate visual sound effects, and one of the best Batmans of them all, a definite tie with Kevin Conroy but he had the advantage of just doing the voice. We need to all remove our cowls in honor of the great porpoise who gave his life so Batman could live and triumph over evil. His sacrifice will not go unmourned.

David JordanReviewed in the United States on April 29, 2021
5.0 out of 5 stars
Results may vary
Verified purchase
I rented this for viewing with a Girlfriend and her two Grandsons ( 11 and 9 ). We watched it for about 45 minutes and they ( the boys ) got up and left the room. We watched it for a few more minutes and I got a peck on the Cheek and an at-a-boy for my effort. Just about then we heard some commotion coming from the other end of House. When we went to see what was going on the two Boys where play fighting like Batman and Robin. I'm not kidding, their Mother went looking for the camera and said lets get a picture before they go back to their x-box. They tired out and wanted to watch it from the beginning, which we did. I had not watched this since I was their age ... this Movie is pure magic.
7 people found this helpful

Lewis S.Reviewed in the United States on April 23, 2018
5.0 out of 5 stars
Still a Good Movie For Kids & Adults!
Verified purchase
You missed out if you seen all the other Batman movies, but didn't see the original one! This original film from the sixties has a special kind of flair to it. Now, in some ways it's like a comic poke at the time period for the adults that are seeing it, while also being an exciting and funny film for kids at the same time.
The movie is packed with some big names of the day: Lee Meriweather, Ceaser Romero, Burgess Meredith, etc., and they all had to have had fun making this film!
21 people found this helpful

iraReviewed in the United States on November 14, 2019
5.0 out of 5 stars
It’s just a lot of fun
Verified purchase
The Special Edition Blu Ray of Batman The Movie is Awesome. I am so Glad to add this to my collection.
In my opinion you really cannot ignore the Impact that the television series had on the 60s generation. The Movie was meant really at first to sell The Batman T.V. Series over seas. It was a hit over in the states and did very well abroad.
If you are a Batman fan I highly recommend it for the fun of watching Adam West and Burt Ward having the time of their life playing the Dynamic Duo. It’s just a lot of fun.

Alejandro becerraReviewed in the United States on April 13, 2021
5.0 out of 5 stars
Remember not the old but classic valuable morels that taught the difference of good and bad
Verified purchase
Today’s movies today’s toys have changed dramatically from when I was a kid . Friends from school nieborhood friends would play with push toys planes that didn’t fly trains that we hand pushed around the track growing up in late 60s with threat of war . We used imagination with toys and played out in our minds the different things happening that day with our toys sometimes crash and burn others saving people . All though I do enjoy modern toys it’s good to remember classics like Batman and robin good against evil . We always knew that good would win evil would always loose . As kids every boy wanted to be Batman robin Superman . My baby brother would put a red blanket and pretend to fly . Now That’s imagination . Sadly it’s lost in kids you show them a toy they ask what does it do . I was able to In still imagination in my two kids to dream anything is possible .
2 people found this helpful

Doug MoodyReviewed in the United States on December 2, 2016
5.0 out of 5 stars
The Best Movie Ever Made.
Verified purchase
Classic American production, what a great view. I would advise anyone to show the new generation this masterpiece. It reminds me of watermelon Sundays and hot summer nights when my heart was young and gay. Adam West the majestic somber faced master, with his devoted Burt Ward rallying as the perfect foil parrying and cavorting through the majestic sets of a magnificent bygone era.
This movie represented the zenith of entertainment on this planet.
The only series to go near it, was the Star Trek original with Captain Kirk, and the crew of the good ship enterprise, reward yourself and buy this, then purchase the box set of the complete series. I have not opened my set yet, I am still savoring the bouquet of the the haunting memories that linger within my soul.

bhogan16Reviewed in the United States on April 9, 2021
5.0 out of 5 stars
High quality release, new features
Verified purchase
I was impressed by this Blu-Ray. It has everything the DVD release had and then some. The new special features were awesome — including a very detailed look at the parts of the batmobile, a music only track, a feature that shows you the filming locations in real time as they appear in the movie, and (I believe) other new features. All very well put together. A lot of work went into it that I wasn’t expecting. Required for any superhero fans Blu Ray collection
2 people found this helpful

bvReviewed in the United States on November 24, 2017
5.0 out of 5 stars
Way better than Affleck!!!
Verified purchase
I grew up on Adam west's Batman and still love him best❣️This movie is amazing and cheesier than a bowl of Mac n cheese! I personally love the camp factor of the '60s Batman and feel privileged to have met Adam west at a book signing. If you don't have time for the series, this movie will give you a hefty helping of it.
14 people found this helpful
See all reviews
Back to top
Get to Know Us
Make Money with Us
Amazon Payment Products
Let Us Help You
EnglishChoose a language for shopping. United StatesChoose a country/region for shopping.
© 1996-2022, Amazon.com, Inc. or its affiliates