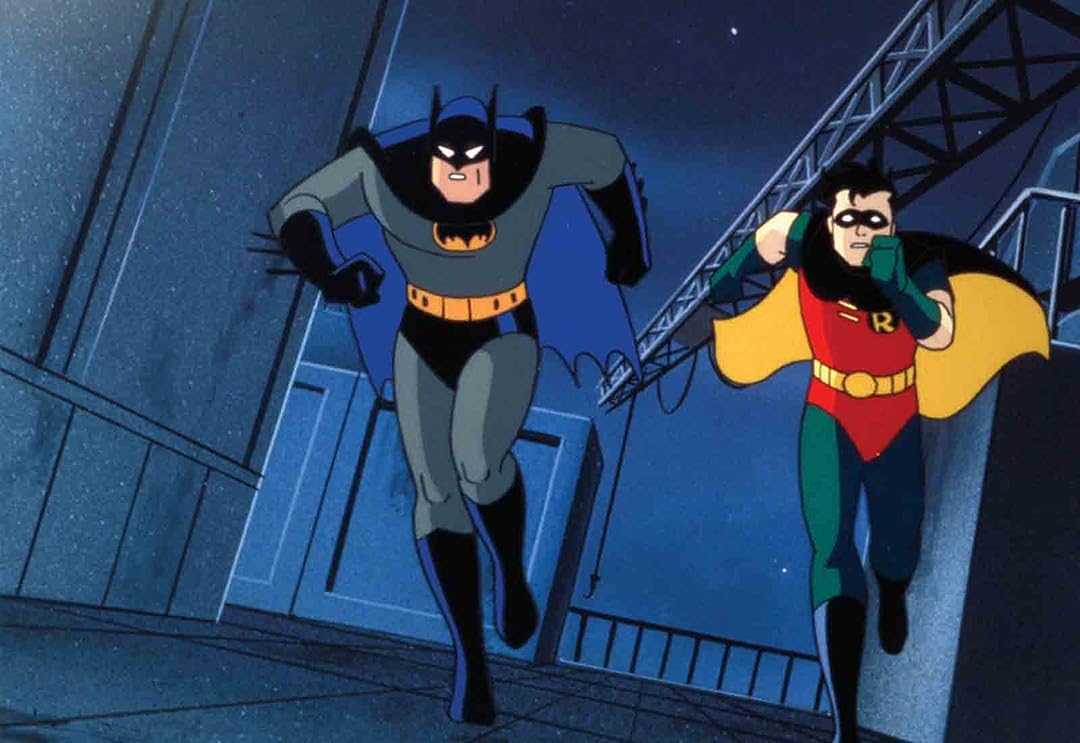 (5,615)9.01992X-Ray7+
Vowing to avenge the murder of his wealthy parents, Bruce Wayne devotes his life to wiping out lawlessness in Gotham City. The Dark Knight joins Robin and Batgirl, battling his inner demons as well as the evil figures who bedevil him.

BenReviewed in the United States on March 5, 2017
5.0 out of 5 stars
I Love It!
Verified purchase
I watched the Animated Series when they first aired some 25 years ago. Watching them again some 25 years later brings back a wave of nostalgia, from getting off school to watching Batman on an old 20" CRT TV at my grandparents' place, back when all there was to worry about was homework.

In those formative years, I didn't appreciate the series the same way I do now. When I played them again on Amazon, I could hardly believe my ears: The title credits started with a bang: Full orchestration! As I dove deeper into each episode, letting the sounds of the orchestra and the voices from my childhood fill the living room, my love and appreciation for the series grows.

The voice-acting is just terrific, from the way Batman conveys his moods and feelings to the seductive and voluptuous voices of Catwoman, Harley Quinn, and Poison Ivy, all without detracting from the fact that this was a series made for kids. Adults will still enjoy it. As for me, I will always think of the voice of Batman and the Joker as Kevin Conway and Mark Hamill. To this day, the way the Joker is animated and the way Hamill plays him still sends chills down my spine.

nommonsterReviewed in the United States on October 28, 2016
5.0 out of 5 stars
The golden standard all Batman/DC movies should follow
Verified purchase
This series is CLASSIC! Don't underestimate it just because it is in a cartoon format. For newbies to Batman or DC universe, this is the standard that all Batman portrayals should be held to. Sure the plot isn't complicated; you know Batman is going to save the day and catch the bad guy, but that's not what's excellent about the series. It's how true to character the series is. Batman isn't just millionaire playboy who does vigilante work at night. He's a detective. Yes the detective in Detective Comics. Movies don't portray that part of him, but it's what makes him so different from the other superheroes in the DC universe, is his intelligence and sharp instincts. The villains are iconic and Mark Hamil as Joker is such a treat. Goes to show that even if for kids, cartoons don't have to always be cute and bubblegum (like most of CN's shows now). It's dark appeal, mysterious allure, and even feminine seduction is really what makes this show THE Batman that fans have come to love and movie directors try (but fail) to bring to the big screen. Also, the music, opening and background, is FANTASTIC! Really sets the mood.

Warner Brothers, Zack Snyder, and CW network, you guys need to go back to these roots and do justice to the characters you guys keep ruining in your movies and TV shows!
33 people found this helpful
Report abuse

sleeReviewed in the United States on August 11, 2016
5.0 out of 5 stars
The BEST!
Verified purchase
My husband and I first watched this when we were still dating years ago. Now I am watching it with our 9 year old son. It is just as amazing as I remember it. My son is enjoying it as much as I am, even though some of the word play goes over his head. Fantastic artwork, old school animation, worthy scripts, talented voice actors, wonderful soundtrack...this series has it all. I love the original open (not seen until episode 2 in this Amazon set for some reason). The open is even more dramatic and stylized than the show. It is a pleasure to watch before each episode. My son can't wait to see each villain, but so far he loves all of the Joker episodes the best.
5 people found this helpful
Report abuse

T. DahlReviewed in the United States on April 16, 2014
5.0 out of 5 stars
One of the best animated shows to exist!
Verified purchase
I'm a bit biased due to my love for the Batman mythos but I've always felt, even upon rewatching it as an adult, that this show was fantastic. The team that put it together had involvement with the comics and knew how to tell a story in the Batman universe. The voice acting is top notch and I still think of "the" Batman or "the" Joker as Kevin Conroy and Mark Hamil respectively. In fact, Mark Hamil's joker is so revered that they've recently hired someone who could sound exactly like him to the do the voice for a recent video game.

The show deals with a ton of different enemies from the Batman universe and that is what makes it so fun. The problem solving is fun to watch and the scenery is engrossing, like the comics. This team has truly put together a tremendous series and it's worth a watch. I think kids would enjoy it more these days but call me a big kid because I definitely still put it on from time to time.

Dale M. HoustmanReviewed in the United States on February 4, 2016
5.0 out of 5 stars
What To Say That Hasn't Already Been Said?
Verified purchase
What is there to say? I think anyone who is already interested in the Batman character knows how marvelously imaginative and fun these stories are, and how well done. From the eye-catching retro Deco design (based on the 1940s "Superman" cartoons by the Fleischers) to the great array of established and - especially in the case of Harley Quinn - soon-to-be-established characters...these set the bar VERY high for television animation, and that bar has not been reached again. I can watch them over and over. The first season is probably the best, as the illustration style is the most purely 40s based, and Batman is a solo character, Robin being added later due to the insistence of the producers, who felt he would appeal more to children, although the toon is clearly not meant for children. But all seasons are worth a viewing...or two....or three...or four...etc.
2 people found this helpful
Report abuse

Susan RomanickReviewed in the United States on April 20, 2016
4.0 out of 5 stars
Good TV for young viewers
Verified purchase
I watched nearly the entire first season of this animated series with my grandson who is nearly 5. Although there is some violence - which little boys seem to thoroughly enjoy - the violence is not graphic or extreme. I didn't notice any inappropriate language. And the message in each episode was a good one - good behavior and actions wins over bad. The actions of the 'bad guys' prompted discussions and questions from my grandson as to what he had done wrong and the consequences of bad behavior. As each episode ended, my grandson eagerly looked forward to the next. I found this series much more appropriate for my grandson than some of the 'kids' shows on some of the network TV channels such as Boomerang which I find I have to closely monitor.
2 people found this helpful
Report abuse

Hector GonzalezReviewed in the United States on January 7, 2014
5.0 out of 5 stars
Childhood Relived
Verified purchase
I love the animated series. My biggest regret was never buying the boxset of the entire series when it was available for $70. Now we have con men basically pushing towards $300 for it. However thanks to amazon we get at least 2 seasons worth.

The series is structure is dark and gothic, with an art deco flair to it. I think it's great that they used the darker tales from the comics and Tim Burton movies as inspiration for the series. Kevin Conroy is great and of course the main reason people watch it is Mark Hamill/Joker. Everything about the series was awesome and memorable. Nearly all the villains of the Batman pantheon are used. Clayface, Man Bat, and Scarface (the dummy) are standouts and the Scarecrow has much more gusto than even the Nolan movies'.

As an adult, you realise just how mature the content is and you wonder how the studio got it passed by the WB censors. Still is very enjoyable even today that, although my wife never watched it back in the 90s, she actually enjoys them when I put on a few episodes. Entertianment value, it still holds up. Sometimes the animation can be a little wonky, but still has moments where it looks like a high budget animation. Season 1 was probably the best. It introduces us to the villains and explores Bruce Wayne/Batman.

Watch Season one, you will never forget it.
2 people found this helpful
Report abuse
See all reviews
Back to top
Get to Know Us
Make Money with Us
Amazon Payment Products
Let Us Help You
EnglishChoose a language for shopping. United StatesChoose a country/region for shopping.
© 1996-2021, Amazon.com, Inc. or its affiliates