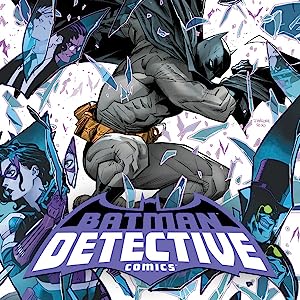 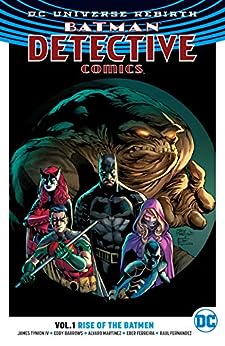 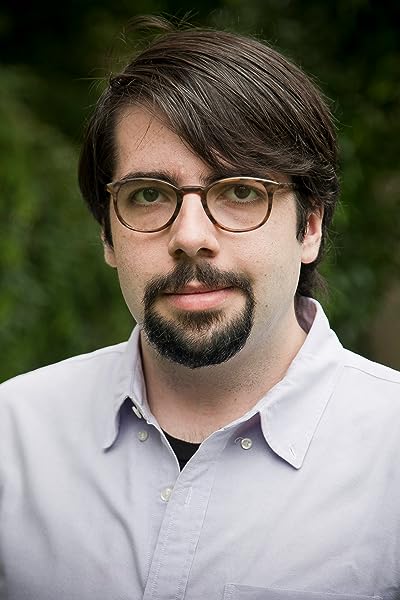 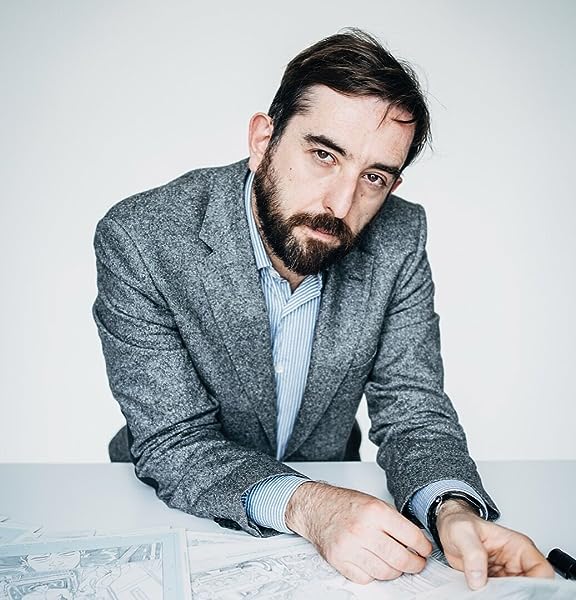 by James Tynion (Author), Eddy Barrows (Illustrator, Artist), Alvaro Martinez (Illustrator, Artist), Eber Ferreira (Artist) & 1 more Format: Kindle Edition
Book 1 of 19: Detective Comics (2016-)
See all formats and editions
Sorry, there was a problem loading this page. Try again.
An elite fighting force modeled after the Dark Knight has invaded the streets of Gotham. Their armor, weaponry and surveillance equipment are based on Batman’s tech and tactics, but they’re far beyond anything he’s ever seen. And while these Batmen’s motives remain a mystery, their targets are all too clear…

Batman knows he can’t face this foe alone, and neither can the crime-fighters caught in the crossfire. So with Batwoman-secretly Bruce Wayne’s cousin, Kate Kane-as his general, he’s organizing the next generation of Gotham heroes into an army.

Tim Drake, a.k.a. Red Robin. Stephanie Brown, a.k.a. Spoiler. Cassandra Cain, a.k.a. the Orphan. And reformed criminal Basil Karlo, a.k.a. Clayface. These are the shock troops in Batman and Batwoman’s war. When they finally see the face of their true enemy, will they stand together…or fall apart? 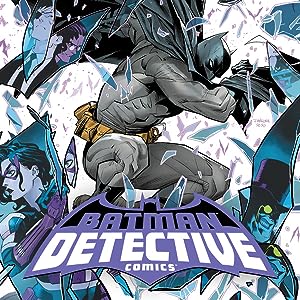 “Detective Comics is my favorite DC title right now”—io9 --This text refers to an out of print or unavailable edition of this title.

4.6 out of 5 stars
4.6 out of 5
294 global ratings
How are ratings calculated?
To calculate the overall star rating and percentage breakdown by star, we don’t use a simple average. Instead, our system considers things like how recent a review is and if the reviewer bought the item on Amazon. It also analyzes reviews to verify trustworthiness.
Top reviews

Charlie GriffinTop Contributor: Batman
5.0 out of 5 stars Fan-Favorites team up
Reviewed in the United States on June 20, 2017
Verified Purchase
Superhero team-ups are not too difficult to stumble across in this day and age, and despite being a "lone hero" type, Batman is very often found in the middle of them. This run in Detective Comics, then, mixes things up just enough to stand out; this group is set up to act independently of Batman. The team is composed of fan-favorite allies Batwoman, Tim Drake's Red Robin, Spoiler, and Cassandra Cain (who is now under the alias Orphan rather than being tied in as Batgirl), as well as the unexpected but well-utilized Clayface, who is shown here at one of his most redeeming and sympathetic portrayals in recent memory. And while Batman is certainly important to setting up the team, it's made very clear Batwoman and Red Robin are the ones running the team.

Simply put, everything you could like about the book is worthwhile. The storytelling is expertly crafted, the characters resonate well, the art is spot on. Spoiler and Cassandra don't get quite as much focus as Tim or Kate, but they still have enough impact in their focus to merit their inclusions. I highly recommend this book.

Richard J. EstepTop Contributor: Batman
5.0 out of 5 stars Off to a flying start
Reviewed in the United States on August 19, 2017
Verified Purchase
Rebirth: Detective Comics is off to a fine start. James Tynion weaves a fascinating web of deceit and betrayal in what is, unusually enough for a Batman tale, an ensemble piece. When a shadowy paramilitary force whose tools and tactics are suspiciously close to his own show up in Gotham, Batman counters them by building his own vigilante team. While I'm more a fan of the lone wolf Batman stories, this is done so well that I thoroughly enjoyed the ride. It's also nice to see an adversary that doesn't come from the usual pool of staple Bat-villains. Very much looking forward to volume 2 and seeing where this story goes next.
Read more
4 people found this helpful
Helpful
Report abuse

While this is a good "Rebirth" reintroduction to most of these characters, I recommend you know a bit about the Bat-Verse before diving in...Though it's not necessary. We pick right up into a story jam packed with many characters, lots of emotion, and plenty of action and dialogue...And plot twists. If the "Batman" title is about Batman's heart, this book is about his fists. This book will leave you wanting more from these characters!

mrsdoc0924
4.0 out of 5 stars Bat family abound in this book
Reviewed in the United States on October 31, 2017
Verified Purchase
If you really enjoy the extended Bat-family (Batwoman, Red Robin, Spoiler, Orphan and Clayface), you’ll enjoy the team based adventure of this story. I’m more of a Batman solo adventure fan with him working his detective moves and some Bat-battles obviously. This book has a great climax (no spoilers here) but definitely sets up for the next book. A great read but loses a star for my own preference of less focus on the other Bat-family members.
Read more
2 people found this helpful
Helpful
Report abuse

Enzo BC
5.0 out of 5 stars Not just another Batman and team comic
Reviewed in the United States on October 6, 2017
Verified Purchase
Spoiler free review.

This is my first "Detective Comics" purchase EVER so sorry if I don't know a lot of things. The story begins with Batman and Batwoman assembling a group of superheroes to become a "team". I say "team" because they don't have a name yet. The members are: Spoiler. Orphan, Red Robin and Clayface (yes, you read that right). All 4 of them show great promise and their abilities are put to the test against a very powerful organization. There is a huge plot twist at the end and I'm very interested in seeing where they go with this.

Jess
5.0 out of 5 stars Nice...
Reviewed in the United States on August 1, 2018
Verified Purchase
When an army of Batmen come to Gotham, Batman builds his own army complete with Batwoman as his general. As usual Batman is the only one with the whole story and he's playing his cards close to the chest. Full of intrigue and lots of action, the writing pulls you in for a real page turner and the art catches the eye in its detail and colors. A great read that ends with a twist.
Read more
4 people found this helpful
Helpful
Report abuse

Steve
5.0 out of 5 stars A Must Buy for 90's and 00's Batman fans!
Reviewed in the United States on February 19, 2017
Verified Purchase
Another year, another company-wide reboot. This time around the theme is 'Rebirth' and Detective Comics has been relaunched. The concept for Detective Comics is unlike any other we've seen for it, it's apparently a team book now, made up of Batman's former partners or close coworkers and uh, Clayface, for some reason. The cast: Batman, Batwoman, Tim Drake, the third Robin, now calling himself Red Robin, Cassandra Cain (formerly Batgirl, now called Orphan), Stephanie Brown, the Spoiler and Clayface. The idea is a really good one. There have been so many great bat characters over the years, but there just aren't enough books for them all. Rather than just let these characters fade away into obscurity, they put them into this book so the fans still get to see them.

While every character gets their moment in, Tim Drake and Batwoman get the lions share of the attention in this volume, and the primary antagonist of this volume is straight out of Batwoman's series. If you have a soft spot for the 90's and 00's Batman when these characters were prominent, you will love this volume. I'm looking forward to seeing what happens next.
Read more
11 people found this helpful
Helpful
Report abuse

Jonathan David Foreman
3.0 out of 5 stars I like the idea
Reviewed in the United States on January 9, 2018
Verified Purchase
I like the idea, but in execution didn't turn out the way I had expected it to go, and the writing could have been better, I was loosing interest in the story constantly, nothing actually really caught my interest was the tragity at the end.
Read more
One person found this helpful
Helpful
Report abuse
See all reviews

MadManMarvel
5.0 out of 5 stars New Bat-Family Title
Reviewed in the United Kingdom on March 27, 2017
Verified Purchase
I tend to think the Batman corner of the New52 carried it’s weight quite well and needed less of a Rebirth than some of the other areas but even saying that – this is a refreshing and quality new direction for Detective.
Almost qualifying as a new Outsiders this grouping of some Bat-Family members is interesting, well written and engaging. The artwork is beautiful and the story well-paced and surprisingly fresh with important events occurring organically.
Batwoman gets a position here she suits and I’ve never been a fan and what occurs with Red Robin is breathtaking – and that’s before the epilogue!
Highly Recommended!
Read more
One person found this helpful
Report abuse

andrew parish
5.0 out of 5 stars Team batman
Reviewed in the United Kingdom on February 15, 2017
Verified Purchase
Detective comic's vol 1 is virtually perfect! Plenty of action, humour and drama, both the story and art are really really good. Batwoman and Red Robin (Tim Drake) steal the show and clayface provides a bit of humour. It's one of the best title's from rebirth so far, up there with superman and green arrow.
Read more
2 people found this helpful
Report abuse

Oswald Cobblepot
4.0 out of 5 stars Comic at its best
Reviewed in the United Kingdom on August 14, 2018
Verified Purchase
A great comic with lots of twists and turns. Not a lot of time is spent with certain characters which is a bit of a let down as it makes their presence almost pointless, but overall the story, art, and final scenes make it a worthwhile journey to follow.
Read more
One person found this helpful
Report abuse