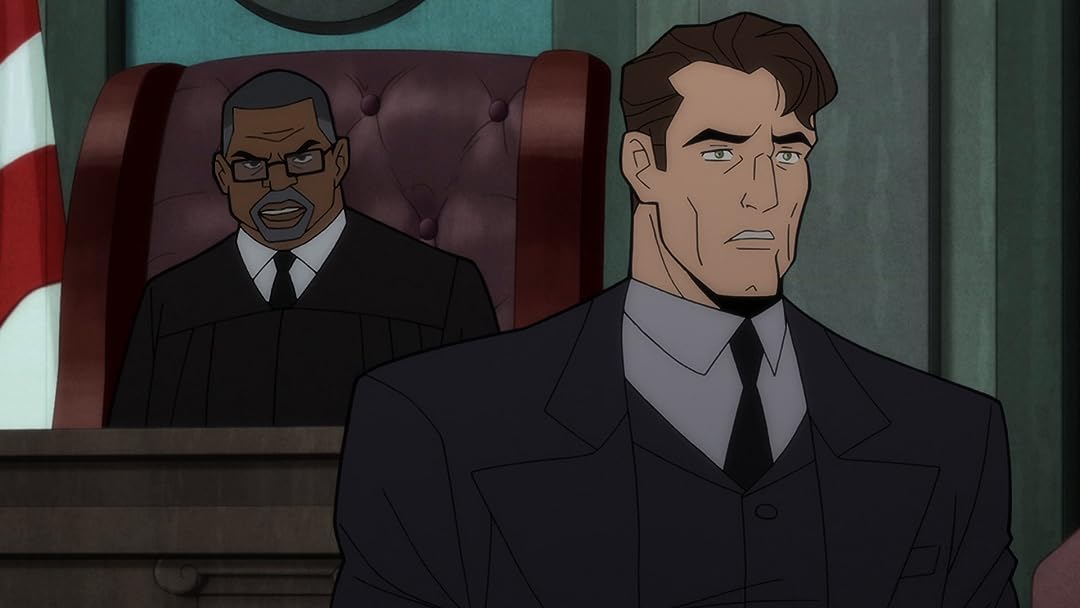 (3,823)
7.11 h 27 min2021X-RayR
Witness the dangerous clash of crime and chaos that has Batman racing the clock to uncover the mystery of the Holiday killer.

Manny AlexisReviewed in the United States on July 30, 2021
3.0 out of 5 stars
Once again, DC animation strays from the material for the worst.
Verified purchase
Finished Part Two!

The Long Halloween is probably my favorite Batman story and I re-read it maybe once or twice a year. I even bought the book three times I love it so much. That being said, I don't see myself watching DC's animated adaptation again anytime soon. Eight times out of ten they strayed from the book for the worst. Here's my issues with it.

1) No Riddler. April Fool's day was skipped. One of the most fun aspects of TLH was having Riddler being forced under duress to tell the Falcone crime family who Holiday was. I'm starting to notice a disturbing trend with the way Riddler has been handled by DC as of late. I'm legit worried with how they're gonna portray him in the upcoming "The Batman" film now.

2) Holiday's identity and motivation. I feared that they may have painted themselves in a corner in part one with a major change they made from the books and I was right to be worried. Not only is one of my favorite Batman moments ever was negated due to this, not only can they not do "Dark Victory", but the motivations of Holiday has changed and we're given a dialogue heavy exposition at the end instead of a more subtle ending that's open for interpretation. Here they want you to know WHO and WHY. I guess that's because they messed up in part one?

3) Batman's kind of an idiot. Sucks at detective work, sucks at crime fighting (needs Catwoman's help constantly), and he lets a murderer walk free? WHAT?! I get it that this might be his Year Two or Three as Batman but he wasn't this green.

4) Batman isn't good at protecting his identity. Takes off his mask in Crime Alley, Catwoman knows he's Bruce, Alberto found out (through Catwoman 🤦🏻‍♂️), and Carmine knew too? It's sorta interesting that Carmine knew but i'm mixed at the moment. Gonna have to rewatch to see if that was always the case.

There was some things I liked though.

Voice acting was great!
Animation was beautiful.
It was cool seeing how all the villains got into Falcone's compound.
Two-Face was handled well (didn't care for the different origin of the coin)

The ClockReviewed in the United States on July 28, 2021
5.0 out of 5 stars
Great Batman story
Verified purchase
In general the DC animated works are superior to the live action ones, and thanks to a legacy of Bruce Timm's Batman: The Animated Series, the Batman animated films tend to be the best of all. Lately, though, we have seen a few less than stellar films in this regard. Fortunately The Long Halloween Parts 1 and 2 do not disappoint. The writing, artwork, voice acting, and music are all up to standard here. I am not familiar with the comic book this particular story is adapted from, so I cannot vouch for its faithfulness, but as a film it works very well. I hope to see more from the team behind this outing. Also, before I forget, make sure you watch to the end of the credits, if for no other reason than the music is so good. ;-)
10 people found this helpful

The film comes to a good conclusion that faithfully adapts the plot of Loeb and Sale’s story with minimal changes. The animated style is somewhere between Sale’s distinctive style and that of “Batman: The Animated Series.” It also features a post-credits scene that links it to the DC Rebirth animated universe, which so far consists of “Superman: Man of Tomorrow” and “Justice Society: World War II.” In this, these films go beyond the pre-existing DC Animated Universe that largely consisted of interconnected television series from 1992–2006 or the DC Animated Movie Universe consisting of 16 animated films from 2013–2020 that were inspired by the New 52 continuity. Bonus features on this Blu-ray set include the DC Showcase short “Blue Beetle,” a sneak peak at the upcoming animated movie “Injustice” and two cartoons from the DC Vault: “Two-Face” parts 1 and 2 from “Batman: The Animated Series.”
7 people found this helpful

robert yamaichiReviewed in the United States on July 29, 2021
1.0 out of 5 stars
Dc forgot what made batman special
Verified purchase
First thing is amazon streaming is much better than xbox amazon has no bugs... which is cool. That being said i bought this movie to see batman be batman... be a detective, fight etc.... not to be constantly saved by secondary stronger characters that are better at everything. Then batman does something at the end that is totally out of character if dc keeps doing this they will lose their fans. Im not to hopeful for the future of the brand if this is what they are doing to their characters. I wish i could get my money and time back. I want to be entertained. This was not entertainment. This was a
character catastrophe and a lecture
11 people found this helpful

Amazon CustomerReviewed in the United States on July 27, 2021
5.0 out of 5 stars
great change to the story
Verified purchase
I thought that the film adaptation would give a definitive culprit for batman to discover, but the heart felt way it delivered that final moment was so rewarding. DC animation at it's best.
9 people found this helpful

Sunny M WhiteReviewed in the United States on August 17, 2021
1.0 out of 5 stars
What happened to the great writing
Verified purchase
This product was supposed to of been used for entertaining the first part was bad enough it was long it was stupidly written the dialogue was lousy and then I was able to figure out who the culprit was the holiday within the first 10 minutes and the more that the film went on or I should say drug on part one the more absurd it became

Paul HackettReviewed in the United States on July 31, 2021
1.0 out of 5 stars
That was just bad.
Verified purchase
Batman gets owned through out both of these movies. He does stuff out of character. This movie was just depressing. I wish I'd never watched it.
6 people found this helpful

PJ ArtsReviewed in the United States on September 8, 2021
3.0 out of 5 stars
Honors the source material; but suffers from poor animation and indifferent voice acting
Verified purchase
Not a lot to add to the title.
As with part One, the comic-book 'style' is a poor gimmick: no nuance, all jumpy and stilted. Animation is supposed to bring comic books to 'life'. This does the opposite.

Worse is the incredibly disinterested, monotone and emotionless voice 'acting'. Its like being in the middle of a wake, where everything is sotto voce and hushed.

Worth watching...but, no more than once. Again, DC has abandoned their spectacular animated heritage (going back to the every day cartoon 'Batman The Animated Series'), and has no idea who or what they are any more.
One person found this helpful
See all reviews
Back to top
Get to Know Us
Make Money with Us
Amazon Payment Products
Let Us Help You
EnglishChoose a language for shopping. United StatesChoose a country/region for shopping.
© 1996-2022, Amazon.com, Inc. or its affiliates