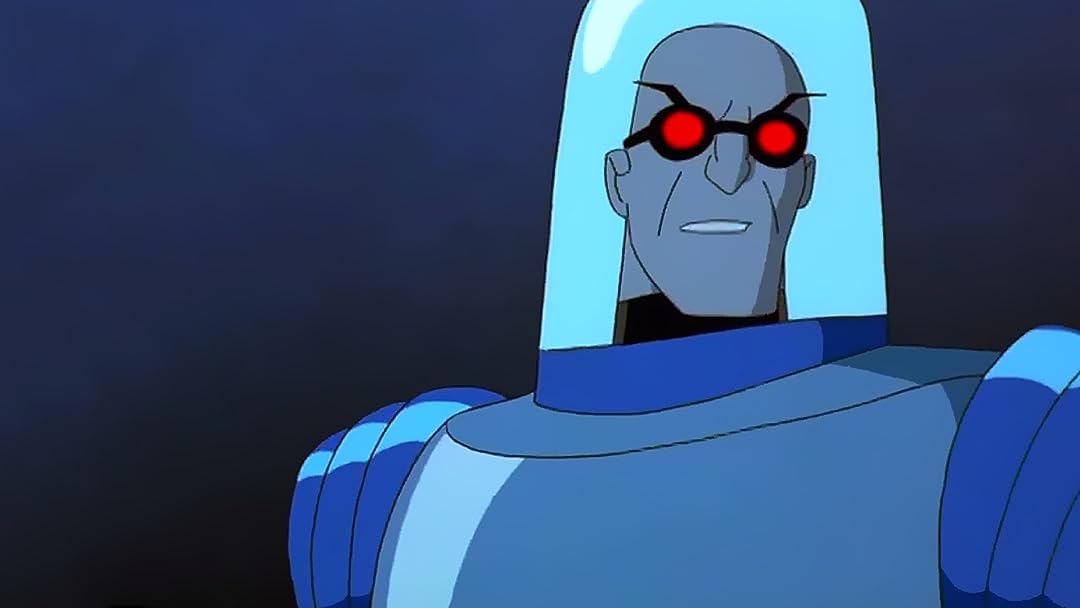 (1,508)
7.11 h 6 min1998X-RayALL
In this electrifying animated adventure, the caped crusaders, Batman and Robin, sweep into action in a desperate race against the clock to rescue Batgirl from Mr. Freeze's icy clutches.

Dougie BReviewed in the United States on March 29, 2018
4.0 out of 5 stars
Great Blu-Ray transfer and extras
Verified purchase
I was really surprised how well the hi-def picture was for for a 1997 straight-to-VHS movie. This looks MUCH better than the Mask of the Phantasm Blu-Ray.

The movie itself is good, but doesn't feel as "theatrical" as some of the other Batman animated movies. It's more or less an extended episode, and in a way serves as a decent finale for the original Batman: The Animated Series.

The best part of this disc is that they include ALL of the Mr. Freeze appearances from Batman: The Animated Series, The New Batman Adventures, and Batman Beyond, with a guide on the back giving you a watch order. These episodes are in standard-def, but still look better than the DVD's they released a while back. There are some really cheesy early-2000's DVD extras included that are almost laughable at this point, but its nice they included them for the sake of completeness.

Overall, a recommended buy on Blu-Ray, even if you already own the DVD.

Amazon CustomerReviewed in the United States on April 27, 2021
5.0 out of 5 stars
Two Great Movies from My Childhood
Verified purchase
Sub-Zero is really a two part episode from Batman: The Animated Series from the 90s which focus alot on Barbara Gordon and one of the underrated complex villians of the Batman universe Mr. Freeze who steals what he needs in order to save his beloved wife's life who suffers from a rare disease. This was one of my favorite episode as a kid because it focus on Batgirl and I like how Dick and Barbara date and fight crime as civilians and also as their alter egos. One of my favorite scene was the date scene when Dick fights off Mr. Freeze's minions trying to kidnap Barbara and tries to chase them down on the bike scene. I miss the cool action scenes in the cartoons from the 80s and 90s. It was a great story.

However, I really purchased this DVD for one of my favorite Batman movies Mask of the Phantasm. This is both a masked crusader movie and an origin Batman movie. It focus on the relationship of Bruce and his former flame Andrea. The one woman he would have given up his cape to marry. The movie perfectly blends the past and present day. Even though it's an animated movie, the issues were adult and it treated the fans with intelligent. The score was stunning. Animation beautifully drawn. The backdrop of Gotham City gorgeous. This was the first animated Batman movies and it was a masterpiece.

Some of my favorite scenes were the cute meeting between Bruce and Andrea, Bruce fighting off thieves from stealing and when he leaps on top of that motorcycle to punch the bad guy. Bruce's inner conflict of wanting to avenge his parents but still wanting to live a normal life. The two timer old timer scene with the Joker or the love scene between Andrea and Bruce. This movie had so many awesome scenes I still relish from my childhood to adulthood.

One of the best movies period with an ill fated love and bittersweet but poignant ending and an amazing score and soundtrack capturing the feel of the movie. If you love The Dark Knight, this is among the best Masked Detective stories
2 people found this helpful

George MaharisReviewed in the United States on May 13, 2018
5.0 out of 5 stars
Loving these remasters!
Verified purchase
I have been waiting for WB to remaster these classics for years and now they're finally here! The first one they released was Mask of the Phantasm, probably the second greatest Batman feature film of all time (after Dark Knight, obviously) and now we have Sub Zero. The rest of the Animated Series is due later this year.

But about this one in particular, I have to admit that when I first saw it 20 years ago I wasn't impressed, possibly due to the terrible impression Batman and Robin had left upon the world, Schwarzenegger's performance in particular. And it honestly doesn't even come close to the greatness of Mask of the Phantasm, but that movie is truly special to me.

Maybe it's the fact that it looks so pretty now thanks to the remaster, and that it's been a long time since I first watched it, but I really enjoyed this movie. It feels like some of the better episodes of the Animated Series, like it could have been a great 3-parter on the show had they not gone the feature route.

Batman is always awesome but Robin, Batgirl, and Freeze are all written extremely well and have a lot to do in this movie. I highly recommend the blu ray version if you don't already own the dvd. And if you do own it already, I would say sell the dvd or give it away and upgrade. It's worth it and it will give WB more incentive to keep producing high quality remasters of this classsic series.
7 people found this helpful

Anybody Listening .netReviewed in the United States on May 15, 2017
5.0 out of 5 stars
A Chilling Look at Mr. Freeze and the Power of Humanity
Verified purchase
As a lifelong Batman fanatic, and someone who watched the Animated Series, you can imagine my surprise that I didn't know this movie existed before a few weeks ago. With the film move 15 years old at this point, I went into it expecting the style of the Animated Series, but had tempered expectations, given how far Batman storytelling has progressed on-film with the Nolan trilogy. I am thrilled to say those hesitant thoughts were unnecessary -- this was an incredible animated story.

I won't bother going into the plot details -- this movie has been around long enough. But it maintains a fresh and timeless quality to it with central themes of good vs. evil, love, and how far people will go to help someone. And as the title and cover suggest, you get a good look at Mr. Freeze, and elements of his psyche. The animation is very much the same as the Animated Series, and dates it back just slightly, but not enough to take away from the sheer excellence of this Batman and Robin (and Batgirl) adventure.
12 people found this helpful

Frank RebholzReviewed in the United States on September 6, 2019
4.0 out of 5 stars
Better than Phantasm. Period.
Verified purchase
Compared to Mask of the Phantasm, I find this more justified as the higher praise only with one main reason. I mainly like the main characters and their motivations! My favorite is Mr.Freeze himself. I don’t find him as purely an antagonist, but more a antihero after losing his wife. His reasons are just, but how he achieves them is reckless thinking. Even Barbra Gordon is aware of it. Bruce is also better because he has sympathy for Freeze and his wife’s condition and by the end it is heartwarming conclusion. This felt like an actual film though it did have transitions of just black until moving on the next scene. Animation is like the tv series but don't expect it to be groundbreaking.This turned my off the most about it. Overall, check this out over Phantasm. You will not be disappointed!
2 people found this helpful

Patrick FoleyReviewed in the United States on August 28, 2019
1.0 out of 5 stars
double sided disk :-(
Verified purchase
I bought this assuming that both films fit on one side of a disk. I was wrong, it's a double sided disk. It would have been tolerable, but the image quality was grainy. I have DVD's from 1970's shows that have better image quality than this disk. It was not worth the price I paid. It might be good for a kid who doesn't know any better. I would recommend either streaming over this or a paying the extra for blu-ray as I will be doing shortly.
3 people found this helpful

The transfer is really clean and looks great. Totally recommend to any Batman fan.
8 people found this helpful

starsurferReviewed in the United States on August 10, 2019
2.0 out of 5 stars
Not the best offering of the animated universe
Verified purchase
What a bait-n-switch title! Sure, Batman is in the movie . . . but for maybe 15% of the run time and if you add up the screen time shared with Mr. Freeze that percentage acts like the temperature in Nova Scotia at 6:00 pm in January: it takes a serious nose dive. Better or more apt titles would be: Batgirl and Mr. Freeze, Mr. Freeze: Polar Bear Express, Mr. Freeze Ice Blocks Robin, Mr. Freeze & Internal Organs on Ice, & One Thing Leads to Another (But for No Apparent Reason). The music is also quite the bait-n-switch. Sure, there’s jazz . . . but (except for a close up of a black drummer’s hands and, I believe, one dancing party goer) not a black person in sight.
One person found this helpful
See all reviews
Back to top
Get to Know Us
Make Money with Us
Amazon Payment Products
Let Us Help You
EnglishChoose a language for shopping. United StatesChoose a country/region for shopping.
© 1996-2022, Amazon.com, Inc. or its affiliates