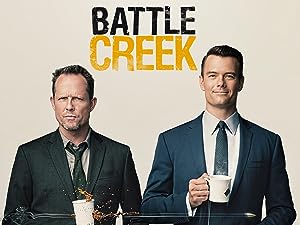 Season 1
(357)
7.32015X-Ray13+
Battle Creek stars Josh Duhamel and Dean Winters in a drama about two mismatched law enforcement officers whose polar opposite views of the world and crime-solving breed frustration, disdain, humor and possibly a grudging respect as they clean up the hardscrabble streets of Battle Creek, Mich.

KMLReviewed in the United States on March 19, 2015
4.0 out of 5 stars
Refreshing humor, Interesting Twist on Cop Drama...
Verified purchase
I am quite surprised by how much this show is growing on me. There is lots of subtle humor, and some out and out belly laughs--like when trying to take down a bad guy, and their tasers malfunction--I actually laughed out loud. By the third episode you are starting to understand the two main characters, and more fully understand the secrets and implications behind the charismatic FBI agent. Lots of tongue in cheek humor about the weather in Battlecreek, the limited department resources, etc. I find it very entertaining. The crime stories are interesting, but the subplot often takes center stage. Give it three episodes to worm its way into your heart, and see if you don't agree.
11 people found this helpful

RobinReviewed in the United States on June 12, 2015
5.0 out of 5 stars
Mystery, interesting story plots, growing characters,incredible romance----OF COURSE--CANCELLED!!!!!!!!!!!
Verified purchase
What talented writers and then the perfect cast! Who in the world made the decision to cancel this show?!! Finally a show with interesting, albeit a little, perhaps unique characters, but that is exactly why I couldn't wait for the next episode. Russ Agnew --love, love that guy!!!! He is just himself-no false pretense or worry about what those around him thinks. He has incredible loyalty to his co-workers--and the play between him and Holly--WOW! How magical to see this tough detective at end of the Stockholm episode be in such pain when Holly stepped in front of him and her hair and body brushed against him!!! And then the end of The Hand Off episode when Holly finally took things in her own hands--no nudity just plain old passion!!!!! I can't imagine anyone besides Dean Winters playing him.. This role was made for him! His mannerisms, his voice, timing of his humor! The interaction between Russ and MIlt is wonderful. Josh is such a good actor--he is good in everything I've seen him in! The real surprise here has been Dean though, The rest of the cast is so diversified--they are delightful! Be smart-- bring back this series--on some station, in some form -- a mini series or movie, but hopefully a regular series! A confused fan--Robin
13 people found this helpful

jenmoocatReviewed in the United States on March 22, 2015
4.0 out of 5 stars
Looking forward for more
Verified purchase
I liked this show a lot more than I expected. Saw episodes 1-3 and like how the characters are developing. No one is straightforward, they all have depth that is slowly coming out. Elementary is another show that does that very well.

There have been, however, a few hugely jarring moments, when the writers took something in the wrong direction for no reason: completely outfitting a maple sugar shack rather than just buying some barrels of syrup? Why? Didn't add to the plot and was just a needle-scratch.

Hope that there are fewer of those as the season progresses.

A. D. WilkersonReviewed in the United States on May 30, 2015
5.0 out of 5 stars
I loved this show
Verified purchase
I loved this show. Maybe you have to be from the Midwest. I'm sorry it was cancelled. Duhamel and Winters were perfect counterparts, one the perfect FBI agent who could do no wrong and the other the worn down small town detective who never gets a break. The show was funny and made you care about the characters while telling a good story. This is like Firefly -- they didn't give it a chance to build the audience and we all lose because of it.
6 people found this helpful

LindinvaReviewed in the United States on October 22, 2015
5.0 out of 5 stars
Great episode
Verified purchase
My husband and I started watching our recorded copy of this episode and realized that we did not have the ending because of a delayed start to the program. This was an epic addition to the story of one of the principal characters and had a great guest appearance by Candace Bergen. Although we don't usually buy single TV programs, it was worth the price to see the end of this episode. We are big fans of Battle Creek and hope that it returns for another season (or more!).

H. DrummondReviewed in the United States on March 19, 2015
5.0 out of 5 stars
Just what I've been waiting for - Dean Winter owns this dramedy.
Verified purchase
I find this series to be thoroughly and maddeningly funny. I loved Dean Winter's performances from OZ, Law and Order SVU, and Rescue Me to his stint as the casualty accident waiting to happen on his stint as shill for that insurance company. Then casting him against someone as milquetoast as like Josh Duhamel was brilliant. It's like handing a great comic actor a sack of ping pong balls to toss against a wall. Not every joke will land but a least they bounce.
2 people found this helpful