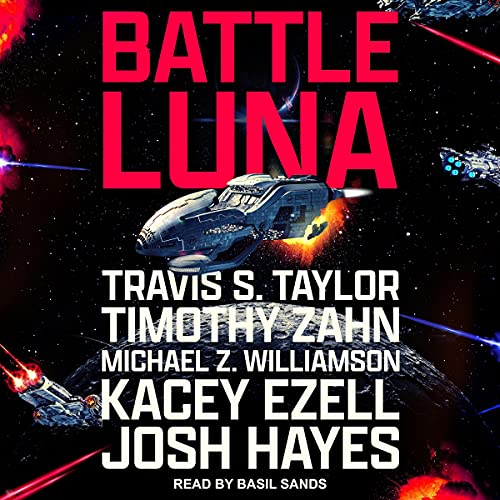 The epic fight for independence on our moon has begun!

The Lunar colony is a mining colony with only internal security capabilities. Nobody had even considered that there might soon arise a need to defend the colony from the Earth! But that day has come. Something has been uncovered on the moon. Something important. Something...alien.

The Lunar colonists perceive this great discovery as their own. Finders keepers and possession being nine-tenths of the law is how things are on the moon. But as far as the governments of the Earth are concerned, they paid for everything on the moon, so it belongs to them.

There is only one solution: Turn Luna into a battlefield!

4.5 out of 5 stars
4.5 out of 5
117 global ratings
How are ratings calculated?
To calculate the overall star rating and percentage breakdown by star, we don’t use a simple average. Instead, our system considers things like how recent a review is and if the reviewer bought the item on Amazon. It also analyzes reviews to verify trustworthiness.
Top reviews

William Denton
5.0 out of 5 stars This anthology of lunar invasion is like great musicians riffing on a theme!
Reviewed in the United States on July 28, 2020
Verified Purchase
KC's moondog was my favorite, but each story was gripping. Travis Taylor has three stories in here. I was thinking after each story - THIS is my favorite. What an awesome display of Talent -Zahn, Mad Mike Williamson, KC, Travis S Taylor, Josh Hayes!
Read more
3 people found this helpful
Helpful
Report abuse

Kindle Customer
5.0 out of 5 stars Extremely good read!
Reviewed in the United States on September 28, 2020
Verified Purchase
Very good read! I love the practical and believable way in which things developed, and worked out. The characters are good, and believable in every way. You will not regret getting this, or any Michael Z. Williamson book!
Read more
One person found this helpful
Helpful
Report abuse

Harlan Rubottom
5.0 out of 5 stars Well thought out,
Reviewed in the United States on July 12, 2020
Verified Purchase
Always liked books about the moon settlers particularly when they involve revolution. I enjoyed the different perspectives each author brought to light and the varied characters additions to the story.
Read more
One person found this helpful
Helpful
Report abuse

Kindle Customer
3.0 out of 5 stars Would be 4 stars but...
Reviewed in the United States on May 1, 2021
Verified Purchase
This started off well, but quickly fell off a cliff at the end. Not sure if it was the different authors or what, what the set up by Zahn was good as were the following 2 or 3 chapters after, in setting up the plot and the stakes. But the couple middle chapters did nothing for the plot, and the very last chapter was way too rushed to give a satisfying conclusion. Also with no post-battle wrap up, there was a lot I was left wanting.
Read more
Helpful
Report abuse

G. Jacobs
5.0 out of 5 stars Outstanding Collection!
Reviewed in the United States on August 5, 2020
Verified Purchase
Every story adds to a plausible tale of what war would look like on the moon. It's also nice to see the clever engineer as the hero again!
Read more
One person found this helpful
Helpful
Report abuse

Maus
5.0 out of 5 stars Great book
Reviewed in the United States on May 29, 2021
Verified Purchase
Great authors wrote excellent stories for this book. I thought the stories well thought out and moved along to an excellent ending.
Read more
Helpful
Report abuse

Kindle Customer
4.0 out of 5 stars Interesting near future sci fi with novellas/shorts from well known authors but very pricey ebook
Reviewed in the United States on August 3, 2020
Verified Purchase
Well written, well edited, well ebooked from a book factory but you can buy two really good author-issued ebooks for the price of this book. <sigh!>
Read more
Helpful
Report abuse
See all reviews

Scott Osmond
4.0 out of 5 stars The Moon Fights For Liberty
Reviewed in Australia on September 7, 2021
Verified Purchase
This was a good collection of stories from some of sf's best writers. What I liked was that even without "weapons" the moon dwelers were able to improvise defences by using tools, chemistry and the conditions on the moon to achieve victory. We didn't get a post conflict epilogue so we don't learn how things played out. I'm hoping that this means a follow-on collection.
Read more
Report abuse
See all reviews
Back to top
Get to Know Us
Make Money with Us
Amazon Payment Products
Let Us Help You
EnglishChoose a language for shopping. United StatesChoose a country/region for shopping.
© 1996-2021, Amazon.com, Inc. or its affiliates