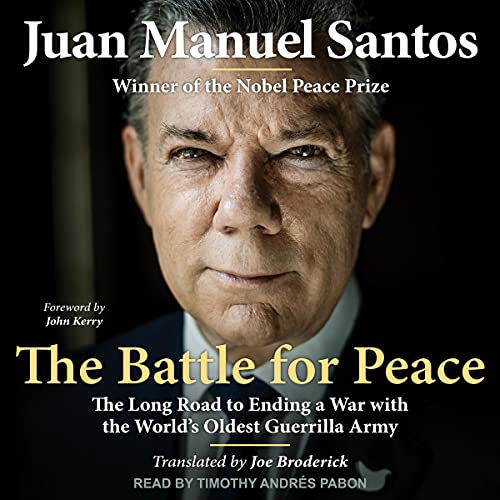 The Battle for Peace: The Long Road to Ending a War with the World's Oldest Guerrilla Army

This is the comprehensive account of the long and difficult road traveled to end the 50-year armed conflict with the FARC, the oldest guerrilla army in the world; a long war that left more than eight million victims. The obstacles to peace were both large and dangerous. All previous attempts to negotiate with the FARC had failed, creating an environment where differences were irreconcilable and political will was scarce. The Battle for Peace is the story not only of the six years of negotiation and the peace process that transformed a country, its secret contacts, its international implications, and difficulties and achievements, but also of the two previous decades in which Colombia oscillated between warlike confrontation and negotiated solution.

In The Battle for Peace, Juan Manuel Santos shares the lessons he learned about war and peace and how to build a successful negotiation process in the context of a nation which had all but resigned itself to war and the complexities of 21st-century international law and diplomacy. While Santos is clear that there is no handbook for making peace, he offers conflict-tested guidance on the critical parameters, conditions, and principles as well as rich detail on the innovations that made it possible for his nation to find common ground and a just solution.

Ricky S
5.0 out of 5 stars Great historical account of peace being made
Reviewed in the United Kingdom on October 30, 2021
Verified Purchase
Lovely, easy to read book about the complexities of making peace in the 21st century
Read more
Report abuse
See all reviews
Back to top
Get to Know Us
Make Money with Us
Amazon Payment Products
Let Us Help You
EnglishChoose a language for shopping. United StatesChoose a country/region for shopping.
© 1996-2021, Amazon.com, Inc. or its affiliates