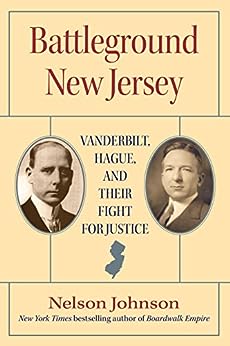 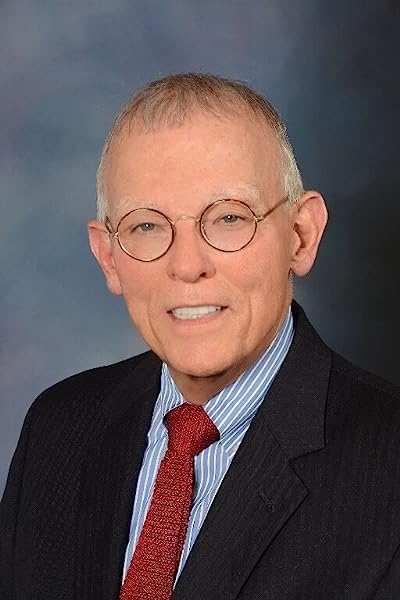 by Nelson Johnson (Author) Format: Kindle Edition
Part of: Rivergate Regionals Collection (18 books)
See all formats and editions
Sorry, there was a problem loading this page. Try again.
New Jersey’s legal system was plagued with injustices from the time the system was established through the mid-twentieth century. In Battleground New Jersey, historian and author of Boardwalk Empire, Nelson Johnson chronicles reforms to the system through the dramatic stories of Arthur T. Vanderbilt—the first chief justice of the state’s modern-era Supreme Court—and Frank Hague—legendary mayor of Jersey City. Two of the most powerful politicians in twentieth-century America, Vanderbilt and Hague clashed on matters of public policy and over the need to reform New Jersey’s antiquated and corrupt court system. Their battles made headlines and eventually led to legal reform, transforming New Jersey’s court system into one of the most highly regarded in America.

Vanderbilt’s power came through mastering the law, serving as dean of New York University Law School, preaching court reform as president of the American Bar Association, and organizing suburban voters before other politicians recognized their importance. Hague, a remarkably successful sixth-grade dropout, amassed his power by exploiting people’s foibles, crushing his rivals, accumulating a fortune through extortion, subverting the law, and taking care of business in his own backyard. They were different ethnically, culturally, and temperamentally, but they shared the goals of power.

"Breaking new ground, Nelson Johnson gives a colorful account of the relationship between Frank Hague and Arthur Vanderbilt, leading to the adoption of the 1947 N.J. Constitution. This is a good read and an important book for anyone interested in N.J. history." -- Governor Thomas H. Kean

"Nelson Johnson’s Battleground New Jersey takes a fresh look at the personal and political forces that brought the New Jersey Court system from a hodgepodge of ancient rules and 'Dickensian absurdity' to what ultimately became a judicial model envied throughout the country. The book is a compelling narrative that both illuminates and entertains." -- Hon. L. Anthony Gibson, J.S.C. (Ret.)

"Nelson Johnson’s new book is a must for anyone interested not only in two of the most important New Jersey political actors in 20th century New Jersey (including new information on Arthur Vanderbilt) but also in the formative political events in those years that still affect us today."

"Battleground New Jersey is an enjoyable romp through an important era about which most people know little. Nelson Johnson brings to life people and events for which we have, at best, a hazy image. His balanced presentation of the two principals, Arthur Vanderbilt and Frank Hague—conflicting in character as they are—is a reflection of his thorough research."

"Johnson...disproves the theory that a book about the judiciary can't be crackling good." ― New York Law Journal --This text refers to the hardcover edition.

NELSON JOHNSON is best known for his award-winning New York Times bestseller, Boardwalk Empire: The Birth, High Times, and Corruption of Atlantic City, which inspired the HBO series, and most recently Northside: African Americans and the Creation of Atlantic City.   --This text refers to the hardcover edition.

Nelson Johnson is the author of the award-winning book and acclaimed HBO series of the same name, Boardwalk Empire. Johnson’s other books include The Northside: African Americans and the Creation of Atlantic City and Battleground New Jersey: Vanderbilt, Hague, and Their Fight for Justice. Prior to his retirement in 2018, Johnson worked as a lawyer for more than thirty years and was eventually appointed to the position of Superior Court Judge for the state of New Jersey. Johnson currently lives in Hammonton, New Jersey, with his family.

Lyric
5.0 out of 5 stars Adversaries who left a lasting imprint on New Jersey
Reviewed in the United States on January 7, 2015
Verified Purchase
This book by Judge Nelson Johnson, the author of "Boardwalk Empire," details the political battles in the first half of the 20th Century for control of the state of New Jersey. The protagonists are Arthur Vanderbilt, a very accomplished lawyer, law professor and ultimately the Chief Justice of the New Jersey Supreme Court and a major figure in the state Republican Party and his antagonist Frank Hague, a self-made man and long-time mayor of Jersey City who controlled the Democratic Party. Though the two men were from adjoining counties in northern New Jersey, they were light years apart in almost every way.
Johnson expertly weaves his way through their personal stories and also the political and judicial histories of the state during those years. The book is a well-researched history of their battles for control of the governorship and numerous state and local races and it is also the story of Vanderbilt’s long-running campaign to reform the extremely antiquated and corrupt New Jersey judicial system.
This is an outstanding history of a crucial period in New Jersey's history and should be read by anyone interested in learning about the past politics of New Jersey and how it impacts the politics and judicial system of New Jersey today.
Anyone interested in history, politics, and the law and the people who were at the center of them will enjoy this book.
Read more
Helpful
Report abuse

jeff horn
5.0 out of 5 stars Arthur Vanderbilt - a Hero to Efficient Justice
Reviewed in the United States on March 8, 2021
Verified Purchase
Judge Nelson Johnson narrates the clash of crooked old time NJ politics with the forces of T Rooseveltian Reform. Hague is the street fighter and Vanderbilt is long-game reformer. Hague won many battles, but Vanderbilt won and became NJ's first "real Chief Justice. Johnson takes the reader back to the 1930's - 1940's and gives you a courtside seat.
Read more
Helpful
Report abuse

Donald M. Karp my rview of fRank should be 5 stars.
3.0 out of 5 stars Three Stars
Reviewed in the United States on June 4, 2015
Verified Purchase
ok but should have gone intoner detail
Read more
Helpful
Report abuse

Steve
4.0 out of 5 stars There's lots of good stuff here
Reviewed in the United States on January 12, 2015
The reform of New Jersey's formerly Byzantine legal system, framed as a clash between two outsized personalities: Arthur Vanderbilt, the oft-frustrated reformer, and Frank Hague, the Hudson County political boss who (correctly) saw any changes to the impossibly convoluted system as a threat to his power. Johnson, an Atlantic County judge, is the perfect (and perhaps only) writer to take on this complex subject, and his spadework uncovers much valuable information. If nothing else, his discoveries about Vanderbilt's role in the writing and shaping of Dayton McKean's 1940 study The Boss: The Hague Machine in Action will permanently alter the way that book is viewed. Also, Johnson's writing style is much improved from his first two books.

***Disclosure*** Nelson Johnson cites me and my book The Last Three Miles several times here. Even so, this is a significant contribution to the study of New Jersey history, and a must-read for any future writers who take on the subject of Hague and his influence.
Read more
2 people found this helpful
Helpful
Report abuse
See all reviews