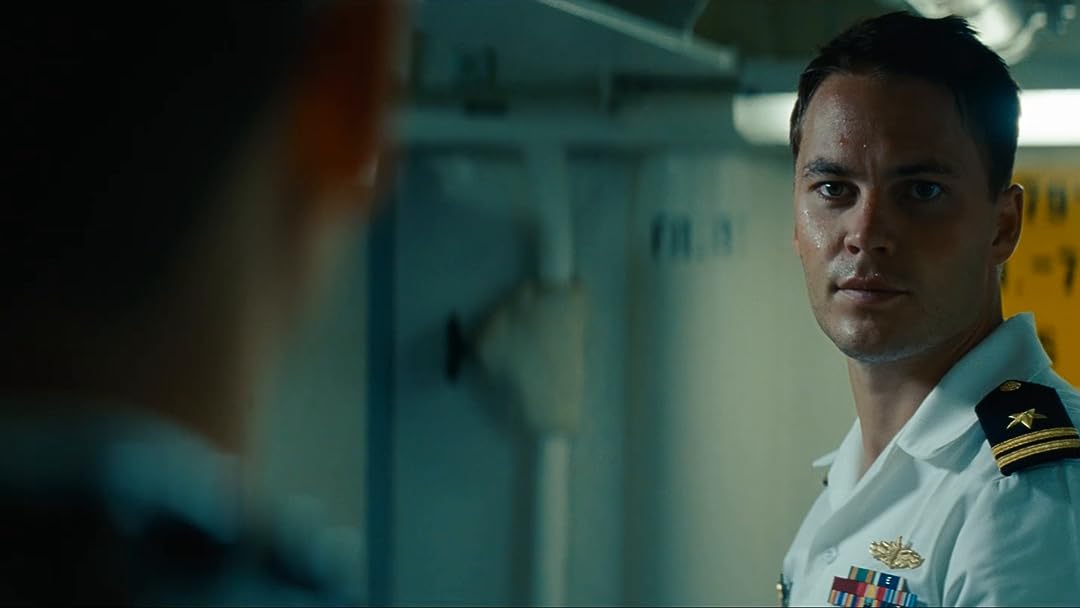 (20,041)
5.82 h 11 min2012X-RayHDRUHDPG-13
An international naval coalition becomes the world's last hope for survival as they engage a hostile alien force in this epic action-adventure. Stars Taylor Kitsch and Liam Neeson.

Leaves Prime in 4 daysRentals include 30 days to start watching this video and 48 hours to finish once started.

FreddyReviewed in the United States on April 26, 2018
5.0 out of 5 stars
I love this movie!
Verified purchase
Every time Battleship runs on cable I surf through it. I kept looking for a copy in the knock-out bin at Walmart, but never spotted one. So, I decided to just buy it on Amazon. Now I can watch it whenever I want.

It’s definitely not a movie to be taken seriously. It is eye candy, but I love the script. I have read the reviews condemning the script. Maybe these people just don’t have a sense of humor. I think the script is hilarious; and eminently quotable. The cast is perfect. Jesse Plemons is very funny as the “dumb” Boatswain’s Mate, Jimmy “Ordy” Ord (“And I kept saying, ‘This is a BAD idea.’”). Rihanna looks great and is a treat to watch. Taylor Kitsch does a great job as do, Gregory “Right Now You Are Going To ACQUIRE That Courage, OR……” Gadson and Tadanobu “Dat book is Chinese. My way is better” Asano. I love John Tui as Chief Petty Office Walter “the Beast” Lynch. Hamish “It’s down THERE, in that NEST of ALIENS.” Linklater plays his part perfectly as the nerdy astrophysicist.

Although the movie starts off a little slowly, it is necessary to set up the main characters. Once moving, there is plenty of fun action. There is a lot to recommend this movie when it comes to light sci-fi viewing. The sound track is very good IMO, too.
“Battleship” is also a bit of a recruiting advertisement for the U.S. Navy (but that isn’t a terrible thing).

If you can maintain a bit of a sense of humor, watch it! I think you’ll like it.

Howard FerstlerReviewed in the United States on January 21, 2019
4.0 out of 5 stars
Not hard science, just escapist fun
Verified purchase
I had the DVD before, and upgraded to 4K. Yeah, I maybe should have known better (I am an old man and a military veteran as well), but I wanted to see 4K, HDR, and DTS:X pushed to their limits. They were. As for the movie itself, well, it was often inane, but also often loaded with what any 15-year-old would want. (I may be old, but I still remember when I was 15, and back then I would have loved this movie.) I am also a sucker for alien-invasion movies, at least if our side wins! However, the movie did have two rather blatant flaws that I chose to ignore, but which were still significant. First, there is no way a goofball with an arrest record (earned right near the beginning) could get into the US Navy, and especially into the US Navy as an officer. Sheesh. Second, there is no way an anchor snagging on anything on the shallow area of the ocean bottom could yank around a ship as massive as the Missouri. The chain would have snapped or ripped out of its mounts, or the object snagged would have torn loose, and the ship would have proceeded along in the same direction. Still, it looked cool, and I am glad the goofball turned into a leader.
36 people found this helpful

Richard Clapp jrReviewed in the United States on December 26, 2016
5.0 out of 5 stars
Loads of Fun with a nice Old School music score (think ACDC)
Verified purchase
Ah! Old School music (Lots of ACDC) Lots of action, no trash talk. This movie is just plain escapist fun. The kids loved it, I loved it. The only Real game elements are the shape of the explosives and the Tidal Buoys scenes. But even that was well done. The movie was a bit inventive for alien design and how they react to conditions. Nice attention to detail. Glad to see they used some real crew from the Missouri. Those guys gave a lot during WW II and after. Glad to see them get the screen time, instead of only extras. All in All, the movie was just plain FUN.
57 people found this helpful

Quentin MendozaReviewed in the United States on May 10, 2017
5.0 out of 5 stars
So bad, it's good
Verified purchase
I'm not going to lie; this movie is totally idiotic, but that's what makes is so fantastic. The premise is absurd, the dialog is cheesy, and the acting is one dimensional. The part near the end where the WWII veterans step up to help fight the aliens? I feel totally manipulated, but I still get a knot in my throat every time. It just doesn't add why I like this movie so much. Maybe it's all the naval protocol; maybe it's the music; maybe it's the way that battleship rains down hell on the invaders. I don't know, and I don't care. It's campy genius, which is why I bought the movie.
45 people found this helpful

Adam WoodReviewed in the United States on July 22, 2018
5.0 out of 5 stars
A great summertime action movie with cool visual and outstanding audio
Verified purchase
I bought this in 4K for the DTS;X soundtrack, and it doesn't disappoint! As a fairly mindless action movie, this is a big winner. While I enjoyed it the first time, I liked it even more the second time around. There's some great action, very cool visual effects, and outstanding audio.

Despite being associated with Hasbro and the game, it really has nothing at all to do with the game Battleship, with the exception that it does indeed contain Navy ships and a battleship. There is one scene that made me think of the game, but just barely. So, if you're thinking that it's just a movie about the game, don't worry - it's not at all. It's got a pretty cool (if utterly unrealistic) premise to it and some decent characters, too.

Gopi RajaseharanReviewed in the United States on July 5, 2019
1.0 out of 5 stars
No plot; Awful dialogue; cliches will abound for mature audiences.
Verified purchase
Take a bit of the Hasbro Battleship board game, miniaturized Transformers, Liam Neeson showing up to pick up a paycheck, the singer Rihanna with weapons normally hefted by Arnold Schwarzenegger, the model Brooklyn Decker in the thankless "hot girlfriend who also happens to be a psychotherapist showing ample cleavage" role and actual wounded veterans portrayed in sometimes insensitive ways and this is what you get. Oh yeah, there were a couple of guys who played the lead and who go on to join the navy in their mid-20s.. because you know that's what you do when you don't have control over yourself and your life. You join the Navy to become responsible people. Six years later, guess what? One of them finds himself reluctantly in charge of a destroyer while the other is formally in charge of an entire convoy. Even the geeks, who can hack into any system and sometimes be funny in the process, test your patience here.

For all those reasons, I couldn't watch the movie straight through. It was neither gripping or engaging. I paused it and came back to it a couple of times hoping that it would suddenly get good. But, alas, no avail. It was awful throughout. But it was my mistake. In opting to watch this movie, I had gone by the reviews on Amazon Prime and got duped. What I should have really done is read the review of professional critics such as James Berardinelli instead, which is what I normally do. I read their reviews after finishing watching the movie and those reviews aligned well with my own thoughts. Probably all the good reviews here on Amazon Prime were either from young people from the Ozarks who have not been exposed to shoddy screenplay/dialogue or older people not used to the production values seen in spectacle movies like this. They must have been over-awed.
17 people found this helpful

Paris Tx GuyReviewed in the United States on February 2, 2020
4.0 out of 5 stars
Take it for what it is and have a fun ride
Verified purchase
I do not get all the hate for this movie. Sometimes you want to watch the Oscar winning pictures of course, but other times just have fun. This movie delivers on fun. Quit over analyzing the faults and enjoy the ride. I seriously feel energized when I am done watching this.
Spoiler alert for the idiots out there:
Why did the aliens not attack all the ships and people....stupid right? Nah...come on you so called wannabe experts. It was shown. Their planet was destroyed by a war (head grab flashback on the ship). This was a SCOUT team. Not full recourses. You pick your battles based on threats. Then you wipe out infrastructures like they did the highways and bases to eliminate more threats. This was never about dominance at this point.. Only to make sure the planet would work. Then they would get word to the main group which would have been dominance. Geesh...idiots out there that cannot comprehend The Art of War or even The 48 Laws of Power. Pick you battles wisely for your needs
8 people found this helpful

joel wingReviewed in the United States on February 13, 2021
2.0 out of 5 stars
Dumb plot Only worthwhile for watching the explosions
Verified purchase
The premise of this film is ridiculous. Humans send out messages to a planet that might be inhabited. They reply by sending a force to take over the Earth and the only thing that can stop them is an old World War II battleship hence the title of the movie. That’s enough to make a lot of people not watch. The draw is to see all the explosions and the aliens. Is that enough? I would never pay for this film. I have watched it several times when it’s free on TV for some mindless fun and that’s really about the best you can say about it.
6 people found this helpful
See all reviews
Back to top
Get to Know Us
Make Money with Us
Amazon Payment Products
Let Us Help You
EnglishChoose a language for shopping. United StatesChoose a country/region for shopping.
© 1996-2022, Amazon.com, Inc. or its affiliates