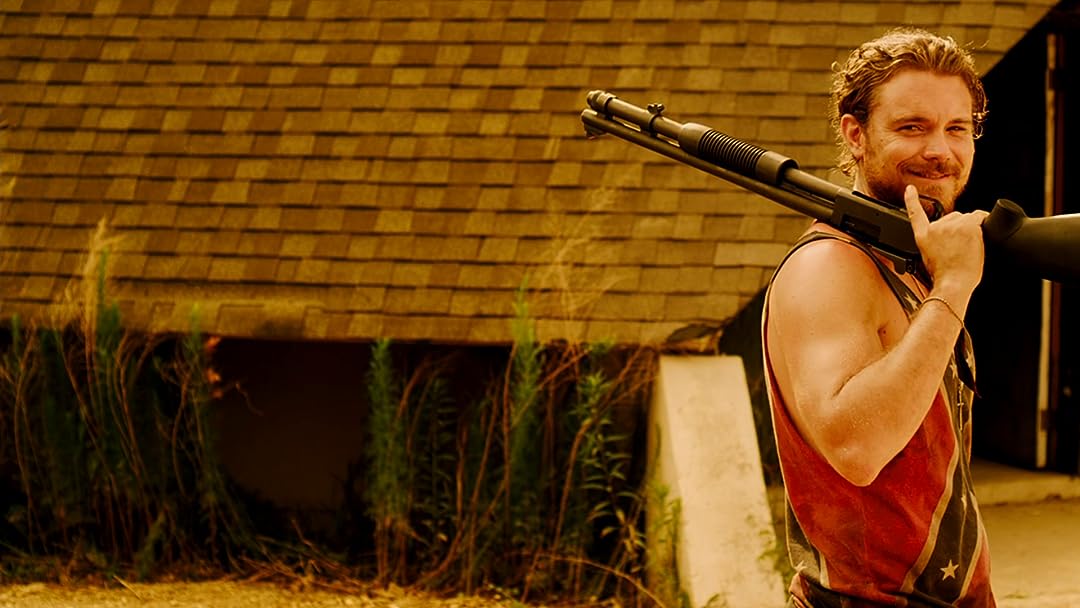 (2,215)6.41 h 38 min2014X-RayR
After her ex-husband Carlos (Thornton) shoots Celeste (Longoria) three times in the gut, it's time to play dirty. In the fight for her godson, Rob, she hires three outlawed and redneck brothers to bring him back to her. But nothing can be that simple in the South. What begins as a small rescue mission rises to a Southern battle royale.

Kara DReviewed in the United States on May 23, 2016
5.0 out of 5 stars
Do yourself a favor and watch this...
Verified purchase
Thornton and Longoria may get top billing, but the stars of this movie are four relatively unknowns-Clayne Crawford, Travis Fimmel, Daniel Cudmore, and Thomas Brodie Sangster-, two of whom never utter a single word.

It's loud, its obnoxious, it's crazy violent, and it doesn't always make sense, but this tale of three "loser" brothers, and the boy they're paid to kidnap/rescue, is one hell of a fun ride. Frankly, I'm shocked it couldn't find a distributor for a big release.

Right at the end, it probably could have used a better edit, but they fixed it, before the credits were done rolling. Even with that slight, very slight, drawback, I give it a heart thumbs up.

sefriendlyguyReviewed in the United States on February 11, 2019
4.0 out of 5 stars
A WOMENS SCORN!
Verified purchase
THIS SHOW WAS SET IN IN ALABAMA, BACK IN THE DAY, WHEN THE GOOD OLE BOYS
COULD DO WHATEVER THEY PLEASE, IN THIS CASE, THERE IS A MAN AND WOMEN THAT HAD A DISABLED CHILD IN A WHEEL CHAIR THAT COULD NOT SPEAK AND THEY ENDED UP GETTING A DIVORCE, BACK THEN
THAT MEAN KILLING ONE OR THE OTHER AND NO ONE WOULD EVER KNOW THE DIFFERENCE
NOW ALONG WITH THIS , THE HUSBAND (BILLY BOB THORNTON) WELL HE TRIED TO KILL HIS WIFE(EVA LONGORIA) AFTER THE DIVORCE, IT SEEMS ONE OF THE GUYS HE HIRED TO DO THE JOB, WELL, HE JUST THOUGHT SHE WAS DEAD AFTER HE SHOT HER 3 TIMES IN THE GUT, GUESS WHAT , SHE LIVED AND HE TOOK HIS SON ANS SHE HAD TO FIND SOMEONE TO GET HIM BACK AND SAFELY! IN THE SOUTH, NOT EVERYONE IS VERY SMART AND THIS WAS A LONG TIME AGO, NO COMPUTERS AND BIG AS CELL PHONE IN THE COUNTRY, SHE HIRES THESE THREE GUYS TO DO THE JOB AND GET HER SON BACK AND THEY GO THROUGH HELL WITH THE PEOPLE HE HIRES
THE THREE GUYS WERE RAISED BY A BLACK MAN AND HE IS THE SHERIFF OF THE GOOD OLE BOYS TOWN
NOW HE DOES WHAT HE WANTS AND GETS AWAY WITH IT AND THATS HOW HE TAUGHT HIS BOYS! YOU HAVE TO SEE THIS, ITS THE SOUTH BACK IN THE DAYS AND THIS SHOW REMINDS YOU OF IT, DRINKING ,FIGHTING AND SEX
FAMILY FIGHTS! ITS ALL IN A DAYS WORK! AT THE END OF THE SHOW, THINGS WORK OUT FOR SOMEONE,
BUT WHY SPOIL IT! IF YOU EVER WATCH THE DUKES OF HAZARD, THIS WILL REMIND YOU OF IT, THIS GUYS CARS DON'T JUMP THOUGH, BUT THE GUYS ARE GOOD AT FIGHTING THE LAW AND OTHERS TO STAY ALIVE, ALL WHILE PROTECTING THIS HANDICAPPED BOY!, THE SHOW IS FUNNY AT TIMES, IT PULLS ON YOUR HEART STRINGS AT TIMES AND MAKES YOU WONDER HOW THEY DID ALL OF THIS!!
3 people found this helpful

james m leeReviewed in the United States on May 13, 2016
5.0 out of 5 stars
Dark Funny, Funny, Very Funny Movie.
Verified purchase
An over the top action comedy about 3 redneck brothers that have been raised up by a Black sheriff to kill off the gangs and outlaws in their county in Alabama. Imagine 3 "Dexters" (psychopaths of sorts), except here Dexter is a Redneck. Too funny. There are so many stereotypes that are demolished and destroyed by this movie it should get an award. Humor is not sacrificed for Political Correctness. So many bad Action movies out there today, at least this one doesn't pretend to be something it isn't. How many action movies do we see where a single punch just happens to knock out that one guard, so the hero or heroin can pass by them. In other scenes of these bad action flicks the people will fight for seemingly hours, but when it is needed for the plot to continue--one punch-- and the inept guard is knocked out. For me that can ruin a hole movie, especially a movie that pretends to be serious and real life. The Baytown Outlaws won't disappoint like those phony bad action movies because tt embraces its pretentiousness, and thus comes off funny, dark, sensitive and at times poignant.
16 people found this helpful

GrimalkinReviewed in the United States on November 22, 2020
5.0 out of 5 stars
Why Don't They Make More Movies Like This?
Verified purchase
What a hoot and a holler was this hilarious action film, a roaring tribute to outlandish drive-in cinema of the 20th Century. Taking a poke at about every human weakness, this movie is one of the blackest comedies I've seen in years. We decided to try it due to Billy Bob Thornton, but his role as the evil X-husband was not key to our enjoyment. The three brothers (Oodie or Oodle?) were stellar in their adventures in high crime and redneck rabble rousing. The wheel chair bound Godson was also a silent treat. His rare smiles of delight brought sunshine to this very dark depiction of rural poverty laced and braced by determination and family ties.
3 people found this helpful

GosuMomReviewed in the United States on May 12, 2020
5.0 out of 5 stars
“Brick, I’m startin’ to think we shoulda finished school.”
Verified purchase
I laughed soooooooo hard at this movie!! The redneck brothers are hilarious. If you are not a native Southerner, please bear in mind that THIS level of redneck is only a SMALL percentage of the population of the South. Most Southerners are not as stupid as these guys. With that caveat said, the actors’ portrayals of the classic ignorant redneck are spot on. With actor Travis Fimmel specifically, it amazed me how authentically he portrayed McQueen Oodie. The dude is Australian but he nailed the character perfectly, right down to the protruding bottom lip from dipping snuff.

If you are easily offended, you may want to choose a different movie. This one parodies not only the rednecks, but it also smokes every possible stereotype including cops (right down to the officers battling over jurisdiction) and gangs of multiple ethnicities. And it takes jabs at quite a few movie genres and franchises, including Jean Claude vanDamme, Rambo, Rocky, Karate Kid, Road Warrior, E.T., and Slingblade, with a wicked reference to the tv show King of the Hill. My sides hurt from laughing so much at all of those!

Andre Braugher is perfect as the sheriff. His swagger. His attitude. His facial expressions. His idioms. He’s every bit as evil as Ned Beatty’s sheriff in the White Lightning/Gator McCluskey movies. And the young, hip Chicago ATF agent made me think of RDJ in U.S. Marshals – perfect teeth, hip hair, stylish suit. And Billy Bob Thornton is appropriately smarmy. I especially enjoyed his Walmart metaphor describing the drug business.

With the boys travelling from Montgomery AL to Austin TX, the highway background scenery (including the hazy sky from the high humidity) is authentic, having been filmed in Louisiana. But any Louisiana native will tell you that there are NO roads in the state as smooth as the ones the Oodies travel. LOL! And McQueen mistakenly believing the Permian basin is “on the way” is something that will elicit a knowing scoff from every Texan.

There are many characteristics about the Oodie brothers that make it evident that the writers either grew up in the backwoods South or put in an effort to do their research – the brothers constantly arguing and threatening each other with bodily harm, the brothers actually calling (and abiding by) dibs on which of them gets to pursue the pretty girl, the duct-taped gun holster, their responses to the monster truck, and their trashy old home place (the VHS tapes in the living room as well as the ancient paneling, the shotgun, and the taxidermy-preserved animals on the walls).

If you are truly country or small-town Southern, you’ll feel like you’re at a family reunion. If you’re “a Yankee,” you’ll find it either very easy or very hard to believe the stereotypes presented. Either way, I hope you catch the intended humor. I laughed so hard that I had to watch it twice.

JaredReviewed in the United States on January 21, 2018
4.0 out of 5 stars
The acting and plot was interesting throughout the whole movie. Never lost my interest.
Verified purchase
This was a good movie. I thought at first it was going to be a tarantino blood bath, but it turned out to be a sort of more straight foward movie about three guys who are low life rednecks and get a deal they can't refuse to retrieve an attractive woman's (Eva Longoria) godson. The main characters were pretty good actors and their characters were very likeable, but yet still realistic. I liked this movie a lot, it is definitely worth the time I spent watching it. Have fun and enjoy!
10 people found this helpful

Joe seoReviewed in the United States on August 31, 2021
5.0 out of 5 stars
Best film parody you haven't seen
Verified purchase
Totally stylistic, over the top good guy gangster fun done Southern Tarantino style. It's far better than the ratings on IMDB suggest, a grindhouse type of film where the good old boys are actually reformed good old boys who haven't lost the swagger. Has an excellent cast that isn't wasted, excellent production values and violence ala Tarantino but without the gruesomeness. Billy Bob Thornton is a hoot in his role as a drug kingpin baddie who is hunting down three brothers who have been hired to snatch a disabled youngster in his house that he planned to exploit. Lots of famous actors in this one, all doing great bit parts. Certainly a surprise, never boring, often amusing and not to be taken seriously. A sleeper film in a sea of really terrible movies I've seen on Amazon Prime.

Daniel T. IrwinReviewed in the United States on August 11, 2021
4.0 out of 5 stars
Funny, dark, intelligent, deeper than you'd expect..
Verified purchase
The only reason this doesn't get 5 stars is because I don't want people to think I'm exaggerating.
I really liked this movie and highly recommend it.
About 30 minutes in I realized it wasn't just a comically violent film. The dialogue is quite philosophical at times, and the Oodies have a conscience. Warped a bit, but I was rooting for them in the end.
Small budget GEM.
Longoria is a none factor. Small role.
The rest of the cast is great.
One person found this helpful
See all reviews
Back to top
Get to Know Us
Make Money with Us
Amazon Payment Products
Let Us Help You
EnglishChoose a language for shopping. United StatesChoose a country/region for shopping.
© 1996-2021, Amazon.com, Inc. or its affiliates