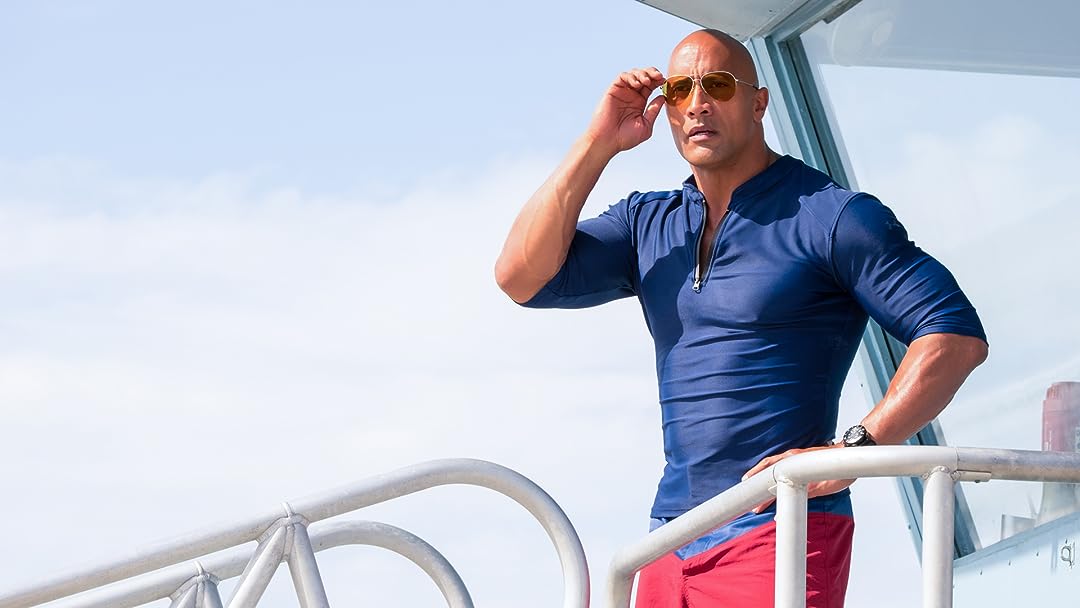 (11,239)
5.51 h 56 min2017X-RayR
When a dangerous crime wave hits the beach, the legendary Mitch Buchannon leads his elite squad of lifeguards on a mission to prove that you don't have to wear a badge to save the bay.

Brian ButzReviewed in the United States on May 15, 2018
4.0 out of 5 stars
Enjoyable trash
Verified purchase
Maybe I was in the mood for garbage, but I thoroughly enjoyed it. While the original series was family friendly Scooby Doo storied smut, this was the opposite, meaning juvenile raunchy Scooby Doo storied smut. Despite the predictable story, and crude humor, it surprisingly had some original moments of intense action. Not realistic by any means, but not bad at all. There were some good laugh out loud moments as well, and plenty of bathing suit beauties. I'll likely never see it again, and be ashamed to recommend it, but I enjoyed watching it tonight.
192 people found this helpful

Kindle Customer janetReviewed in the United States on June 13, 2018
4.0 out of 5 stars
Good for a getaway from daily life, but not for those who mind off-color language and jokes
Verified purchase
Surprisingly good. My wife and I (both in our 70's) enjoy movies with the "Rock." -- especially his comedies. This is a nice way to get away from the world for a couple of hours: good guys, really bad guys, bad attitude youngster sees the light, ocean chase scenes, good looking women and guys, etc. Yes, the language and jokes tend to be crude, but it all fits the tenor of the movie. We recommend this movie to anyone who wants to chill for a bit and doesn't mind dirty jokes and language (I've seen movies with much worse language).
45 people found this helpful

commorancyReviewed in the United States on November 7, 2018
2.0 out of 5 stars
Unnecessarily sarcastic, cynical and corny
Verified purchase
This movie remake of the popular Baywatch TV series follows the same tired spoofing formula as too many other TV shows remade into films. This Baywatch film includes too many of the same unnecessary "movie mocking" tropes, the same unfunny gags and takes the same tired cynical, sarcastic attitude towards the original TV series material as other movie remakes. Remakes such as The Brady Bunch Movie, Charlie's Angels Full Throttle, The A-Team, Dukes of Hazard, The Addams Family (which is probably the best of this bunch) and now Baywatch (just to name a few). Even the latest Star Trek from J.J. Abrams has injected some of these unnecessarily hammy, tropish, spoofing elements.

Some stupidity in this film includes... the overly stupid rookie, dressing in drag, making corny jokes about lifeguard stereotypes (and of the show itself), hamming up the body aspect, all of which is too much to bare in this farce. I don't see why any of it is necessary. It degrades the film and mocks the original TV show in the process. I don't go into TV-series-into-movie remakes to see the original TV material mocked and derided by corny jokes. I go into it to see an entertaining film that tries to relive and breathe new life into the original material through a new cast. Instead, The Brady Bunch Movie set this silly, mocking tone in stone. For whatever reason, filmmakers have latched full throttle (ahem) onto this oh-so-unnecessary formula as though that's what moviegoers really want when a TV series is made into a film.

We watched the original TV series because while the shows may have included jokes and humor, it did take the characters, story and itself seriously enough to make the show believable and the characters likeable. That's the reason we watched the series. That's the reason we liked it. The TV shows rarely, if ever, mocked themselves, their own characters or the material. Yet, here we are. At every step, the filmmakers of Baywatch take every opportunity to mock such lifeguard elements as tans, bathing suits riding up butt cracks, the nerdy horny guy, crude and awkward shower scenes, wearing too much tanning oil, calling out unnecessary homophobic elements, shaking boobs, showing slow motion characters with everyone else in real-time or whatever other low-brow humor the writers can find to mock the original TV series.

As I said, I don't go into these TV-series-made-into-films to see the original material mocked. I go to see and relive what made the TV series great. Yet, that's nowhere to be found in Baywatch. Oh well, in the annals of time, this film (like so many before it) will ultimately go down as a spoof. To this day, the best film spoofs include Airplane followed closely by GalaxyQuest which are only loosely based on more serious shows before it. If movie makers really want to create successful spoofs, they should go watch these films to understand why they worked and why this Baywatch film doesn't.

DavidGReviewed in the United States on July 22, 2018
4.0 out of 5 stars
A Funny, Mildly Smutty, And Genuinely Warm Hearted Comedy
Verified purchase
I don't remember ever watching this show on tv and didn't even know a movie had been made of it. However, I came across the trailer for this movie in a Youtube video of all the trailers for this year's list of the Razzie's Worst Picture nominees. The Baywatch trailer had me laughing out loud enough that I decided to check the movie out and I'm glad I did. A lot of what passes for comedy these days tends toward the ugly, the gross, or the boring. This film is laugh out loud funny without any mean edges to it and it is certainly not boring. It blends eye candy, action sequences, rom-com situations, buddy movie dynamics, and a redemption story into a warmly entertaining mix. Yes, the plot is thin and at times very predictable but this is Baywatch, not Shakespeare, so the comic book plot just adds to this film's goofy charm. One last thought - I haven't seen any other Dwayne Johnson films but I like him enough here that I will be looking for other stuff he's in.
24 people found this helpful

Antique GirlReviewed in the United States on October 23, 2018
2.0 out of 5 stars
Thought I take a minute...
Verified purchase
To save a few people from this film. Since movie critics can no longer be trusted because of their politics it has been defeating to use them as a resource, as movies swing between a near perfect score and almost completely trashed, there is an inescapable robot lockstep manner that cannot give an honest rating in fear that they would be outside of the pack. It is quite sad that this has happened and movie critics have been forced to agree, but if you go in blind to a film like I did with this one because of Rotten Tomatoes is really a bunch of Rotten Critics you are still going to suffer some movies you wish you haven't seen. "Baywatch" is one of those films. I remember the tone was all over the place. The humor didn't work for me and then it became serious. It didn't care for it as the characters didn't become anymore likable. By sitting on the fence with the tone I wasn't laughing at the gags and wasn't behind the action. Clearly, this is the case of another trailer working its magic and selling something that the movie doesn't deliver.
18 people found this helpful

ChantelReviewed in the United States on June 19, 2018
5.0 out of 5 stars
A Review From an Actual Lifeguard
Verified purchase
I'm a lifeguard so watching the "lifeguard saves and other lifeguard things" that happen in this movie make me cringe (like when Mitch dove head first off the rock bridge thing to save a man that hit his head on those same rocks and yet Mitch didn't provide head stabilization or get a backboard and carried him out of the all floppy headed) but this movie makes me laugh every time I watch it. It's a stupid kind of funny. The plot line is thin but it's a damn good movie for that night where you just want to laugh and look at almost naked but good looking Hollywood people.
51 people found this helpful

Road ScholarReviewed in the United States on October 27, 2018
1.0 out of 5 stars
Technically it is ridiculous, ...Don't waste your time!
Verified purchase
I read the review by an actual lifeguard.
GOOD CATCH on lifesaving "dives" (?) into turbulent water...
Nah, supposed to jump feet first, arms spread wide, and keep head up to look for the rising body.
As former EMS, no C-spine precautions against an obvious head trauma? CRINGE WORTHY....
Motorcycle racing toward the end of a crowded pier to save one, when endangering multiple others? NOPE.
If this was all Hollywood had to offer, ....what a lack of technical advisors!
Unless you're into just looking at "hot bods" (Go to the beach or pool and have a swim, exercise, meet people.)
13 people found this helpful

Looking CloserReviewed in the United States on February 14, 2019
1.0 out of 5 stars
Help! I'm drowning in stupidity!
Verified purchase
Incredibly, they were able to make a dumb TV show an even dumber movie. Why is an Olympic swimmer emasculated in this story? As if it takes nothing to become a Olympic champion. Despite his antics, he's an athlete. But he can't compete with this beach cult! The protagonist is some kind of god, of course. All other males are either made to be nerds, emasculated, or incompetent. There's a kind of privilege whereby the white male swimmer is denigrated by the black god-like "Lieutenant." The pretty boy tries to be part of the group, but is mistreated, instead, and thus starts to do dangerous things to be accepted. They save lives, and he wants to also. People are set up to fail in this way. This is the way blacks have been treated in this country: set up to fail. This kind of reverse privilege, deprecating someone because of race or any other reason--a white guy in this case--is a weak attempt to correct the wrongs done to blacks for centuries. It feels good to turn the tables out of some feeling of guilt, but nothing is learned, only the behavior becomes validated. No one should be disenfranchised from any society, large or small.
4 people found this helpful
See all reviews
Back to top
Get to Know Us
Make Money with Us
Amazon Payment Products
Let Us Help You
EnglishChoose a language for shopping. United StatesChoose a country/region for shopping.
© 1996-2021, Amazon.com, Inc. or its affiliates