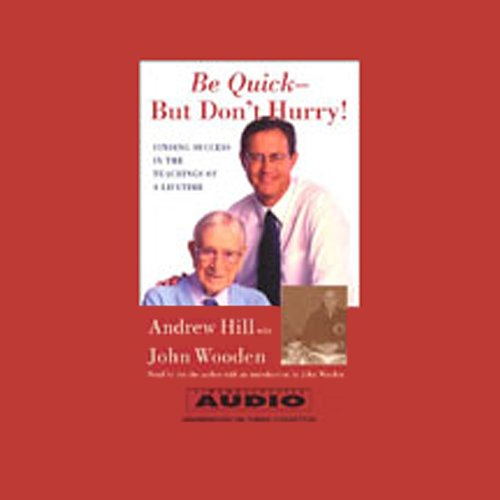 Be Quick - But Don't Hurry!

Andrew Hill (Author, Narrator), John Wooden (Author, Narrator), Simon & Schuster Audio (Publisher) & 0 more
4.7 out of 5 stars 60 ratings
See all formats and editions
Sorry, there was a problem loading this page. Try again.
Perhaps the least controversial sports honor in living memory was the selection of John Wooden as "Coach of the Century" by ESPN. Wooden presided over college sports' most famous dynasty, winning 10 NCAA basketball championships in 12 years. His UCLA teams won with quickness, and always with class. Wooden was a teacher first and foremost, and his lessons - taught on the basketball court, but applicable throughout one's life - are summarized in his famed Pyramid of Success.

An all-city high school player in Los Angeles, Andrew Hill played - a little - in three national championships, from 1970 to 1972. At that time, Hill was upset at how unequally Wooden treated his starting players, and clashed with Wooden over a variety of social and political issues.

Hill went on to a successful career in television, rising to the presidency of CBS Productions. And one day, some 25 years after graduating from UCLA, he realized that everything he knows about getting the best out of his people he had learned directly from Coach John Wooden.

Be Quick - But Don't Hurry! tells the story of their renewed friendship, while sharing the lessons and secrets that hold the key to managing creativity in the idea-driven economy of the 21st century. Full of sound advice and warm reminiscence, this is the management audiobook of a lifetime.

Special invitation from Audible!
Learn more about Membership
List Price: $21.27
You Save: $5.32 (25%)
By completing your purchase, you agree to Audible’s Conditions Of Use
Sold and delivered by Audible, an Amazon company
Share

4.7 out of 5 stars
4.7 out of 5
60 global ratings
How are ratings calculated?
To calculate the overall star rating and percentage breakdown by star, we don’t use a simple average. Instead, our system considers things like how recent a review is and if the reviewer bought the item on Amazon. It also analyzes reviews to verify trustworthiness.
Top reviews

Fabio
5.0 out of 5 stars Tremendous book for those interested in Success and Balance
Reviewed in the United States on November 28, 2013
Verified Purchase
If you want to be a lifelong learner read this book. John Wooden exemplifies leadership, family, balance, and personal achievement. Success does not come from winning but from doing the best you can with the gifts you have. Andy Hill realized that much of what he accomplished in his business and personal life was a result of what he had learned from this remarkable man. He did not realize this until 20 years after he had left school. To me this is the best book that is written about Wooden because it comes from a player who was disillusioned with Wooden during his playing career. Only later did he realize the enormous impact that this man had on his life. This is a compelling story of a student's beginning disillusionment, then growth, maturity and finally love and gratitude for a Teacher who had transformed his life. It is a wonderful book.
Read more
4 people found this helpful
Helpful
Report abuse

Steven M. Menkus
5.0 out of 5 stars More than Basketball Motivation
Reviewed in the United States on March 1, 2020
Verified Purchase
An excellent management refresher based upon the legendary basketball coach’s pyramid of success and applying the principles to business management. Well written with many examples so it is an easy read.
Read more
Helpful
Report abuse

Michael J
4.0 out of 5 stars Lessons of a Lifetime
Reviewed in the United States on October 2, 2014
Verified Purchase
The lessons Coach Wooden shared are a recipe for a fulfilling life, and Andy does a great job of sharing these important lessons in a simple way. I would honestly recommend this as required reading for all high school freshman as well as parents, teachers, coaches and anyone leading any type of organization. If there was one thing missing that made this book possible, it would be Andy's vulnerability during reflection. It opened the space for the lessons to be seen. Great work and thank you!
Read more
3 people found this helpful
Helpful
Report abuse

Fuad Oñate Sánchez
5.0 out of 5 stars Beautiful Book
Reviewed in the United States on November 6, 2018
Verified Purchase
A complete lesson of how a person who is in charge of an organization or a group of people must act and approach to differente situations involved with interpersonal affairs. Most important topics of the book are flexibility, the importance of effort above of winning and practice planning in order to have results.
Read more
One person found this helpful
Helpful
Report abuse

amazone41
5.0 out of 5 stars Along with Drucker's book, one of the top 5 books on practical management ever printed.
Reviewed in the United States on November 3, 2015
Verified Purchase
If you are a manager or leader. You need to read this. It is a very quick read and you can read one of the short chapters, put it down and come back later. Wish I could give it 10 stars. It's simple but brilliant.
Read more
2 people found this helpful
Helpful
Report abuse

Chen Sun
5.0 out of 5 stars Best management book for small teams I've ever read
Reviewed in the United States on December 19, 2011
Verified Purchase
Working in high-tech, I'm constantly seeing and reading books for startups. Though this book is based on basketball management, it is the best team management book I've read. Successful startup and basketball teams both rely one small groups of talented TEAM players. How does one create this? Read this with also "Wooden", and learn the management rules for creating world-winning teams.
Read more
One person found this helpful
Helpful
Report abuse

Randal Titony
5.0 out of 5 stars What a great little book!
Reviewed in the United States on February 20, 2005
Verified Purchase
I really enjoyed this book by Andy Hill. Not until he realized his own successes and failures did he fully see all that he learned from coach Wooden. The foundational principles taught by coach Wooden are one's that we can all admire. "Make each day your masterpiece." Buy this book, then give it to a friend.
Read more
One person found this helpful
Helpful
Report abuse

Bill
5.0 out of 5 stars Five Stars
Reviewed in the United States on September 10, 2017
Verified Purchase
This is tremendous acknowledgement of a great man...thanks for the opportunity to be a part of his life.
Read more
Helpful
Report abuse
See all reviews

Charles Bongiorno
3.0 out of 5 stars Interesting
Reviewed in Canada on February 3, 2017
Verified Purchase
Interesting but there are too many inspiring books to make a difference.
Read more
Report abuse

Valued customer
5.0 out of 5 stars Five Stars
Reviewed in the United Kingdom on October 9, 2015
Verified Purchase
Very good condition. Description was accurate!
Read more
Report abuse
See all reviews
Back to top
Get to Know Us
Make Money with Us
Amazon Payment Products
Let Us Help You
EnglishChoose a language for shopping. United StatesChoose a country/region for shopping.
© 1996-2021, Amazon.com, Inc. or its affiliates