You've subscribed to Tarzan! We will preorder your items within 24 hours of when they become available. When new books are released, we'll charge your default payment method for the lowest price available during the pre-order period.
Update your device or payment method, cancel individual pre-orders or your subscription at
Your Memberships & Subscriptions
There was an error. We were unable to process your subscription due to an error. Please refresh and try again. 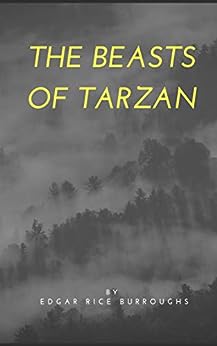 The Beasts of Tarzan Kindle Edition

New releases
Explore popular titles in every genre and find something you love. See more
Books In This Series (14 Books)
Complete Series 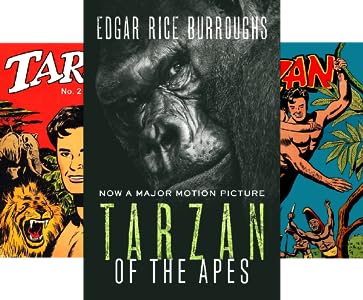 4.5 out of 5 stars
4.5 out of 5
159 global ratings
How are ratings calculated?
To calculate the overall star rating and percentage breakdown by star, we don’t use a simple average. Instead, our system considers things like how recent a review is and if the reviewer bought the item on Amazon. It also analyzes reviews to verify trustworthiness.
Top reviews

Irish Princess
5.0 out of 5 stars Burroughs continues the adventure.
Reviewed in the United States on July 26, 2017
Verified Purchase
This is third book in the Tarzan series. A lot of fantasy here, as he befriends a panther, a number of apes, anthropomorphism does play somewhat of a roll here. which eventually help him in his adventure to find his wife and child, and destroy at least one of his arch enemies. Keep in mind, that these stories were written at the turn of the century, so the language and the cadence of the writing are old-fashioned, racy in tbeir own way, and flow in the style of the era in which it was written. I for one love it. The story is predictable, but there are many heartwarming and heartbreaking surprises along the way, and of course the ending leaves all possibilities open for the continuation of the next installment of the story, which I am going to start soon. I did think the text was a little smaller than the last two editions of Tarzan books that I have bought, but other than that, I thoroughly enjoyed this story.
Read more
Helpful
Report abuse

L. Villa
5.0 out of 5 stars Totally biased review........
Reviewed in the United States on June 18, 2014
Verified Purchase
Edgar Rice Burroughs books, for me, are just about perfect. There is a reason why his books still have such great popularity to this day

I first started reading him as a child when I was about 6 or7 years old. It blew my mind then and continues to do so till this day. It opened up a world of adventure for me that fueled my ambitions to travel, my love of book reading, animals and plants. It introduced me to possibilities that I did not even know existed at the time like space travel (and boy does that age me or what), the possibility of time travel, aliens, life on different planets, the possibility of ancient civilizations existing and so on.

This is the third book in the Tarzan series and concerns the kidnapping of Tarzan's son. The chase is on and Tarzan gets captured and abandoned on an island. What happens to him there and the fate and survival of his son is the topic of this book.

New readers of ERB may consider this well dated as the plot twists may seem so familiar due to the fact that they will have encountered such writing twists from modern day writers. But this author was one of the primogenitures of this genre. Much like Arthur Conan Doyle created Sherlockian detectives, ERB created adventurers, 'wild men', anthropomorphic animals, and adventures you happily 'live' with all throughout your life.

This is a great read that you will go back to over and over again as you read further books in the series.
Read more
One person found this helpful
Helpful
Report abuse

D A Lawson
3.0 out of 5 stars The first two were much better, but this one is worth reading.
Reviewed in the United States on September 18, 2011
Verified Purchase
Burroughs is a fantastic writer, and his details of everything from characters to settings are vividly descriptive. Unlike the first two stories in the series, TARZAN OF THE APES and THE RETURN OF TARZAN, I didn't feel this story moved well. There was a lot of action and great characters, but much of the story seemed redundant. I read over and over about Tarzan eating raw meat by preference despite his being "civilized." I didn't think that added to the plot. Plus, there were several instances in which both Tarzan and Jane misjudged other characters or made poor decisions that put themselves or others in peril. Once or twice would've been believable; but when it kept happening, the story became less appealing.

Don't get me wrong, THE BEASTS OF TARZAN is still worth the read. It has all the adventure and danger that you expect from a Tarzan story, and, for me, the dimension added by animal characters was extremely interesting. If the first two hadn't been so fantastic, I probably would have given this one a higher rating. I'm looking forward to reading the other Tarzan stories. If you're a Burroughs fan, definitely DON'T skip this one. Just don't let yourself be disappointed when it isn't as good as the first two.
Read more
2 people found this helpful
Helpful
Report abuse

H. S. Wedekind
5.0 out of 5 stars There are even more fantastical adventures in this book than in the first two.
Reviewed in the United States on June 19, 2012
Verified Purchase
BEASTS OF TARZAN is an escapist's dream come true. There are so many adventures and cliff-hangers in it that you'll wish it would just go on and on and on. Villains abound. Lions, crocodiles, and savage tribes all try to best The Ape-Man. Fortunately, Tarzan gets much needed help, always just in the nick-of-time, from his small band of friends: Mugambi the chief of the Wagambi, Sheeta the leopard and Akut the king of the great apes on Jungle Island. Did I mention that Tarzan's bitterest foes are involved in the events that begin the story and cause our hero no end of worry? No? Well, if you are familiar with the first two books, you'll know instantly who I mean.

drdanaac
5.0 out of 5 stars The Beasts of Tarzan
Reviewed in the United States on June 27, 2020
Verified Purchase
Another in the great books of Edgar Rice Burrows. This book is suspenseful and a great read. It is entertaining from the 1st Chapter and gives us a more in depth picture of the way Tarzan interacts with the jungle beasts. Burrows develops his storyline and entertains his readers with his usual flair and keeps us on the edge of our seats until the last chapter.
Read more
Helpful
Report abuse

Michael A Frais MD
4.0 out of 5 stars Easy to read and interesting adventure story
Reviewed in the United States on January 19, 2014
Verified Purchase
This is one of the series of the Tarzan books written by this prolific author. The book is written in an easily readable style, and makes enjoyable pleasant, light reading.
The author is writing at the beginning of the 20th century, when much of the African continent was unknown. It is interesting to follow the workings of his mind, as he creates a series of interesting and unique civilizations for Tarzan and the reader to explore.
As part of the format, one knows that our hero will find himself in mortal peril, but will predictably always escape, allowing us to look forward to the next book in the series.
Read more
Helpful
Report abuse

Andrew
3.0 out of 5 stars Slightly less good than the first two
Reviewed in the United States on July 12, 2012
Verified Purchase
The first two Tarzan novels were filled with action, adventure, and excitement. The third book,the beasts of Tarzan is much less exciting, as the plot is very repetitive.

This time around, tarzan learns that his son has been kidnpped by an old enemy. Tarzan tries to rescue his son but ends up stranded on an island.

Possibly the worst parts of the book were the ones that focused on Jane, since she can often be very dull. She, too has been taken, and she again lands on the same island ss Tarzan.

While this book may not be the best in the series, I would reccomend it to anyone who is interested in the Tarzan books because it concludes the second one.
Read more
Helpful
Report abuse

Patrick Ullmer
3.0 out of 5 stars Meh
Reviewed in the United States on April 13, 2021
Verified Purchase
Fell out of love with the Tarzan series after this book.
Read more
Helpful
Report abuse
See all reviews

Ian M. Fidler
1.0 out of 5 stars Unreadable
Reviewed in the United Kingdom on January 26, 2021
Verified Purchase
I'm not sure whether this is the original words or not but I've read the first two Tarzan books and they were great. But this version is unreadable. It's almost like it's been written in a foreign language and auto-translated. It makes no sense at all. Try another version. I just wish Amazon would let you return Kindle books.
Read more
Report abuse

Ernie
2.0 out of 5 stars You get what you pay for....
Reviewed in the United Kingdom on October 24, 2018
Verified Purchase
The quality of the cover print is horrible.
The text inside is small.
Like a pirated book you get from a guy in a dark alley. But for 3£, I should have not excepted any better....
Read more

2.0 out of 5 stars You get what you pay for....
Reviewed in the United Kingdom on October 24, 2018
The quality of the cover print is horrible.
The text inside is small.
Like a pirated book you get from a guy in a dark alley. But for 3£, I should have not excepted any better....

Anne Rathbone
5.0 out of 5 stars Great Tarzan Books
Reviewed in the United Kingdom on March 2, 2013
Verified Purchase
The way to read Tarzan these days as some of these books are no longer in print. Childhood revisited. Thanks
Read more
Report abuse

Moaner
4.0 out of 5 stars Another Good Read
Reviewed in the United Kingdom on December 30, 2012
Verified Purchase
Another good read from Edgar Rice Burroughs,makes for really exciting reading, for those who like these sort of stories.Many an happy time of reaing
Read more
Report abuse
See all reviews
Back to top
Get to Know Us
Make Money with Us
Amazon Payment Products
Let Us Help You
EnglishChoose a language for shopping. United StatesChoose a country/region for shopping.
© 1996-2021, Amazon.com, Inc. or its affiliates