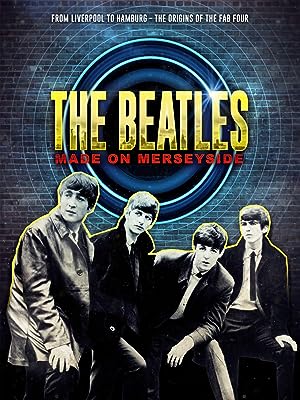 The Beatles: Made on Merseyside

(31)
6.61 h 23 min201813+
The Beatles defined music and popular culture like no other band ever will - but how did they make the journey from Merseyside teenagers to international pop stars in the 1960s? The Beatles: Made on Merseyside recounts how American rock 'n' roll and rhythm and blues dragged post-war Liverpool into one of the most vibrant music cities ever with the Mersey Sound.

BrabenderReviewed in the United States on January 26, 2019
5.0 out of 5 stars
Glad to see former Quarrymen get some recognition.
Verified purchase
Thoroughly enjoyed the early views of Liverpool and what it was like at the beginning of The Quarrymen through their evolution into The Beatles. Sad though that the film mis-identifies Colin Hanton and Len Garry, two of John Lennon’s original Quarrymen.
3 people found this helpful

EdReviewed in the United States on October 7, 2018
5.0 out of 5 stars
Fav Beatles 4-Ever
Verified purchase
Newly added videos and pix. Excellent historical perspective of how the BEATLES got to the top starting on Merseyside. READY SET GO!
3 people found this helpful

Emily E.Reviewed in the United States on November 23, 2019
4.0 out of 5 stars
Brilliant
Verified purchase
Simply brilliant

Steve RammReviewed in the United States on August 25, 2019
4.0 out of 5 stars
Review of the DVD – Interesting for early years but NO actual BEATLES MUSIC is used
As I post this review I see that there are two older reviews of the STREAMING Version of this 2018 documentary. The DVD version just came out and that’s what I’m reviewing here.

This 87 minute film could best (no pun intended!) called “The Peter Best Story” because the original drummer (once they were called the Beatles but before their EMI recording contract) is the only member interviewed. (Yes there are archival clips of Paul McCartney answering questions – and not much of that) but the NEW interviews are wit members of the Quarrymen and The Searchers and then there is their first touring manager. What I found most interesting was the archival footage of Best’s mom – who owned one of the clubs.

Now, when you make a music documentary you need to license the music and that is obviously expensive. And, in the UK recordings go into the public domain in 1962. So instead of hearing the Beatles singing songs like “Kansas City”, we get Wilbert Harrison. You will see lots of footage of Elvis, but none with a soundtrack.

Ringo enters the picture about 80% through, when Best is replaced by him.

There have been feature films about the early formation of the Beatles (“Backbeat is one), but here we get archival footage I’ve not seen before.

I enjoyed this DVD, but it has its limitations (especially if you want to HEAR them play.
There are no special or bonus features. Just play and “Scene Selection”.

Lacked subtitles for the elderly, disabled, hearing impaired, and ESL viewers. Disrespectful & cheap on the part of the producers especially when audio & enunciation is off, and the varying old British dialects.
See all reviews
Back to top
Get to Know Us
Make Money with Us
Amazon Payment Products
Let Us Help You
EnglishChoose a language for shopping. United StatesChoose a country/region for shopping.
© 1996-2022, Amazon.com, Inc. or its affiliates