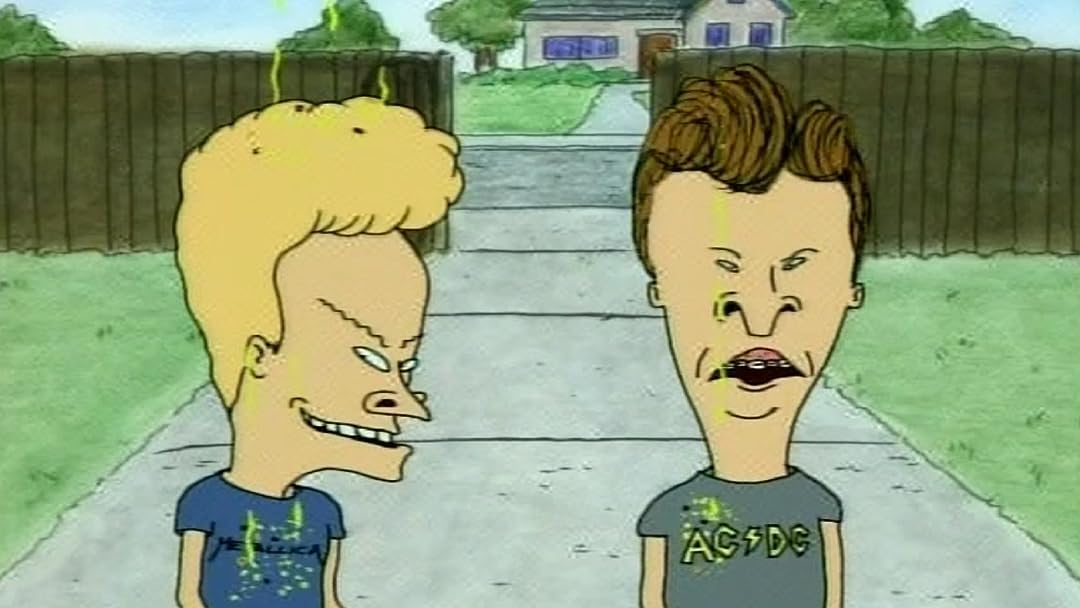 (1,166)
7.51993NR
Relive all of Beavis and Butt-Head's classic adventures, handpicked by Mike Judge himself. This collection totally rules.

AdamReviewed in the United States on February 23, 2021
3.0 out of 5 stars
Great but...
Verified purchase
The DVD's themselves are great, been a fan of Beavis and Butt-Head since I was a kid in the 90's staying up too late on school nights watching MTV Oddities. I used to own this this set back when they first released, and this set is not the same. All the content is the same, just the DVD case itself is different and the lack of sleeve. I was under the impression that I would be receiving the DVD set with the cut out sleeves that the DVD boxes slide into because that's what is pictured. Instead I received just the cases without the sleeves. Not really that big of a deal, but that was like half the reason I purchased this set. They should really update the description or change the pictures they're using to advertise this DVD set to just the plastic case you'll be receiving so as not to cause confusion.
One person found this helpful

Amazon Customer Reviewed in the United States on July 8, 2020
5.0 out of 5 stars
5 Stars for My Bunghole
Verified purchase
A series that is so stupid it’s funny. You literally just can’t help but to laugh. I purchased this as a Christmas present for my brother who loves to find the most absurd quotes and repeat them at inappropriate times. Price was fair and the package came damage free.
4 people found this helpful

CoreyReviewed in the United States on November 5, 2019
4.0 out of 5 stars
I grew up on 90's MTV.
Verified purchase
Vol. 1 out of all 4 is my least favorite but I got it to complete the whole set.
You can definitely see how mike judge started off with the quality of the first 8 episodes and then how he transitions into better quality with his creativity.

not the same as it once aired because they don't show the music video's in between each skit but it's still worth it, especially if your collecting shows that you grew up on and this being one of them.

ThomasReviewed in the United States on January 16, 2021
1.0 out of 5 stars
No Music Videos
Verified purchase
There are no music videos... That is 30% of the show and the only reason I purchased it. Amazon won't allow me to return this. Back to YouTube I guess.
One person found this helpful

John HammelReviewed in the United States on February 24, 2006
4.0 out of 5 stars
Classic Animation Comedy
Verified purchase
Beavis and Butthead will probably stand as one of the classic high-points of animation comedy. Everyone likes to think of The Simpsons as the cartoon that pushed the envelope, but I think Beavis and Butthead will be the one that many animators cite for having the greatest effect on them (Adult Swim anyone).

That said, Beavis and Butthead, Vol. 1 - The Mike Judge Collection is great way to relive those classic Beavis and Butthead moments and to understand why the show was such a monumental piece of TV. Each segment is rewatchable, and never seems to get old at all, and you get so many that will take many viewings to watch them all, anyway. In many ways, I wish the Adult Swim people would take note of this instead of rushing out all the volumes of their shows. Moreover there are not a lot of extras to take away from the experience. There is only one creation documentary, so you can bet most of the money you spend goes to actual episodes, and not to superfluous "extras."

However, I was very disappointed to learn that there are only eleven video commentaries in the entire package. This, I thought, was one of the funniest things about the entire cartoon. I greatly miss them ripping up truly bad videos, and I wish Mike Judge chooses to add more of them next time, along with the option to view them in context of the cartoons.

All-in-all, this is definitely a great box-set, and one you will enjoy greatly.
6 people found this helpful

GregS.Reviewed in the United States on September 22, 2018
3.0 out of 5 stars
Memory Lane
Verified purchase
What can I say, its Beavis and Butthead. Still as funny from the days watching as a kid in the 90s. Thing is alot of the episodes are edited and chopped. Whole scenes have been removed as well. Over all its a fun little trip down memory lane.
One person found this helpful

Rebecca L WeschReviewed in the United States on November 7, 2017
3.0 out of 5 stars
Cheap entertainment
Verified purchase
It is true these episodes are heavy edited specially when they are doing their music video views, but this only cost me $5. I feel overall I got more than $5 worth of laughs from this video collection. Just watching some of these crazy characters brings back memories.
3 people found this helpful

Bryan J. PetersonReviewed in the United States on April 15, 2011
4.0 out of 5 stars
I like it.
Verified purchase
As I said in my review of volume 3 of the Mike Judge Collection, I am in complete and total agreement with those who feel that Mike should buckle down and release the entire series on DVD and yes, that it could be done leaving the episodes fully intact complete with the videos in their proper place. Though admittedly as I also said I was always more interested in the episodes themselves than the videos, though I did have favorites. That said I don't believe that the Mike Judge collections are the travesty that many reviewers on here seem to believe them to be. In fact I haven't laughed so much or so hard in a very long time.
Volume 1 features forty or so episodes and thirteen music videos, the latter of which are always found on disk 3 of each volume. I'll be focusing more on the episodes themselves since as I said those were always what interested me most.
As many reviewers pointed out, a great number of the episodes have had material cut from them, and wile in many cases this doesn't bother me there were instances where it was a little disconcerting. Notable such instances occured in Manners SUck and Tainted Meat. In the former, the toilet scene was cut and in the latter the health inspecter's comments about a fierce new parasite. FOrtunately both are available as easter eggs so at least they weren't removed entirely. But I'll list my personal favorites below. I like most if not all episodes in this volume but these are just my personal favorites.
No Laughing: After having the duo sent to his office four times in one day, Principal McVicker decides enough is enough and forbids them from laughing in class for a week under threat of expulsion. Unfortunately, Mr. Buzzcut isn't going to make it easy for them...
Home Improvement: The duo attempts to help Tom Anderson paint his house, but paint fumes give them...other ideas.
Lawn and Garden: The duo is asked to trim a tree on Anderson's property with predictably disastrous results.
Blackout!: Forced out into the streets of Highland by a power outage, the boys cause massive chaos when they attempt to direct traffic.
Plate Frisbee: While hanging out at Stuart's house, the boys cause trouble on the streets of Highland when they discover that an antique plate belonging to Stuart's mother makes an excellent frisbee while Stuart looks on in horror.
Manners Suck: A guest lecturer attempts to teach proper manners to the students of Highland High, though the boys' presence predictably means that the attempt goes badly wrong.
VS. the Vending Machine: The boys attempt to overcome a mechanical failure in a vending machine before someone else can steal their snacks.
Tainted Meat: Beavis causes a health crisis at BUrger World that costs the duo their jobs and temporarily closes down the restaurant.
The Pipe of Doom: While messing around at a construction site, Butthead gets stuck in a pipe and Beavis must figure out a way to save him.
Generation inCrisis: An amateur documentary film maker tries to use the duo in a film he is working on that depicts teenagers as lazy couch potatoes.
Rabies Scare: After being bitten by a bad-tempered dog, Beavis becomes convinced that he has rabies and is treated by a mean-spirited doctor.
Madame Blavatsky: The boys visit a fortune teller in hopes of finding out whether they'll ever score, but it's Beavis who sees all.
1900-Beavis: After experimenting with a phone sex hotline, the duo attempt to start one of their own.
The Great COrnholio: Too much sugar causes a raddical personality change in Beavis, who transforms into a hyperintense profit of doom.
Dream On: Boredom causes the duo to fall asleep while watching TV, which leads to their dreaming of being on classic TV shows.
Beaverly Buttbillies: After seeing it on TV, the duo attempts to dig for oil in their backyard with disgusting results.
All in all I thoroughly enjoyed this collection even though a few small favorite scenes of mine were edited out and not all are available as easter eggs. For me at least the laughs far overshadowed this detail.
8 people found this helpful
See all reviews
Back to top
Get to Know Us
Make Money with Us
Amazon Payment Products
Let Us Help You
EnglishChoose a language for shopping. United StatesChoose a country/region for shopping.
© 1996-2022, Amazon.com, Inc. or its affiliates