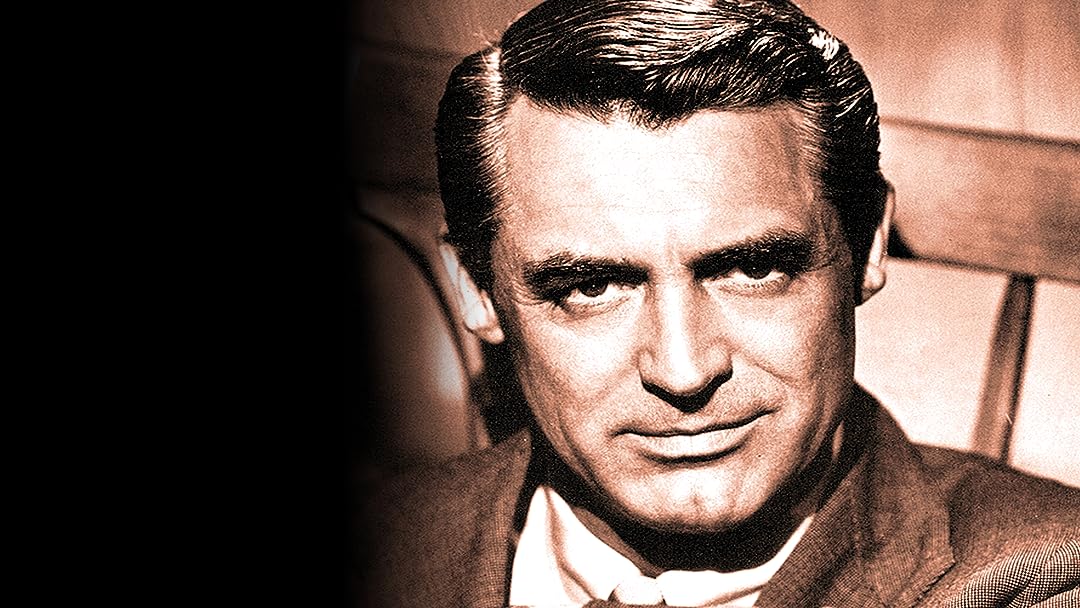 (37)
6.652min2017ALL
Cary Grant is one of the most enduring icons of Hollywood's golden era. Film historian and biographer David Thomson describes him as the greatest screen actor of all time. Now, for the first time, one of Hollywood's greatest stars tells his own story. From a child of poverty to a man of global fame, Cary Grant explores his own screen image and what it took to create it.

TrixieReviewed in the United States on August 19, 2019
1.0 out of 5 stars
Cary Grant and his fans deserve better!
Verified purchase
So Blonde Venus opposite Marlene Dietrich is a "mediocre" film? Has anyone involved with this doc seen this amazing, legendary Josef von Sternberg film? I think not. Or THE woman who infamously said something like "IF he can talk, I'll take him" after seeing him walking on the Paramount lot, THE woman who single-handedly saved Paramount during the early days of the Depression. Mae West's "She Done Him Wrong" is "mediocre"?

Did ANY film fans or film historians contribute to this? Plus the narrator and voice-over actors are bland, terrible accents, and doing a great disservice to the unique, delightful, complex man we know, love and admire as "Cary Grant."

I can't write more, cos I'll have to watch the rest of it later. I'm getting too irritated to continue. Do you know the delightful "The Awful Truth," one of THE funniest films ever, is a classic screwball comedy? IF I hadn't seen that film many times, I'd never know how funny it is, how he and Irene Dunne, and now Kate Hepburn in one of my all-time fave films, "Bringing Up Baby," were and remain comedy classics.

Iconic films, elevated with Cary Grant's unique charm, charismatic, innate brilliant timing, his graceful good looks, opposite two of the finest American actresses in timeless roles, yet none of that comes across in this dry, dull documentary.

You want to know about Cary Grant? Just watch his films. That will tell you far more than this pathetic, sad documentary.

RevueReviewed in the United States on July 15, 2017
2.0 out of 5 stars
Hopefully This is a Precursor to Putting Cary's Writings into Print
Verified purchase
The movie is uneven at times, with too much emphasis on reenacted LSD scenes. The point of how LSD therapy helped Cary is clearly stated in Cary's "voice" in the movie. We don't need to keep seeing the actor playing "Dr. Hartman" light up a cigarette and the actor playing "Cary" lying with a mask over his eyes to understand what Cary is conveying. There are repeat images of kites flying and ocean waves that look nice but don't feel relevant to this film. I would have liked to see more images and videos of Cary, hear more of his writings and hear more commentaries. I also would have liked to know more about Cary's thoughts on his third wife, Betsy Drake, who he was married to the longest. He gives us some insights on his first and second wives in the film. I assume Cary has written a lot about Betsy so I was disappointed how little of his writings on her was shared in the film.

I felt the film rushed in its Cary Grant journey. I would have liked it to have slowed down and treated the home movies separately from the films commented on and Cary's writings. Perhaps the home movies could have been bonus footage. That would have helped make the movie smoother to watch.

Hopefully, Cary's writings will be published soon for his fans and for future generations to come. His voice is heard in the movies. Now, please permanently seal them on the written page.
25 people found this helpful

Dee Reviewed in the United States on May 14, 2018
3.0 out of 5 stars
How could Grant be a Cockney?
Verified purchase
I was confused as to why Bristol born Cary Grant was frequently referred to as "COCKNEY".
This would imply that not 1 person from (or with any knowledge of) England was involved in the making, editing or any preview of "Becoming Cary Grant". To be Cockney, one is supposed to be born within the sound of the Bow Bells in East London. Cary Grant was born on the other side of the country in the City of Bristol.
I was also surprised to find out about all of the LSD therapy, I found this very interesting.
A pleasant watch, but not all well researched.
7 people found this helpful

anastasia wilkersonReviewed in the United States on January 14, 2018
3.0 out of 5 stars
Pretty superficial and enough with the waves of Malibu
Verified purchase
Completely agree with other reviewers regarding repeated scenes of "Cary" tossing around with an eye-mask on. We get it: he took LSD therapy. I understand that Grant's sexuality is a complicated and contentious issue.... but this documentary says NOTHING about his years'-long cohabitation with Orry Kelly, with whom he moved to Los Angeles, and then again with Randolph Scott, with whom he lived on-and-off for several years- even between various women & wives. Even if theirs was only a deep friendship- this film seems remiss in never mentioning it. There needed to be much more information from Grant biographers and his own memoirs. Pretty superficial and enough with the waves of Malibu!
13 people found this helpful

Original Toe KneeReviewed in the United States on May 21, 2020
5.0 out of 5 stars
Finding himself through becoming someone else, searching, and finally becoming his true self.
Verified purchase
Very beautiful, REALLY... if you think about life as a process of redemption, Cary Grant /Archie Leach took full advantage and showed awesome courage, eventually becoming a TRUE person....The layers of emotional and psychological shielding he exhibited mimicked the times, and brought disease to so many, and never provided redemption to anyone. He was an early pioneer, with enough courage, and actually found himself...the proof is in the love he tried to show his mother after so many years of losing her in childhood, the love he showed his future wife after he had healed enough to finally know he could be 100% present, and she says he WAS.... the love he showed his daughter, whom he devoted full time and total commitment to... such a life legacy! A place few ever find and so few ever seek...… he found it...and instead of an ugly journey, though despair and loneliness were all along the way, and hurt and rejection, he still found his goal...just in time...and finished doing his best sharing back with his audience; his most authentic self....

Very few will "get" this journey, because very few seek it...and those who claim they have found it are the least likely representatives that it is ever worthwhile....the life of Cary grant always inspired me, because from a distance I could almost see this journey and his struggle...I am sad his autobiography hasn't yet been released, I think his life journals and notes represented here are the most amazing thing! They showcase what he would have wanted shared about his journey.... he got there! His ex-wife at the end says it very well...this is to remind any of you who are still human out there... if you can "fake it 'til you make it", then show me when you "made it"...in other words... I am waiting for when you show up as the person you were meant to be.... like Cary Grant... Archie Leach finally did.... or, are you pretending your whole life and still can't find yourself?

Craig HaynesReviewed in the United States on May 10, 2021
3.0 out of 5 stars
Good, but still not the WHOLE story.
Verified purchase
The relationship between Randolph Scott and Cary Grant is well-documented. Why isn't that a part of this otherwise GOOD discussion of Mr. Grant's inner psyche, career and life? There is good discussion about his relationships with women. Why aren't his relationships with MEN given the same treatment? While there are hints of Mr. Grant's sexual fluidity (definitely in his early career) in this film documentary we get none of the facts. Why? What a fascinating life and what an abominable genesis. The story of his mother is heart-rending. But Archie soared, didn't he. That's the overwhelming message for me. He created something, from nothing. But he was always searching and seeking and trying to understand himself and his place in the world as a human being. It is the human challenge of us all.

Phrony1Reviewed in the United States on September 2, 2019
5.0 out of 5 stars
Well worth watching
Verified purchase
Many of the reviews have highlighted the film’s shortcomings, all presumably rightly. But I nonetheless liked it. It shows Grant to have been a more decent, thoughtful, complicated, interesting, and open-minded person than I’d have expected. It basically deals w his sustained efforts to resolve childhood scars. I think we often have a tendency to think less of the people in the past than they deserve and I don’t want to be guilty of that now, but I wd be surprised if many people in his position or during his time did that w as much sustained intensity and honesty. He seems to have been very willing to look at his own role in his problems, however unintentional, as opposed to yielding to the temptation to blame other people or external factors. He made one big don’t-try-this-at-home pharmacological choice during therapy that I think could have gone catastrophically wrong. It apparently didn’t and I wonder why.
One person found this helpful

Movies R UsReviewed in the United States on December 30, 2020
3.0 out of 5 stars
WHAT LIES BENEATH THE EXTERIOR
Verified purchase
BEHIND THE SCENES REVEALS THAT CARY GRANT WAS A DEEPLY INJURED SOUL. HE
WAS HAUNTED BY HIS PAST RELATIONSHIP WITH HIS MOTHER WHICH CREATED A
LIFELONG SEARCH FOR ANSWERS TO HIS PSYCHOLOGICAL WOUNDS AS THEY
AFFECTED HIS PERSONAL LIFE. HIS MOTHER WAS UNJUSTLY TREATED BEYOND HER
CONTROL, A FACT HE NEVER KNEW UNTIL LATE IN LIFE.

THE DOCUMENTARY SEEMS MORE ABOUT HIS MENTAL HEALTH AND HOW IT AFFECTED
HIS RELATIONSHIPS. THE BIRTH OF HIS DAUGHTER AND BEING PART OF HER LIFE WAS
VERY SATISFYING TO HIM.

THE CAMERA LOVES HIM. HE HAS A STRONG STAGE PRESCENCE BUT IS LIMITED IN THE
ROLES HE CAN PORTRAY BECAUSE HE IS ONLY SUITED TO CERTAIN ROLES. HE COULD
NEVER TAKE ON A CHARACTER OTHER THAN A VERSION OF HIMSELF. HE BASICLY HAD 2 SETTINGS THAT WERE EXACT OPPOSITES, FUNNY OR SOPHISTICATED. IT IS DIFFICULT
TO SEPARATE HIS PHYSICAL APPEARANCE AND FACIAL EXPRESSIONS FROM HIS ACTING
ABILITY. FORTUNATELY HITCHCOCK LOVED HIM AND HIRED HIM FOR MANY MOVIES.
One person found this helpful
See all reviews
Back to top
Get to Know Us
Make Money with Us
Amazon Payment Products
Let Us Help You
EnglishChoose a language for shopping. United StatesChoose a country/region for shopping.
© 1996-2021, Amazon.com, Inc. or its affiliates