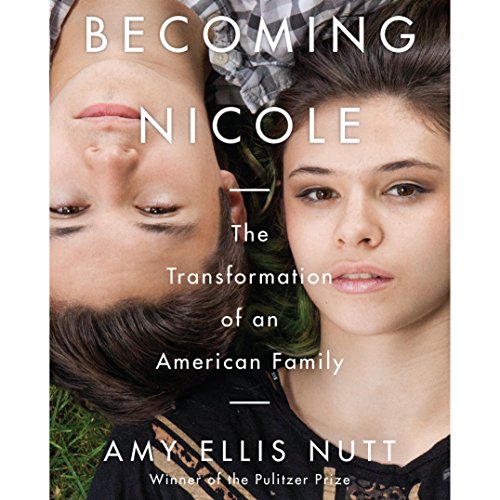 Becoming Nicole: The Transformation of an American Family

The inspiring true story of transgender actor and activist Nicole Maines, whose identical twin brother, Jonas, and ordinary American family join her on an extraordinary journey to understand, nurture, and celebrate the uniqueness in us all.

When Wayne and Kelly Maines adopted identical twin boys, they thought their lives were complete. But by the time Jonas and Wyatt were toddlers, confusion over Wyatt’s insistence that he was female began to tear the family apart. In the years that followed, the Maineses came to question their long-held views on gender and identity, to accept Wyatt’s transition to Nicole, and to undergo a wrenching transformation of their own, the effects of which would reverberate through their entire community.

Pulitzer Prize-winning journalist Amy Ellis Nutt spent almost four years reporting this story and tells it with unflinching honesty, intimacy, and empathy. In her hands, Becoming Nicole is more than an account of a courageous girl and her extraordinary family. It’s a powerful portrait of a slowly but surely changing nation, and one that will inspire all of us to see the world with a little more humanity and understanding.

A Stonewall Honor Book in Nonfiction

Finalist for the Lambda Literary Award for Transgender Nonfiction

“If you aren’t moved by Becoming Nicole, I’d suggest there’s a lump of dark matter where your heart should be.” (The New York Times)

“Exceptional... ‘Stories move the walls that need to be moved,’ Nicole told her father last year. In telling Nicole’s story and those of her brother and parents luminously, and with great compassion and intelligence, that is exactly what Amy Ellis Nutt has done here.” (The Washington Post)

“Becoming Nicole is a miracle. It’s the story of a family struggling with - and embracing - a transgender child. But more than that, it’s about accepting one another, and ourselves, in all our messy, contradictory glory.” (Jennifer Finney Boylan, former co-chair of GLAAD and author of She’s Not There: A Life in Two Genders)

Special invitation from Audible!
Learn more about Membership
List Price: $24.50
You Save: $3.55 (14%)
By completing your purchase, you agree to Audible’s Conditions Of Use
Sold and delivered by Audible, an Amazon company
Share

4.6 out of 5 stars
4.6 out of 5
1,012 global ratings
How are ratings calculated?
To calculate the overall star rating and percentage breakdown by star, we don’t use a simple average. Instead, our system considers things like how recent a review is and if the reviewer bought the item on Amazon. It also analyzes reviews to verify trustworthiness.
Top reviews

Amazon Customer
5.0 out of 5 stars Great Introduction to Transgender Issues and Families
Reviewed in the United States on October 22, 2015
Verified Purchase
I really enjoyed this book, and it made a day of travel pass very quickly.

Two things in this book really struck me. First, I think it’s easy to view those who actively defend LGBTQ rights as crusaders and zealots. The truth is that they are a patchwork of people who – by and large – have been forced to examine their own viewpoints and carefully consider the status quo when it comes to opportunities for and treatment of the LGBT community. Many have not done this simply because it interested them, but because they were faced with the reality of being or loving someone who does not conform to the rigid gender norms that have been laid out for us culturally. Though I have long identified as someone on the left of the political spectrum, I struggled mightily when my child began identifying as the opposite gender, and it has been a continual learning process. And while Nicole’s father Wayne and I began on opposing ends of the political spectrum, I identified with him in so many ways throughout this book, and his journey felt very familiar to me. I am immensely thankful to books like this and the plethora of organizations and media attention this issue has garnered over the past 5-10 years, as they are truly invaluable to families like ours trying to better understand our children and learn how to stand up for them at school and in society.

Second, I am continually amazed by children and their unquestioning acceptance of people who differ than them, but at the same time saddened and frustrated by some groups’ stubborn insistence on labeling transgender individuals as sexual deviants. This abominable behavior was on full display throughout the second half of this book and I find it infuriating. As a reminder, these are children we are talking about – many as young as 3, 5, 7, 10 years old. They are not predators. They are not a danger to others. They are children and they deserve to be loved and cherished. Please stand up against the perversion of religion to preach hate about children – the day that is achieved cannot come fast enough.
I am very lucky to have a partner in my life similar to Nicole’s mom Kelly, who has strongly supported my child every step of the way, and was a rock before I could be. They once said to me “Just think: this experience will make us stronger, will make us better.”

C. Aleo
4.0 out of 5 stars I'd challenge anyone who thinks it's a choice to read this book
Reviewed in the United States on April 30, 2019
Verified Purchase
Becoming Nicole: The Transformation of an American Family is an excellent, if super-dense read. Ostensibly, Amy Ellis Nutt's book takes the reader through the transition of actress Nicole Maines. Maines was the Susan Doe at the center of one of the seminal court cases regarding how transgender students were being discriminated against in school, and her family's journey to the point of being willing to be standard bearers for the rights of transgender students is a fascinating one.

Ellis Nutt pulls no punches in describing the struggle of Maines' father to come to terms with his daughter being transgender, making him a very human and relatable character. And the family's sacrifices when it came to making sure both Nicole and her identical twin brother Jonas were happy and safe are staggering, and demonstrate the length parents will go to in order to protect their children, even, in their father Wayne's case, when he wasn't entirely sure he was able to accept Nicole's transition.

The book, however, isn't solely about Maines' journey to actress and activist. Ellis Nutt also includes an extensive amount of research and science regarding transgender individuals, legal history, and ongoing politics surrounding the transgender community. I'd challenge anyone who thinks it's a choice to read this book and still feel the same way.

Where I struggled with the book was with the portion leading up to Nicole's legal name change. While it is understandable that a story that begins with her birth would, by necessity, have to contain her dead name, it was difficult getting through sections where she had already asserted herself as female, and she was dressing and presenting as female, but the author continued to use male pronouns. It creates a dissonance that's very distracting as a reader, but that may just have been a personal issue, and as I am not transgender, I can't speak to that aspect other than my own experience.

Overall, however, this is an excellent book, and does a fantastic job walking readers through all aspects of Nicole's experience, both personally and politically.
Read more
11 people found this helpful
Helpful
Report abuse

Retired Teacher Barb
5.0 out of 5 stars It Opened My Eyes
Reviewed in the United States on June 28, 2018
Verified Purchase
As an older conservative person, I found myself wondering about transgender issues, yet I was convinced parents should not encourage a child to behave in a manner inconsistent with his/her birth gender. And it says in the book that for many children it’s a phase they grow out of. However, if the child is Wyatt, obviously it was not a phase and I have to admire the parents for making such difficult decisions, facing public scrutiny and certainly backlash, and admiring both children for their bravery. I came away convinced that there are at least some, and maybe all, transgender people for which it is not a choice; it is simply correction of a physical birth anomaly.
Read more
21 people found this helpful
Helpful
Report abuse
See all reviews

Christopher Keddie
5.0 out of 5 stars An extraordinary story about a relatively normal family.
Reviewed in the United Kingdom on July 29, 2020
Verified Purchase
This book is really well written and so insightful. I became aware of Nicole Maines through watching the CW series "Supergirl". As the world's first live action trans-gendered super hero, Nicole has had some amazing story lines and I have since started following her on Instagram. She is an incredibly passionate individual with a strong sense of justice, so when I learned about this book I had to read it. I was not disappointed! Nicole's entire family have an amazing story to tell which ultimately can be summarised as the importance of family, accepting your loved ones for who they are, and having their back when they really need you. I cannot recommend this book enough!
Read more
Report abuse

JodiR
4.0 out of 5 stars 3.5 out of 5 stars
Reviewed in Canada on February 1, 2016
Verified Purchase
Issues of gender identity may have been in the news of late, but without close friends or colleagues who identify as trans, it was still a confounding topic to me. And for anyone who has had similar thoughts, you couldn't find a more compassionate, thought-provoking work than Becoming Nicole. Part family drama, part science/history lesson, the author profiles a child from birth through high school and brings the reader into Nicole's mindset. Nutt's simple language is truly eye-opening and the Maines family inspiring. Well-researched, the author's sensitive treatment of the family is remarkable, and she even includes a glossary of correct terms in defining gender v. homosexuality, bisexuality, cross-dressing, and other terms or practices often confused with gender identification.

The participation and courage of the family in sharing this part of their lives so intimately with the author is also commendable and it is an interesting and enlightening story but I wish the story was told more from the voices of the family and not the author. The author’s viewpoint had the tendency to become tedious (for lack of a better word) at times and I am sure the firsthand experiences of the family members would have been far more interesting.
Read more
3 people found this helpful
Report abuse

J,. Saenz Fernandez
5.0 out of 5 stars Fascinating
Reviewed in Italy on September 18, 2021
Verified Purchase
Once you start reading this book you will not stop.
Very engaging and moving, it illustrates the making of an extraordinary person.
Thanks Nicole for sharing your story, this is no doubt helpful in many ways!
Read more
Report abuse
See all reviews
Back to top
Get to Know Us
Make Money with Us
Amazon Payment Products
Let Us Help You
EnglishChoose a language for shopping. United StatesChoose a country/region for shopping.
© 1996-2021, Amazon.com, Inc. or its affiliates