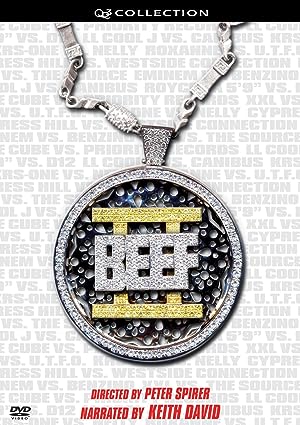 (37)
6.81 h 25 min200413+
Thoughtful, unbiased and entertaining Hip Hop journalism brings new beefs in the game as artists call out the real gangstas in hip hop. From labels and lawyers to managers and media, see the battles that often rage behind the scenes in the music business.

Ihye JayeReviewed in the United States on April 9, 2005
5.0 out of 5 stars
Know the history of the culture of hip hop
Verified purchase
I find it very interesting that people rated this documentary so low. It's obvious that they are looking for something instead of accepting it for what it is. I applaud Q3 for his efforts because he kept it true to the culture of hip hop and its historic events.

The segment on "Roxanne" may be uninteresting to those who didn't live through that era, but those of us who did remember how large those records were and even though it was "Beef", it remained on record and never indicated the taking of anothers life. The younger generation is being drawn towards extreme violence because of what the music industry has done to hip hop in order to sell records.

Many have forgotten EPMD, (which is without a doubt, one of the all time greatest hip hop groups) and how "Business" ended their reign is given it's due in this segement. EPMD produced the Hit Squad (which would have rivaled the WU..yes I said it)Redman, Keith Murray, Das EFX, K-Solo, Molly G, with Sermon on the boards? Just think...

Ice Cube is a staple in hip hop history. The Cypress Hill "Beef" was major because of the magnitude of people that could have gotten involved. I can respect the Hill, but Cube has always been a Chameleon in hip hop. From the Bomb Squad to "hip hop started in the west"...Those who know..Know.

It goes on and on with through breakdown of several historic battles. The Nelly/KRS battle is the crux of hip hop's dilemia. The corporation/hip hop culture battle. The corporation has packaged hip hop into what the youth perceive it as...Nelly..when it is the culture of those that lived it that created hip hop...KRS. Who you believe won the battle determines which aspect of hip hop your connected to.

I failed to mention the LL/Canibus or the Royce 5'9/D12 issue, but they are done just as well. Perhaps the most ironic victor of all these battles is Roxanne Shante. You will have to see the DVD to understand my point.

Bottom line this is a wonderful addition to the first. All of these DVDs will be of the utmost importance as the years go by. Those of us that understand the "culture" understand that it needs to be maintained. Q3 has played his part in that. To the critics..what have you done?

TrellReviewed in the United States on January 20, 2013
4.0 out of 5 stars
What's beef?
Verified purchase
Giving it 4 stars because the more Beef dvd's they release, the less appealing they become. First one gets 5 stars, second one gets 4 and....well...u get the point.

Jordan LeeReviewed in the United States on June 10, 2013
5.0 out of 5 stars
great documentary
Verified purchase
I love documented film. Especially if it pertains to music. Music is my life and not a day goes by that I listen to some music. My favorite kind of music is rap, rock and a little country. I like to know about music, buy this.

DeShawnReviewed in the United States on February 5, 2013
3.0 out of 5 stars
Okay
Verified purchase
I have seen this beef dvd before, not the best of the series to me, it was a okay movie

MissAReviewed in the United States on August 20, 2007
3.0 out of 5 stars
Even stars have beef....
Verified purchase
If ya wanna see who does and doesn't, watch this. Chances are you will learn something new.
See all reviews
Back to top
Get to Know Us
Make Money with Us
Amazon Payment Products
Let Us Help You
EnglishChoose a language for shopping. United StatesChoose a country/region for shopping.
© 1996-2022, Amazon.com, Inc. or its affiliates