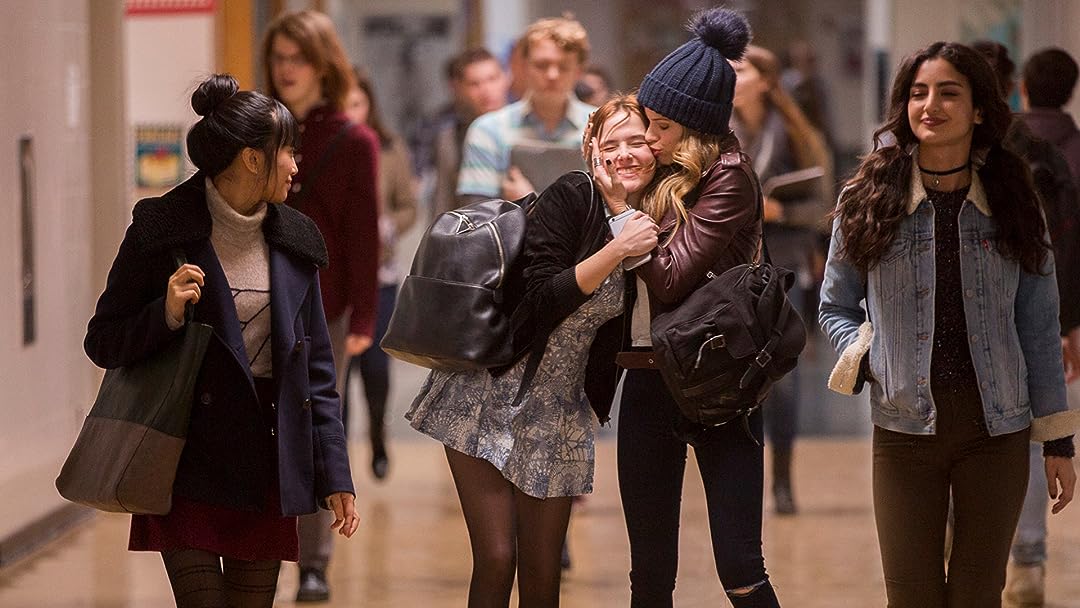 (1,574)
6.41 h 39 min2017X-RayPG-13
A girl repeats the last day of her life over one mysterious week—untangling the secrets of those closest to her and discovering the power of a single day to make a difference.

gtrReviewed in the United States on December 19, 2018
1.0 out of 5 stars
Groundhog Day without wit, and Edge of Tomorrow without thrill
Verified purchase
You watch the least unlikable of four extraordinarily unlikable rich girls trying to save them from being killed at the end of a very, very tedious-to-watch day, including some simplistic, overly obvious pseudo philosophy ("Sisyphus!" "The Butterfly Effect!"). Even worse than questionable (over-)acting and awful writing was, to me, how everyone was, and clearly looked, about 10 years older than their characters are supposed to be. I do not understand why big budget Hollywood keeps doing this.

CristinaReviewed in the United States on January 17, 2019
1.0 out of 5 stars
[SPOILERS] The only good line in the entire movie: "I'm in heteronormative hell."
Verified purchase
I honestly don't remember ever watching another movie where ALL of the main characters are so unlikeable and just plainly unintelligent like this. Bland white girl with zero personality, other than that she succumbs easily to peer pressure and has horrible taste in music and friends, slowly begins to realize that she and all of her vapid friends are terrible people after being forced to relive the same day over and over. Because you know, god forbid a high schooler have a sense of self-awareness without being induced by some kind of crisis. Soooo many terrible and heteronormative stereotypes, I was cringing all the way through...the drinking and partying and talking about hooking up 24/7. I'm not even conservative, but it's like really?? Your entire life revolves around that? Pathetic.

Even her parents were low on the IQ scale. Father is the usual doormat. And her mother is just as shallow as she is. "Oh, you're so lucky you're popular. When I was I senior I hadn't even been kissed yet." *pouting face emoji* *sad face emoji* I thought my eyes were going to roll back into my skull. Yeah, cause what matters in high school is being popular...not gosh, I don't know, doing well in school and getting into college or having some kind of future plan for yourself. *FACEPALM*

It wasn't any better plot-wise. Sam claimed she was "changing things" every day...yet every day showed her doing the same exact thing repeatedly. And instead of having some self-awareness and growing a backbone to stand up to her vapid friends, she decided the best use of her time would be to be a "rebel" and try to seduce her teacher in the middle of class. ERROR 404: LOGIC NOT FOUND.

At the end, instead of getting Juliet proper help or standing up for her, Sam lets the situation implode (again) to the point where she decides to "sacrifice" herself as she pushes Juliet out of the way of the truck. It's obvious that the movie isn't supposed to make you care about Juliet herself. Rather, you're only supposed to care about Sam's "redemption" and the end paints some kind of rosy, peaceful image of her death while completely disregarding the fact that nothing has changed for Juliet's situation and now she'll likely be blamed for Sam's death.

The movie tries to show that "one day can change everything" or "little things can make a difference" and whatnot, but that message was rendered pointless by the end, since Sam was the only character that knew what was happening and changing...again, literally making the entire movie about her lame 'redemption." Despite any comments she may have made to anyone, no one else in the movie seemed to change or grow a moral backbone, and again, the film disregards any kind of consequences for the ending.

If you want to do a character study-type film focusing on one character's arc, that's fine, but then make sure you actually give that character a personality and make them complex. There was absolutely nothing complex about Sam. She's a vapid teenage girl with no self-awareness or backbone that will apparently do anything to be "popular" including participate in bullying and letting her pathetic excuse for a boyfriend drunkenly assault her.

Idk anymore, I need to take a nap after this. My brain is exhausted by this drivel. I do not recommend this movie. Watching puppy videos online is a much better use of your time.

TomReviewed in the United States on May 16, 2017
5.0 out of 5 stars
Five Stars!
Verified purchase
I really can't overstate just how ridiculously awesome this film is. There's a bit of the Groundhog Day scenario, where high school mean girl “Sam” is forced to relive the day she died over and over again, but that's where the comparison ends, as it becomes a powerful drama about trying to remedy a lifetime of wrongs in a single day.
61 people found this helpful

AReviewed in the United States on June 24, 2017
4.0 out of 5 stars
Really Lovely
Verified purchase
I'm not going to put any spoilers in this review, because, while certain plot elements feel familiar, there are surprises. The main premises in the film have been seen in other movies: Groundhog Day, Mean Girls. The premises work here for the same reasons they do there: they address the fundamental issues of life. What matters? Why are we here? What is the significance of this particular moment? What if this moment is all we have? What would you do or say and who would you be if you didn't have to worry about what other people think?

This is wrapped into a gorgeous move. The upper upper, pretty way upper middle class art direction is dead on. I loved the acting, cinematography, and soundtrack. The kicker is that I bought this by accident while navigating through my new blu-ray player. (It's smart - me, not so much). I love it. It is a movie about teenagers on the surface, but underneath, it's about all of us.
50 people found this helpful

DeziReviewed in the United States on July 3, 2017
5.0 out of 5 stars
Loved it
Verified purchase
First thing I should say is I have not yet read the book. So this review is based solely on the movie and is unbiased as to anything that may have been changed from the book.

I think my favorite part of this movie was watching the character evolve over the course of the movie as each day plays out differently. But even more important than that was the message it sent by the end of the movie about how the things you say and do to others can effect them. And unlike in this movie, you don't get a second or third chance to change how your day plays out to get the better outcome. So I think this is a good thing for people to watch. And I was completely caught up in how it was going to play out by the end, everything I guessed was wrong and the ending surprised me. It was well worth the watch. Very well done. And again, I haven't read the book to give any sort of review about how things could have been done better when it came to how it was originally written.
26 people found this helpful

Ace22Reviewed in the United States on July 8, 2017
5.0 out of 5 stars
Powerful message..Much more than i initially expected!
Verified purchase
This is a must see. The production quality and acting is good, but what makes this film outstanding is its surprisingly profound message. I watched this film not too long after the passing of a friend of mine, so it resonated and impacted me even more because of it. This film really puts life into perspective and is compelling...This is one of those films that can be life changing..
32 people found this helpful

Edward W. DuveyoungReviewed in the United States on May 30, 2017
5.0 out of 5 stars
Got heart? Prepared to be tugged....
Verified purchase
5-29-18 Oh grab a box of tissues and have at it. Very effective. Not funny. Much darker than Groundhog Day.....much sweeter too.
31 people found this helpful

J. KlimekReviewed in the United States on January 2, 2021
3.0 out of 5 stars
For Those Who Are Unsure What to Make of It by Other Reviews
Verified purchase
First of all, let me say I won't give spoilers, but it's not that hard to predict so don't expect much of a surprise, and it is not doing what it tries to do very well.

I watched this because I like the concept. Shows and films that do this can be interesting and take it different directions, which this succeeds at doing. I could not find much in the reviews to help me know what I'd think, so I"m giving this for those who are having trouble deciding like I did. Overall, I have to say it has its few gems, but it has too many flaws.

For the good parts... First, the acting is good at many points, particularly the main role. It is convincing enough. It portrays the immaturity and what it comes from in what they want to hide and ignore. Second, the development of the story works for the most part at showing the struggle of being mature under all of the influence and peer pressure. Though I would say it is missing a few things, in general, it works.

For the negatives... First, if you are one who cares a lot, there are many small flaws throughout the film. For the most part, it is due to them using the same shots in multiple days where smaller parts of it don't fit. Second, the writing that is there is at least decent, but it is lacking too much. Some parts of this that could have been much shorter only showed the repetition in the first half of the film. The latter repeats of it should have had more to it. What is there works for the most part, but it should have had much more. Third, the last part of the film does not quite work. The last line in particular does not fit because of how it treats a particular character as the driving force when they are possibly the smallest part of the story. Fourth, and most important to me, the theme is ultimately a mess. One side of it works, another does not, and together they create a mess. One talks about the importance of your affect. The other speaks of ignoring your faults to put focus on your good features. This bothers me because if you have a focus on others, you should not need to focus on your strengths because your focus is not on you...thus a paradox. Is your focus on others or yourself? Both does not work.

This is why I was disappointed. Some things were really good, and some things could have been so much better, but the weaknesses and flaws it had took away too much from the positives. It tried to be a more mature young adult flick, but it fell a little short.
See all reviews
Back to top
Get to Know Us
Make Money with Us
Amazon Payment Products
Let Us Help You
EnglishChoose a language for shopping. United StatesChoose a country/region for shopping.
© 1996-2022, Amazon.com, Inc. or its affiliates