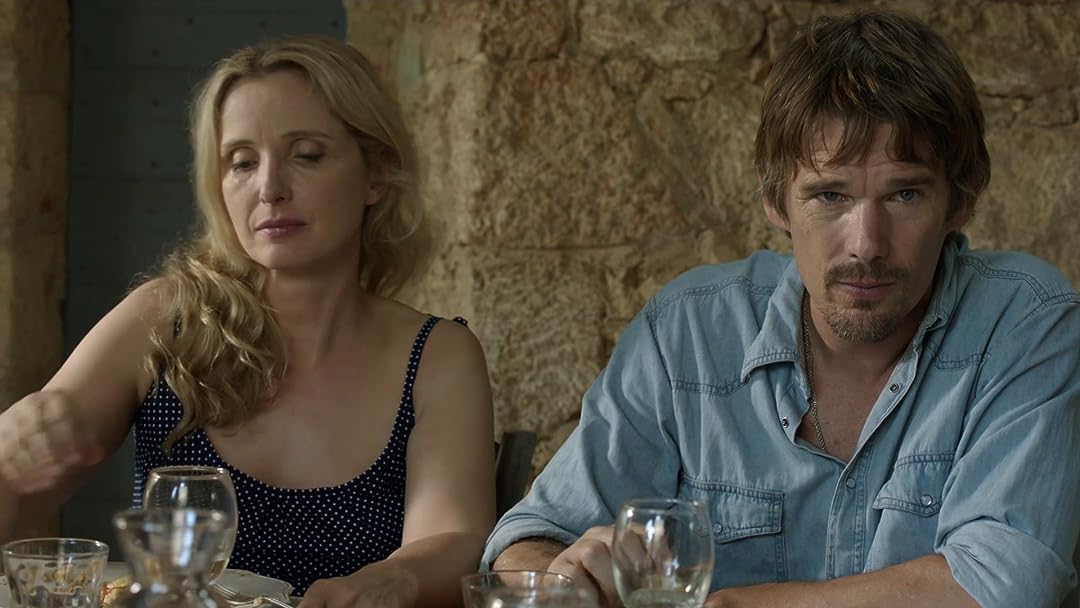 (2,288)
1 h 48 min2013X-RayR
Nearly 20 years since Jesse (Ethan Hawke) and Celine (Julie Delpy) met, they reminisce about their lives together and what different choices might have brought.

MacroVReviewed in the United States on April 17, 2020
5.0 out of 5 stars
May be the best of the three
Verified purchase
I saw Before Sunrise when it came out in 1995 and Before Sunset not long after it did. Watched those two with my sons (not born when Before Sunrise came out) recently, and then Before Midnight. In some ways it's the best of the three. The climactic fight near the end rang so true for me, married nearly 20 years. Celine complaining about how she never has time to do things she likes, Jesse saying "make the time." Many times where you think to Jesse: "Dude, don't SAY that!" And Celine being the one, it seems to be, who commits the cardinal offense: saying something you can't take back. But you relate to the struggles both of them face.

This is not some sweet, commercial rom-com. You watch it for the near-constant dialogue - seemingly improvised but thoroughly rehearsed, nearly every word and action spot-on. Another (one-star) comment said it seemed to prove what they said in the first film: after a while you'll probably tire of the other. Indeed. That's what happens when young romance turns to long-term love and commitment.

Now there's speculation on whether there will be a fourth film. I'm not sure where they would go after this one, but it would quite something if they could top it.

Kraig SolomonReviewed in the United States on October 28, 2019
5.0 out of 5 stars
An excellent continuation of the story
Verified purchase
I read a few negative reviews, and noted that this was not as well received % wise. But, the conflict that does arise in the dialogue is an inevitable part of life, and I was glad to be able to see it play out. Spoilers
: Others mentioned that 'he cheated' but, he never does agree that he did. So, although it's insinuated that there was infidelity at one point or another on both of their parts, the conversation as always in this series of movies carries the plot to a beautiful point.
If all you are looking for is a fairy tale, then by all means don't watch this one. But, if you can handle a bit of real-life situations tossed into the mix then I'd recommend it highly.

ThisGirlReviewed in the United States on January 24, 2019
1.0 out of 5 stars
If you liked Before Sunrise & Before Sunset, DON'T WATCH THIS
Verified purchase
If the first two movies gave you hope about connections that last a lifetime, this movie will kill that hope and reduce it to a simple fairytale and wishful thinking.

Spoiler Alert: He cheats on her. So much for true love and romance. Maybe they had it right in the first movie when they said eventually they'd get tired of each other and begin to resent each other. But we don't need to watch a movie about that, do we? We know plenty of couples that resemble that. What a waste of $ and time.
16 people found this helpful

Kristy FarrellReviewed in the United States on January 10, 2021
3.0 out of 5 stars
Least favorite of the 3
Verified purchase
So many things just don't add up, to things that are easy to get over like in the book Jessie writes he writes about what happened after he misses his plane, I don't believe he would have done that, he as a writer we are told likes to keep things open-ended, so that doesn't track with what he know about him.

Also he cheated on her after she just gave birth to their twins and was struggling alone in France, really? we are just supposed to ignore that because he doesn't want it to "disqualify him?"

Also hate how she is turned into this angry shrew and he still gets to be mostly charming, I hate when they do that to female characters, and every time he called her crazy i wanted to throw something at him.

It is not impossible to have a loving and respectful relationship, I am lucky my parents have had one for 30plus years I know they are in the minority, I don't know if I'll even be lucky enough to have that. I have seen them fight and makeup but there are lines you don't cross and they seem to barrel into them here just so they can say they did something brutally honest, but the thing with brutal honesty is that brutality is given way more of the emphasis than the honesty.

It seems Ethan Hawke and Julie Delpy wrote this more about themselves than their characters and it was felt, this didn't feel like watching Jessie and Celine.

I waited so long to see this film because I was worried it would do exactly this and just mar the experience of the first two perfect films. If you are in the same boat, learn from me and don't watch at least not past the time they get to the hotel.
3 people found this helpful

D. BullardReviewed in the United States on March 2, 2018
5.0 out of 5 stars
My favorite in the trilogy :)
Verified purchase
This movie is not for everyone and I will say that women will probably like it more than most men because there is zero "action" and is primarily a dialogue movie. But if you have seen the previous two movies in this trilogy and enjoyed them, this is a must see! Also a good study of relationships and marriage and how when the years wear on, you can start taking each other for granted once that initial "magic" of a new relationship is gone. The acting by everyone in the small cast is great and comes off very naturally, but the best part of the movie for me is the second half which is almost entirely dialogue between Ethan and Julia's characters. Some great writing, great acting--tense scenes--but ultimately a pleasant ending, that makes me wish there would be a fourth to see what happened next.
13 people found this helpful

AmazoncustomerReviewed in the United States on January 26, 2019
5.0 out of 5 stars
great dialogue; tough but fascinating and realistic follow-up to Jesse and Celine’s relationship
Verified purchase
This is a hard movie to watch especially after seeing the first two. It really goes into how the relationship has changed between Jessie and Celine. The dialogue is surprisingly realistic and the fights and arguments are really well done. Although it may not be the Happy ending that people may be wanting or expecting it is more realistic and stays true to the characters. i’d highly recommend checking out the interviews that the director and the two actors are in. It’s really interesting to see the process that have gone involved in each of these movies. i’m really hoping that they continue to make a new movie as a follow-up, possibly in there later ages where they are in a different phase of their life and relationship.
9 people found this helpful

M. HarrisReviewed in the United States on November 23, 2020
3.0 out of 5 stars
I love the "Before" Movie Universe
Verified purchase
I saw Before Sunrise before I knew there were 2 others in the trilogy. I could have listened to these two characters talk for hours. They're so engaged, you'd think the dialogue was improvised--it's that natural. The same with Before Sunset, which is my favorite. The way he looks at her all through the movie is just . . . !!!!!!! I'd love a partner to look at me like that! Before Midnight is a hard to watch, considering how the relationship has changed. Celine's discontent is like poison, justifiable or not. Is this the inevitable dynamic change in all romantic relationships? Hope not. You want them to succeed, and who knows? Maybe they will, though the last scene is trite and left me disappointed and annoyed. Another thing I found annoying was the soundtrack!!! The other two movies didn't have incidental music, which gave them a certain spontaneity--or the illusion of spontaneity. In ". . . Midnight," it's as though the director thinks he has to entertain us with music because he doesn't trust the writing or performances. Check it out, though. You may like it.

CarolineReviewed in the United States on December 9, 2021
2.0 out of 5 stars
Dialogue not as good as previous films.
Verified purchase
The previous films in this series were full of philosophical, existential, and culturally relevant discussions about peoples' shared experiences on this planet, as well as different perspectives and experiences as men, women, Americans, Europeans, etc. In Before Midnight, the dialogue meanders about for the first 3/4 of the film, covering subjects that are somewhat interesting, but don't have the depth of the previous movies. Then in the last 1/4, it's like the screenwriters realized all the things they didn't get to yet, and crammed in many of the most interesting topics. But there was no discussion of them -- they were only touched on briefly. Such topics included Jesse's ideas about fidelity (a dalliance shouldn't matter if your love and life are committed to someone else) and Celine's points about women's burden of invisible emotional labor in marriages. These would have been great ideas to cover with these characters, but instead they were hurled as back and forth as insults with no deeper exploration or discussion. Considering that it had been 9 years since the previous installment, I'd think the Richard Linklater, Julie Delpy, and Ethan Hawke would have had enough time to revise the script. Instead, this feels like a rough draft.
See all reviews
Back to top
Get to Know Us
Make Money with Us
Amazon Payment Products
Let Us Help You
EnglishChoose a language for shopping. United StatesChoose a country/region for shopping.
© 1996-2022, Amazon.com, Inc. or its affiliates