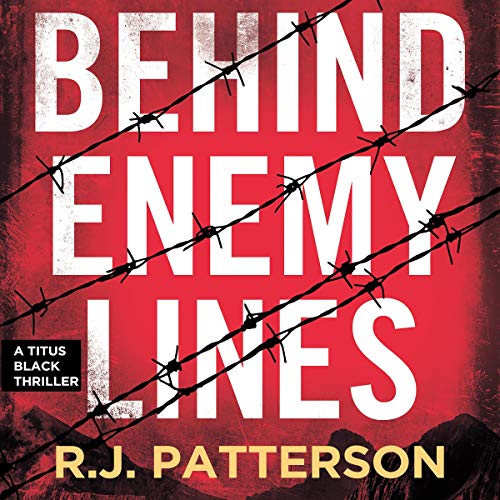 R.J. Patterson (Author, Publisher), Kyle Tait (Narrator)
4.1 out of 5 stars 1,550 ratings
See all formats and editions
Sorry, there was a problem loading this page. Try again.

Titus Black is a survivor.

Even after getting ousted from the CIA, Black managed to land on his feet. And while his government may have quit on him, he’s not about to quit on it...even when he’s falsely accused of murder....

When black ops agent Titus Black embarks on a rescue mission, he comes back with more than just a left-for-dead pilot - he comes back with questions about an alleged secret operation that threatens to shatter trust in the U.S. military. As Black and the clandestine organization he works for start to unravel the mystery, he finds himself caught in the crosshairs of a plot to silence him.

But if Black intends on getting justice and exposing the corruption, he must avoid capture and save the one man who wants him dead more than anything...the President of the United States.

Grady Harp
5.0 out of 5 stars A new thriller Hero!
Reviewed in the United States 🇺🇸 on October 13, 2019
Verified Purchase
Pacific Northwest author Jack Patterson writes with the verve that accompanies good journalism: he has written articles for some of our major newspapers such as The New York Times and is the recipient of many journalistic awards. That acumen is evident in his book THE WARREN OMISSIONS (five have dealt with sports, Patterson's obsession since childhood), a mystery thriller with the JFK assassination and controversy at its core. Continuing his highly successful thriller series, each series named for the chosen title character, Patterson opens his new series – a Titus Black Thriller, Book 1 – and we are introduced to yet another ongoing highly skilled creation of a character that we want to follow. Titus Black is a black ops agent whose skills and derring-do match any of those committed to books to this date – he explores possible secret operations to upend corruption.

One of the many positive aspects of Jack Patterson's books is ability to engage the reader from the first paragraph and then sustain that level of interest until the story is complete. Nowhere is that gift more important than in writing mystery thrillers. For a taste of this new series (a very timely one), the opening of the book follows: ‘Titus Black checked all his scuba gear one final time as the lockout trunk filled up with water. He took a deep breath to calm his nerves. Missions that involved time in the ocean ranked last in his list of favorite assignments. “How are you doing in there?” asked Christina Shields, Black’s handler at the secret black ops program Firestorm, in her sultry voice. “It’s a day at the beach,” Black said. “For most people, that’d be a good thing,” she said. “But I know you’re not like most people.” “Give me a mountain with five hostiles on the ridge any day.”’ And in that short opener Patterson has our complete attention held to the last page.

The synopsis: ‘Titus Black is a survivor. Even after getting ousted from the CIA, Black managed to land on his feet. And while his government may have quit on him, he’s not about to quit on it … even when he’s falsely accused of murder …When black ops agent Titus Black embarks on a rescue mission, he comes back with more than just a left-for-dead pilot—he comes back with questions about an alleged secret operation that threatens to shatter trust in the U.S. military. As Black and the clandestine organization he works for start to unravel the mystery, he finds himself caught in the crosshairs of a plot to silence him. But if Black intends on getting justice and exposing the corruption, he must avoid capture and save the one man who wants him dead more than anything … the President of the United States.’

Ron
4.0 out of 5 stars Tutus Black
Reviewed in the United States 🇺🇸 on January 20, 2023
Verified Purchase
As hero's go Tutus does not hold up with other heroes in fiction books. The story was weak and the ending not believable. I gave the book 4 stars as parts were enjoyable. Perhaps Shields should play a bigger role in future books.
Read more
Helpful
Report abuse

Hendricks Book Reviews
3.0 out of 5 stars …decent espionage thriller that was entertaining.
Reviewed in the United States 🇺🇸 on November 2, 2021
Verified Purchase
Book Review - Titus Black, a covert black ops operator in R.J. Patterson’s “Behind Enemy Lines,” is a ‘do whatever it takes’ type of survivor. Even after getting ousted from the CIA, Black manages to land on his feet, which many former covert operators have difficulty doing without turning ‘bad.’ While his government may have given up on him, Black refuses to quit on his country. When tasked with a left-for-dead mission - Black comes back with questions about an alleged secret operation that threatens to shatter trust in the U.S. military. As he and the clandestine organization that he is now working for start to unravel the mystery, Black finds himself caught in the crosshairs of a plot to silence him, permanently! R.J. Patterson takes the reader on a fast-paced, mystery thrill read in the first book in the Titus Black thriller series. This story moves along at a ‘zippy’ pace and doesn’t waste any time in telling its story. It’s only 310 pages so Patterson gets to the point quickly and doesn’t look back. This is not a major detailed-laden espionage action thriller, but still a decent read. It’s more like a short spy thriller read on training wheels. No complex twists and turns just a standard espionage tale that is short, sweet and entertaining. I wasn’t expecting anything extraordinary and yet I was still pleased with the plot, the characters and the storyline. If interested in a short and not so complex espionage story, check out R.J. Patterson’s Behind Enemy Lines. Again, not anything special but still entertaining to read.
Read more
One person found this helpful
Helpful
Report abuse

Phil Bolos
5.0 out of 5 stars Fast and intense
Reviewed in the United States 🇺🇸 on October 14, 2019
Verified Purchase
Behind Enemy Lines by RJ Patterson is the first in a series of novels that introduces us to the hero, Titus Black. Black is a CIA operative who has been sent behind enemy lines in order to find and rescue a downed air force pilot. He finds his man, but in the process of getting him to safety, comes across another operation taking place; an operation that he was never meant to see. Now, on the run from the organization that he has worked for for most of his life, Black has to stop doing investigations in order to find out what was going on and why the CIA wants him 6 feet under the ground. To make matters worse, it appears Black will have to go all the way to the President if he hopes to get any answers.
Patterson has created a new character who takes us on an amazing thrill ride. Titus is clever, fast, strong, and a bit of a loose cannon. He is highly dedicated to his country and will work, even against his own organization, to keep his country and his people safe. The novel is well written and the characters are well developed. The settings are nicely described which makes visualizing the events easy for the reader. I look forward to the next installment in the series and where the character will take us next.
Read more
17 people found this helpful
Helpful
Report abuse

marcia
4.0 out of 5 stars First one in series
Reviewed in the United States 🇺🇸 on January 22, 2022
Verified Purchase
I look forward to the next book in the next one. Titus Black and his co-north, and handler Christina Shields, are part of a black ops secret network called Firestone. While they are Investigation of government corruption, he manages to get blamed for murder. Then he saves the president’s life, but is arrested by the FBI.
Read more
Helpful
Report abuse
See all reviews

Amazon Customer
5.0 out of 5 stars Titus Black
Reviewed in the United Kingdom 🇬🇧 on October 10, 2019
Verified Purchase
I haven't read any of his adventures before, but what a story, I was held until the end, never knowing how it would turn out, but I was not disappointed. A thoroughly first class read, I recommend it to anyone who enjoys a very unputdownable (if there is such a word) book and is prepared to lose sleep over it
Read more
2 people found this helpful
Report abuse

J. M. Craig
1.0 out of 5 stars Don’t Bother!!
Reviewed in the United Kingdom 🇬🇧 on June 17, 2020
Verified Purchase
Awful ! Reads like a children’s super hero comic. Gave up after 3 chapters, should have believed a previous reviewer !!! Puerile 👎
Read more
One person found this helpful
Report abuse

S D Hodgson
4.0 out of 5 stars Ok book
Reviewed in the United Kingdom 🇬🇧 on February 23, 2021
Verified Purchase
An ok book I finished because I was curious about the ending. It got better as the book went on but simple mistakes have been left in text. Will probably read the next book to see if the author has settled into the story
Read more
Report abuse

Brian Jeffrey
4.0 out of 5 stars A good thriller but...
Reviewed in Canada 🇨🇦 on July 9, 2020
Verified Purchase
While the story is fast paced, the premise is a bit thin and implausible in parts, particularly the ending. While I understand the need to set the scene for future Titus Black stories, the manner in which it was done just didn't ring true for me. While the author in on my "read more" list of authors, I may move him to my "maybe read more" list if the next book is the same as this one.
Read more
Report abuse
See all reviews