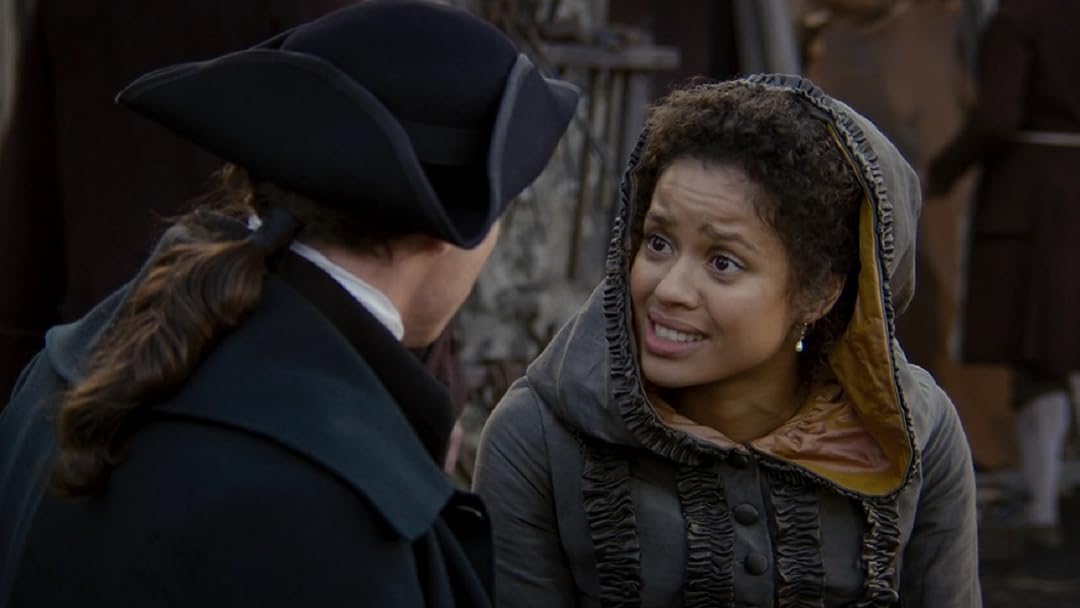 (5,684)
7.31 h 43 min2014X-Ray13+
Tom Wilkinson, Emily Watson and newcomer Gugu Mbatha-Raw star in this poignant drama inspired by a true story about a mixed-race woman who seeks love and justice amidst racism.

MandisaReviewed in the United States on August 20, 2017
4.0 out of 5 stars
A Modern Masterpiece
Verified purchase
I have to be honest. I did not expect to love this film as much as I did. I watched it because I am considering putting it on my syllabus for a course I will be teaching this semester. I was blown away by it. It was so carefully written, beautifully directed and masterfully acted. Though I am pretty sure a lot of artistic license was taken in the making of this film, this is a story that needed to be told. So much of the repertoire of films on Black history and the history of trans-Atlantic slavery is dominated by the experiences of African Americans and Afro-Caribbeans to a lesser extent. We also often forget that though the most oppressed were/are Black people who were not evidently mixed, biracial people also are a part of that history. While Dido Belle's story may have been unique it brings up so many matters of race and gender whose importance move beyond her particular story (or the filmmakers' interpretation of her story). My only slight dissatisfaction is that I yearned to see a bit of her mother's story if only for a few minutes, as well as some representation of the victims of the Zong massacre. But I guess this might also be the film's strength: that it makes me want to know so much more and drives me to do research on what I don't know.
89 people found this helpful

Sense and SensibilityReviewed in the United States on October 1, 2017
5.0 out of 5 stars
A beautiful costume drama in the style of Howard's End and Room With a View, set in Kenwood House in Hampstead in London:
Verified purchase
This is a beautiful period drama based on the true story of the daughter of a slave and a British aristocrat who brought his child to England to be raised by his uncle, a distinguished British jurist, Lord Mansfield of Hampstead, who was married but he and his wife had no children. The uncle raised Belle in the manner of upper class girls with her cousin Elizabeth, who was also his charge. They were like sisters, an unusual situation with Belle's African heritage, but Lord Mansfield even had a painting made of the two girls together celebrating their bond. Lord Mansfield would eventually rule on a landmark legal case that would contribute to the abolition of slavery in England, and Belle would marry a British gentleman and vanish into private life. This film is the story of how these events might have happened.
23 people found this helpful

G. RomeroReviewed in the United States on May 26, 2016
5.0 out of 5 stars
A sigh of relief!
Verified purchase
I'm always afraid when I watch these types of films that the writers'/directors will take it down a road I won't like, so the first time I watch them I'm always on edge thinking "Oh, please don't do this" or "Please don't say that" thinking that at any moment something will happen and it's going to ruin the storyline for me. I was very happy that this was not the case with Belle. I think I actually sighed with relief at the end of the film content with the execution. In my humble opinion it was a well made movie. Though somewhat predictable, it was very satisfying in it's simple delivery, with a good mixture of entertainment and history. I very much enjoyed the characters and their relationship through the film, in particular the relationship between Dido and her "Papa". Overall, a satisfying film.
27 people found this helpful

Boston FellowReviewed in the United States on November 29, 2017
5.0 out of 5 stars
A History Film to Watch for Today's News
Verified purchase
An incredibly well written, acted and produced film. Great and famous British Actors appear in it. The written language of the script is incredibly good. No point recounting the story since it is already published by Amazon. Without reservation I would recommend renting this film. It is based upon a true story and would be a great comparison to the greatly anticipated wedding of Prince Harry. Fortunately his wife will not have to suffer as Belle did, but she will receive some discrimination and has to remember how much we all respect and admire her.
Watching this film I could not help feel shame as a White person for what our ancestors did and for what so many Whites still do to people of color/
12 people found this helpful

Barbara AmellReviewed in the United States on September 23, 2020
5.0 out of 5 stars
The Reid Revelation
Verified purchase
Belle is a uniformly well-done drama, with a moral purpose at its heart. Gugu Mbatha-Raw has a lovely screen presence as Dido Elizabeth Belle Lindsay, the illegitimate daughter of an English naval officer and an African servant. As a child, Dido had become the ward of her great-uncle Lord Mansfield (Tom Wilkinson, in one of his finest screen performances). Mansfield was the Lord Chief Justice of England, and master of Kenton House, where much of the film was set. The screenplay by Misan Sagay implies that the Mansfield family’s love for Dido would eventually inspire Lord Mansfield to render a verdict in a landmark legal case that would mark the beginning of the end of legalized slavery in England. Dido’s idyllic upbringing is shattered, as all involved knew it would be, when she finds as a young woman that, despite an inherited fortune from her father, she is disdained by upper-class English society. Various characters express revulsion for her mulatto race and her illegitimacy. What goes unsaid in this film is that Dido’s appearance was also an unwanted reminder of a discomforting reality for the era: she probably did not owe her existence to consensual relations.
The supporting cast reads like a Who’s Who of deservedly renowned actors: Matthew Goode, Emily Watson, Penelope Wilton, James Norton, Tom Felton, Miranda Richardson, Alex Jennings, etc., all decked out in exquisite period costumes, with their scenes enhanced by a luscious score from composer Rachel Portman.
Best for last: Sam Reid as John Davinier, a vicar’s son, and an aspiring lawyer. Davinier is devoted to the anti-slavery movement, a subject upon which he bonds with Dido, to her family’s disapproval. Reid appears to have used a first-rate actor’s education to ascend to a performing technique that is all his own. Davinier is not afraid of the aristocrats who look down upon him, nor of the lifetime’s tribulations that an inter-racial marriage would bring into his life, nor of exposing the ruthless men who run a slave trade, because he is not afraid of his God. To render such a man believable, Reid gave Davinier’s face a most peculiar stillness, almost as if the muscles were made of stone. This was a risky trick, which could easily have implied a character’s dullness or an actor’s incompetence, but which Reid transformed into a startling revelation of this man’s spiritual depth and moral strength. Playing the pious common man in period dramas can be a daunting task for any actor; but Reid’s portrayal here offers one of life’s most important lessons, that genuinely virtuous people are the most fascinating, compelling and valuable creatures in the world. The irony in this stellar display of goodness is that the vicar’s son graciously yet relentlessly steals nearly every scene he is in. The highlight of this film for me was Davinier’s confrontation with Lord Mansfield over Dido, which director Amma Asante staged inside the Mansfield family carriage. This scenario is reminiscent in its nature and intent of the celebrated taxicab scene between Marlon Brando and Rod Steiger in On the Waterfront; but the acting here is superior, the pace quicker, and the surroundings more claustrophobic and unnerving. When Reid verbally explodes his declaration of love for the heroine into Wilkinson’s contemptuous countenance, their collaborative brilliance creates a friction that feels strong enough to peel paint. I defy anyone who views this scene to say they think they will ever forget it. Coincidently, both Wilkinson and Reid have played Jane Tennison’s lovers in differing seasons of the Prime Suspect series. Compare Reid’s Davinier with his DI Bradfield in the Prime Suspect prequel: both men are the romantic heroes, yet these two characters have been rendered so differently, that their sole connecting thread is originality. A Sam Reid performance will not remind you of any other actor’s work—not even his own.

Linda DansbergerReviewed in the United States on January 15, 2021
1.0 out of 5 stars
No Bells Ringing For This Movie!
Verified purchase
I saw “Belle” in the movie theatre in 2014! I love those period movies from eighteen century! To my disappointment when movie was released to public it was only available in Blu-ray not DVD. Because it was filmed in England the Producer/Director or whoever had the rights to only make it Blu-ray. I saw in Dec, 2020 that it was now on DVD. So I purchased two copies. One for my granddaughter and one for myself. I mailed hers to Kentucky and tried to watch mine. Neither of us were able to see it on our DVD players. I would prefer getting copies that work or a refund for the 2 movies. What a major disappointment for both of us!!
One person found this helpful

S.E.Reviewed in the United States on February 8, 2015
5.0 out of 5 stars
Remarkable movie. I highly recommend it to anyone with even a passing interest in history.
Verified purchase
This was a beautifully done film about my favorite period of history. I'll admit, before I had seen this film, I knew nothing of Dido Elizabeth Belle.

As a lover of history, I'm grateful to filmmaker Amma Asante for creating this fantastic work.

It's based on the true story of Dido Elizabeth Belle, who was the illegitimate daughter of Sir John Lindsay (an English Admiral) and an African slave woman named Maria Belle. Dido was brought at a very young age to be raised by her great uncle William Murray, 1st Earl of Mansfield, and his wife. She enjoyed all of the benefits of an aristocratic upbringing — except an equal status in society because of the color of her skin. Dido's life and her position in the eyes of her great uncle and guardian, Mansfield, who was Lord Chief Justice of England and Wales at the time, does impact, even if only to a small degree, the then-future of the slave trade in England.

Remarkable movie. I highly recommend it to anyone with even a passing interest in history.

Amazon CustomerReviewed in the United States on November 22, 2020
4.0 out of 5 stars
Perfect condition, beautifully wrapped
Verified purchase
Arrived way before I was told it would in perfect condition, and it was beautifully packaged. The only reason I don't give five stars is because since it came from the United kingdom, I have to switch the region on my computer DVD every time I watch it, because I live in the United States. I don't have a TV right now, so I'm sure that will change in future and be easier. 🤗

As for the film, it has always been one of my favorite period films. Emily Watson and Tom Wilkinson are two of my favorite actors, and it is such a pleasure to watch them. The rest of the cast deliver, as well.
See all reviews
Back to top
Get to Know Us
Make Money with Us
Amazon Payment Products
Let Us Help You
EnglishChoose a language for shopping. United StatesChoose a country/region for shopping.
© 1996-2021, Amazon.com, Inc. or its affiliates