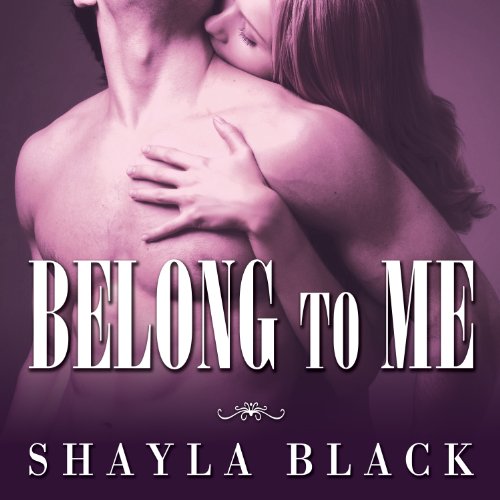 Belong to Me: Wicked Lovers, Book 5

Navy SEAL Logan Edgington once left the woman he loved to save her life. He knows Tara will never forgive him, but he has no doubt that he possesses the knowledge to master her fears and the strength to guide her through an unfamiliar world of pleasure and pain. He alone can protect her on a dangerous mission that reveals both wicked depravities and terrible secrets. Logan relishes the exquisite torture of holding her again, feeling her uninhibited response. No matter how much Tara insists their fling will end after this mission, he's determined that she will be his again - and this time, he'll never let her go.

Special invitation from Audible!
Learn more about Membership
List Price: $31.49
You Save: $4.54 (14%)
By completing your purchase, you agree to Audible’s Conditions Of Use
Sold and delivered by Audible, an Amazon company

Logan Edgington was a Navy Seal, an uber alpha and totally damaged. His mother was brutally murdered; he had discovered the body and now several years later, it was still a cold case. Logan was a popular Dom at the club Dominion and we assumed early on that he had a lost love, but the details were unraveled as the story progressed.

Tara Jacobs was an FBI agent. She was training as a submissive at Dominion to go undercover to help stop a sex slave trade ring. She was paired with Logan for her training. They had a past and Tara still hadn’t forgiven Logan for his callous way of ending things.

I disliked Tara from the beginning. She was undercover trying to train as a submissive but was the worst candidate for a submissive and it was annoying. I didn’t buy into her being able to successfully pull off the role undercover and I hated her topping from the bottom.

welshgirl
4.0 out of 5 stars Second time's the charm
Reviewed in the United States on June 27, 2016
Verified Purchase
It took me two tries to get through this book. At first I was immediately turned off by the descriptions of Dominion, and Fantasy Key disturbed me greatly. Then I took some time off and when I came back to it, I looked at it with a different view. Fantasy Key is supposed to be disturbing, the main characters are disgusted by it, that is part of the reason they are there, to stop it. Some of the coincidences are a little too convenient. "Xander used to work there? No way!" but it helped tie the story together, especially since Xander is a recurring character in the Wicked Lovers series. Getting through the book allowed me to understand Logan a lot more than what he seems on the surface, and now I think I could actually like him if he were a real person, and I understand Tara's feelings for him. I was very glad to see how much Logan respected Tara deep down and was willing to change himself for her (pipe dream? maybe...) instead of coercing her into becoming someone he wanted her to be, especially that whole "you say you don't want xyz, but i know that you really do deep down" bologna. Tara remained a strong woman, able to handle herself and didn't fall into the 'take care of me i'm helpless' category. Make sure to give this book the chance it deserves, and you'll be glad you did.
Read more
One person found this helpful
Helpful
Report abuse

Sinfunni
VINE VOICE
3.0 out of 5 stars B/s with Dm:
Reviewed in the United States on September 16, 2012
Verified Purchase
First let me acknowledge that I have read all of the books of the Wicked Lovers series as well as other stories told by Ms. Black. I consider her to be an automatic purchase whenever I see her work. I have read many books in the genre. However, this is definitely not my favorite book in the Wicked Lovers series. The book has far too many pages that draw out Tara's struggle to trust her first love, Logan. Their story would have been much more rewarding if their conflict had a more believable focus. Oops, I'm going ahead of myself. Logan a Navy Seal on leave is a Dom at a club that has agreed train FBI agent, Tara, as a submissive so she can be believable when she goes undercover to rescue her bestie and fellow agent who is being held captive by a sex slave ring. Logan was Tara's first love and she gave him her virginity. However, the very next day he breaks up with her without sharing that he received a letter threatening her safety if they continue their relationship. So twelve years later, she's engaged and still trying to go on with her life though Logan remained in her heart in spite of efforts to hate him. Logan has not been able to have a relationship or meaningful sex with another woman so he's been celibate for the past 5 years. Logan has never stopped loving Tara. For him no woman can compare to Tara though many women would have loved the opportunity to show him otherwise.

Anywho, this story was built on a juvenile foundation that was underneath the characters. Tara just comes off as whiny and hypocritical. I can't trust you because you broke my heart as a 16 years old male who was warned to stay away from me or I would die. Even after she learns why he broke with her 12 years ago, she still tries to punish him for it. What was the point of growing up? You didn't tell me that you if didn't collar and / or marry me, you would lose your membership at the club; even though, I put you in the position of having to risk your membership (conspiring to have you removed as my trainer / Dom), I was pushing you away, I was engaged to another man, and I refused to acknowledge that I never stopped loving you, we could have worked something out instead. REALLY? Logan I can't trust you yet I have sex with my ex while engaged under the guise of training for a mission. I can't trust you yet I won't tell my fiancé that you are my trainer because I don't want him to overreact.

Logan's celibacy was believable and endearing. It showed that he understood himself and sex. He demonstrated his masterful skills repeatedly throughout this tale.

Xander needs a transplant before he gets his own novel. He comes off as a bratty sister rather than a Dom or a grow man's best friend. Really he did not know that it wasn't his place to tell Tara about celibacy, and undying love, tattoos, the collar and /or marry or you lose your membership agreement.

The identity of Sire was obvious from the very beginning. Shame too because a better subplot could have saved this book.

The endings were rushed. Ms. Black should have spent more time on the island; it would have made for a much better read. Tara and Logan could have tested their trust issues on the island since Ms. Black insisted that that be the theme for this tale. Okay, ENOUGH of my rants. I was disappointed with Logan's story but I will continue to read all the books in the series because in general the series has been filled with sizzle. Do I recommend this book? It depends if you intend to read the series. If you are looking for a stand alone read, I say skip this one. If not, it's not the worst just not the best. You will get through it, I did.
Read more
One person found this helpful
Helpful
Report abuse

Patti B.
4.0 out of 5 stars Love Logan and Tara's story!
Reviewed in the United States on April 28, 2020
Verified Purchase
Logan and Tara were high school sweethearts that split up after a tragic event. When they meet again as adults, Tara is a FBI agent training to go undercover as a submissive to infiltrate a sex ring. Logan, a decorated SEAL, is an experienced Dom at Club Dominion. As their feelings rise to the surface, they learn to trust again. When Tara's partner isn't able to perform as a realistic Dom, Logan accompanies Tara to Fantasy Key. Old mysteries are solved as they, along with Xander, follow some surprising twists to break the ring.

I really enjoyed their story as they find each other for their happy ever after. Xander is an interesting character and I am looking forward to his story too!
Read more
Helpful
Report abuse
See all reviews

Sherry Walker
5.0 out of 5 stars 5 stars
Reviewed in the United Kingdom on March 27, 2015
Verified Purchase
"She'd never required someone for her next breathe the way she did Logan in that moment. God, she'd been hoping to bring them both closure, but now he felt like a part of her...so necessary to her existence"

Anna1212
4.0 out of 5 stars Romeo and Tara
Reviewed in the United Kingdom on March 16, 2013
Verified Purchase
One of my all time fab books is Wicked Lies (I have read it twice), so I knew I would enjoy this book. Logan is super sexy and Tara feisty, strong but also a fragile heart. The back story unbelievable at times but the D/s relationship makes up for it.
Read more
Report abuse

maple144
5.0 out of 5 stars what a read
Reviewed in the United Kingdom on September 13, 2012
Verified Purchase
these books come in a set of the best reads that you will have
i have just completed the last one and i am soooooooo sad
please if you want a good set of gritty books with a storyline then these are for you
scene these books really are hot hot hot wow wow wow
read them i dare you not to love them
Read more
Report abuse

Joolie
5.0 out of 5 stars Shayla Black
Reviewed in the United Kingdom on December 19, 2012
Verified Purchase
Why did i not find you before Fifty Shades? These set of books by Shayla Black are truly incredible reads. Could not put them down. Can't wait for more!!
Read more
Report abuse

LeeB21
5.0 out of 5 stars I love these series of books!
Reviewed in the United Kingdom on January 17, 2013
Verified Purchase
it got me addicted after the first chapter, I love the end after what was revealed he finally got his girl!
Read more
Report abuse
See all reviews