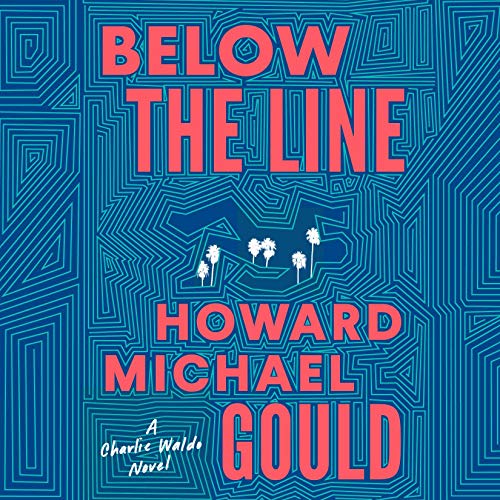 Below the Line: A Charlie Waldo Novel

Former LAPD detective Charlie Waldo was living in solitude deep in the woods, pathologically committed to owning no more than one hundred possessions, until his PI ex-girlfriend Lorena dragged him back to civilization to solve a high-profile Hollywood murder. Now Waldo and Lorena have their hands full with a new client, a wild and privileged L.A. teenager named Stevie Rose who tells lies as easily as she breathes.

When the teacher Stevie claims seduced her turns up dead, the LAPD pegs her as the prime suspect. Then Stevie disappears, and her self-involved Hollywood parents turn to Waldo to find her - a task that draws him down into Orange County’s dangerous and complex worlds, both opulent and seedy, where nothing is as it seems.

With treachery and deception at every turn, and with Waldo’s eco-obsessed rules for living complicating his already complicated relationship with Lorena, Waldo fends off enemies old and new as he races to find Stevie and solve the murder.

Special invitation from Audible!
Learn more about Membership
List Price: $24.50
You Save: $3.06 (12%)
By completing your purchase, you agree to Audible’s Conditions Of Use
Sold and delivered by Audible, an Amazon company
Share

4.2 out of 5 stars
4.2 out of 5
75 global ratings
How are ratings calculated?
To calculate the overall star rating and percentage breakdown by star, we don’t use a simple average. Instead, our system considers things like how recent a review is and if the reviewer bought the item on Amazon. It also analyzes reviews to verify trustworthiness.
Top reviews

Walter P. Roura
1.0 out of 5 stars Where's Waldo? Nevermind
Reviewed in the United States on December 8, 2021
Verified Purchase
I really wanted to like this book - but in the end....nevermind.

I found that the twin characters, Waldo and Lorena, started out as an interesting pairing, but quickly got on my nerves. There was not much to like about them. It seems that Waldo was/is defined by his desire to get his carbon footprint to absolute zero (he can possess only 100 things and must give one thing up if her purchases or is given a new one). But being so defined got tiring as did his need to walk or bike everywhere for miles at a time rather than take a polluting taxi.

Lorena was presented as a sex-starved individual who runs hot or cold by each passing minute. She had no depth other than her complaining of one thing or another and jumping into and out of bed. My final impression of her was: to be avoided at all costs. As for the teenage femme fatale and her parents and extended family, I could stomach them only if I had a two-by-four within handy reach. The side characters were somewhat colorful and helped to add to the length of the tale.

Not appreciated was the author's insistence of referring (obliquly) back to previous Waldo encounters as often as he could. It seemed the author could not get away from plugging his previous works involving this character and hoped that the reader would reverse gears and read the precious tales to get a better felling for Waldo. As for the Waldo character, his detecting was ordinary. Of course, this must be viewed in light of the "plot" which was weak and barely extant. This reviewer won't be searching for Waldo next time.
Read more
Helpful
Report abuse

Kindle Customer
5.0 out of 5 stars More, pkease.
Reviewed in the United States on October 20, 2021
Verified Purchase
I continue to be fascinated by Waldo's commitment to his 100 things, even during very stressful moments. I really enjoy the characters in these books and hope this will be a long series.
Read more
One person found this helpful
Helpful
Report abuse

John Vanderhoof
5.0 out of 5 stars I give it a 5 cos---it is different, sort of funny, and has weird characters--at least the 2 stars
Reviewed in the United States on January 13, 2020
Verified Purchase
this is the second in the series---hope there is more

not heavy duty, good for the airport--but fun

Cstrawser
5.0 out of 5 stars More Charlie Waldo!
Reviewed in the United States on August 26, 2021
Verified Purchase
Charlie Waldo is such a complex, exasperating, hilarious, upright character that my only criticism is that I'm afraid I'm about to run out of stories featuring him.
Read more
One person found this helpful
Helpful
Report abuse

Gil Haught
5.0 out of 5 stars Charlie Waldo I am sure he is related to Monk
Reviewed in the United States on August 21, 2019
Verified Purchase
I love detective novels but I usually have a pretty good idea of who the doer of the deed is long before the end of the book. Howard has kept me guessing right up till the final reveal both books the killers were not ever on my radar . Glad my sister Sharon recommended them.
Read more
5 people found this helpful
Helpful
Report abuse

Amazon Customer
5.0 out of 5 stars Another enjoyable Charlie Waldo story.
Reviewed in the United States on August 26, 2021
Verified Purchase
Liked the easiness of the story. Not complicated. Didn’t want to put it down. Wasn’t expecting the culprit in the end.
Read more
One person found this helpful
Helpful
Report abuse

Howard Michael Gould, the author of Last Looks and Below the Line, matches Goldberg and Crais puzzle for puzzle and laugh for laugh, and he throws in the eco-conscious sensibility of an ex-cop who wants to keep his carbon footprint so small that he purges himself of all but 100 possessions.

There are also a lot of boy-girl questions in this story (not all of them resolved by book's end) and an abundance of potshots at the shallow So-Cal lifestyle.

Charlie Waldo, the main character, seems to have history with most of the book's other characters, especially Lorena, a private eye who seeks his assistance on a case and invites him back into her bed (past breakups notwithstanding).

There are characters from the movie business and bad guys who indulge in a little human trafficking on the side, and most notably a very messed-up teenage girl who seems to have toyed with most of the depravities available to prosperous Angelenos.

I liked Charlie Waldo a lot. My inner jury is still deliberating on Lorena (maybe a little too volatile and capricious to be believable??)

Thanks to NetGalley for an advance readers copy.
Read more
4 people found this helpful
Helpful
Report abuse
See all reviews

sandra k chung
5.0 out of 5 stars Book
Reviewed in the United Kingdom on August 20, 2019
Verified Purchase
Arrived in good condition. thank you
Read more
Report abuse
See all reviews
Back to top
Get to Know Us
Make Money with Us
Amazon Payment Products
Let Us Help You
EnglishChoose a language for shopping. United StatesChoose a country/region for shopping.
© 1996-2022, Amazon.com, Inc. or its affiliates