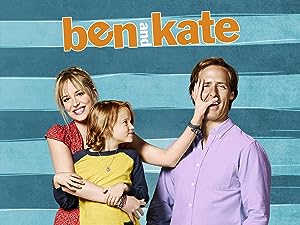 Season 1
(77)6.62012TV-14
When Ben comes to crash on Kate's couch for a few days, he finds a sad state of affairs. For the first time in their lives, Kate needs Ben's help, and he's determined to bring some much-needed chaos into her overly stable world. He starts by looking after Maddie so Kate can get back to making mistakes, since the one real "mistake" she made turned out to be the best thing that ever happened.

JCReviewed in the United States on July 28, 2016
5.0 out of 5 stars
Don't miss the chance to see Ben and Kate!
Verified purchase
This little sitcom is a lost gem. There's wonderful chemistry among the cast members, along with great comic timing. I was sad to hear it was cancelled after only 13 episodes, and read that there were three additional shows filmed but left unaired. This Amazon series includes all 16, and I look forward to seeing the complete set.

Much of the comedy is in quiet one-liners and afterthoughts, not to mention the hilarious doubletakes. I'm baffled that more people didn't get into this show. I would have bought a Blu-ray set in a heartbeat, but I'm grateful simply to have discovered that Amazon is streaming the one and only, and complete, season of this greatly underappreciated show.

Did I mention how terrific the cast and writing are? Well, not enough!! I laughed my posterior off.

CazbazReviewed in the United States on January 2, 2019
5.0 out of 5 stars
Such an ADORABLE and FUNNY show
Verified purchase
I am a huge Dakota Johnson fan. I want to see anything she has been in so this was of course way up on the list. At this moment in time you can not buy them on DVD so I got the digital version and I am so glad I did. I will never understand how this show got canceled. It is delightful. Very light hearted with a great message about family. It shows you that family is not necessarily your mom and dad. Sometimes your family is a little different and the friends you make on the way can be just as important as your own blood. Everyone in the show did a great job with their acting.
One person found this helpful
Report abuse

ShazbotReviewed in the United States on April 22, 2017
5.0 out of 5 stars
Goofy siblings at their goofiest
Verified purchase
I absolutely loved this when it was on. Every single character is a unique head-case except Maddy, Kate's little girl. Nat Faxon is wonderful, crooked smile and all. Dakota Johnson's character is just a little to weird for me, but in her less weird moments, she is brilliant. Her reaction to her brother Ben is always enjoyable, and friends Tommy and B.J. could have a show on their own. Love it all! So they cancelled it after one precious season. Delightfully goofy. Check it out and see.
One person found this helpful
Report abuse

baileyReviewed in the United States on June 14, 2018
5.0 out of 5 stars
an incredibly sweet and well done show
Verified purchase
I loved the show when it originally aired and love it still. I return to it when I want a nice sweet fun funny well written and performed show with a wonderful cast. I wish it had more than one season. I'm glad I bought it.
One person found this helpful
Report abuse

K, WisconsinReviewed in the United States on January 25, 2019
5.0 out of 5 stars
Why didn't this series find an audience?
Verified purchase
Clever story with interesting characters. One refreshing difference is the little daughter is NOT a smart-mouthed, know it all like so many children populating television these days. She's a real kid.
Too bad there was only one season. It would have been fun to see where the characters went in season 2 or even 3.
Report abuse

gmt7kReviewed in the United States on November 18, 2013
5.0 out of 5 stars
Funny Stuff!
Verified purchase
Very funny show and I'm so sorry it was cancelled prematurely before people really got acquainted with it! The show only got better and funnier as it went along. Nat Faxon is one of the most hilarious actors around, and totally underrated. His timing is impeccable and the way he interacts with children on the show is one of the funniest things you'll ever see. BRING IT BACK!!
4 people found this helpful
Report abuse

Michael J JanavelReviewed in the United States on June 29, 2019
1.0 out of 5 stars
50 Shades of Dumb
Verified purchase
It’s astounding that someone gave this a green light. One dimensional characters who never grew up and enable each other. Maddie, the actual child, is more grown up.

JGleemReviewed in the United States on June 3, 2017
4.0 out of 5 stars
You really enjoy spending time with these characters
Verified purchase
The outstanding chemistry between the cast really elevates the material, which is not otherwise far from standard sitcom plots. You really enjoy spending time with these characters, and their relationships feel very real without requiring too much exposition. All signs pointed to an even better second season. Unfortunately, it wasn't meant to be.
Report abuse
See all reviews
Back to top
Get to Know Us
Make Money with Us
Amazon Payment Products
Let Us Help You
EnglishChoose a language for shopping. United StatesChoose a country/region for shopping.
© 1996-2021, Amazon.com, Inc. or its affiliates