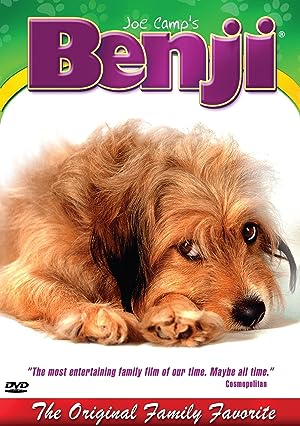 (388)
6.11 h 25 min1974X-RayALL
This tail-wagging tale begins as Benji visits his pals Cindy and Paul, whose fater Paul Chapman, won't let them give the mutt a home. But the shaggystray changes his mind by saving the day when Mitch and his reluctant partners kidnap the kids.

MichaelReviewed in the United States on February 18, 2018
5.0 out of 5 stars
The 2018 restored version looks great in widescreen! Don't get the wrong Blu-ray!
Verified purchase
I sometimes hate how they mix reviews since this new remastered version is so much better that the previous bluray! I got the remastered Benji a few days ago and I've watched it once myself and once with my kids. It's a great restoration! In fact, it's the first them I've seen the movie widescreen! It looks wonderful for it's age, and it sounds very good. It's tons better than the previous bluray release! If you want Benji, get the orange cover with the circle that says it is widescreen!

I want to spend most of my time reviewing this new restored release, but the movie itself is very good for family entertainment. It's a fun, classic movie following a dog's life. A large part of it just follows the dog as he does his daily rounds and how he finds a lady friend and then it leads to him eventually saving the day! It's pretty slow by today's standards and younger kids will probably enjoy it more. It's pretty clean with no bad language and light violence. There is one point where a dog is kicked, but it cuts away right before the actual kick and the dog is ok later. Two kids are kidnapped and yelled at some, but they aren't hurt. The bad guys use guns to threaten and the cops use guns to arrest the bad guys. A gun being shot is show in a flashback, but nobody is shown shot. It's a very clean movie that's great for family entertainment.

It's obvious this is a movie from the 70's, but it's the best I've ever seen it. There is some grain throughout. I wouldn't call it light grain and I wouldn't call it medium grain--somewhere between the two. There's a speck of film damage here and there but you really have to be watching for it to notice. It looks really great. It was a budget release at the time and you can tell the cameras/camera work are less than amazing, but for what it is it looks great.

The sound is nothing amazing, but it lets you hear what people are saying and the music sounds pretty good. All the music is 100% 70's so if you like that style, you'll like the soundtrack.

But overall, it kept the interest of my 3 girls (ages 3-8). Some of it was a little drawn out and repetitive, but the story changes a little each repetition. I think it has a very good lesson about not giving up when you're doing the right thing. It's cute, it's simple, it's good for all ages. We're not going to watch it every week, but I'm glad we've got it and I'll pull it out again on a rainy day this summer! :) I do suggest it. I see that the "For the Love of Benji" restoration is coming out in April 2018, so I'll be picking that one up next.

Lisa LyonsReviewed in the United States on April 9, 2020
5.0 out of 5 stars
A just-because gift for a friend at work...
Verified purchase
The friend I bought this for is in her early 30's...she and I happened to be talking about movies from our childhood (now, she's like 20 years younger than me...lol) and she mentioned that one of her most beloved memories was watching the original Benji movie when she was a kid. I'm thinking, wow! She sure does love the "classics"! When she mentioned it was from the 1970s, I was shocked that Benji was that "old"! She also said she couldn't find it anywhere so, I went looking, knowing that I could find it here, on Amazon, or that one of the 3rd party sellers could hook me up...and it happened exactly that way!! I bought it for her and when I gave it to her as an "early" birthday gift (her birthday is in August! Lol), you would have thought I was presenting her with a gold platter!! I love giving to others but just seeing how much she appreciated it was a gift to ME...
2 people found this helpful

Alex HReviewed in the United States on May 12, 2022
2.0 out of 5 stars
If you love mutts and the 70s, this is your film - however...
Verified purchase
I mistook this movie for the 2018 movie by the same name. Big mistake! Still, when I got it, I figured that any movie that started a series had to be pretty good - wrong again. In this movie, the dog is the main character. The movie follows the dog who lives in an abandoned house as it hits up various people for treats and meets a girl dog. That's really the entire movie.

Oh, by the way, the dog rescues two kids from kidnappers, but the humans in this movie are just window dressing. The kids are just there to be kidnapped, so their lives and the lives of all the humans in this movie are one-dimensional and unimportant next to the dog. As a result, the dialog is puerile, and the entire movie is bland and poorly written. How this ever sparked a series of movies, I'm not sure.

Khristine JacksonReviewed in the United States on October 21, 2020
4.0 out of 5 stars
It's a Dog ... W.O.R.L.D .... & we're just livin ..in it !
Verified purchase
Growing up what else could I say about our furry friends ..was that they rule. There is a connection that a dog and his/her pet parent has that is undeniable .... solid ! Benji and the franchises were legendary for my generation.. We love the dog ...and the story behind his appeal. Benji just ins't for kiddies ...he (Higgins) touches all of us who adore our 4-legged friends. The director (Joe Camp) did a great job piecing the story-line, blending dream sequences and the co-stars such as " Edgar Buchanan(Petticoat Junction), Frances Bavier, (The Andy Griffith Show)Terry Carter and Peter Brent ( kids dad) we recall from The Big Valley. The town of Denton,Texas was the location in 1974.. The fella who played Benji was named "Higgins"... his career was from 1960's-1974. Higgin's had a daughter named "Benjean" and she followed in her papa's shoes ...in the sequel's.. This movie is perfect for little children as well as the entire family.... As benji would say..... Woof ".. !

BeeReviewed in the United States on March 19, 2020
5.0 out of 5 stars
Nice and Enjoyable Movie
Verified purchase
The dog (Benji) is so adorable! Benji was a nice and enjoyable movie. It was a happy surprise to see Peter Breck (Nick Barkley on The Big Valley), Frances Bavier (Aunt Bee on The Andy Griffith Show), and Edgar Buchanan (Uncle Joe on Petticoat Junction) in the movie. I always thought that Peter Breck was a good looking man. The movie's ending was a happy one.
One person found this helpful

Francis MedinaReviewed in the United States on December 8, 2018
5.0 out of 5 stars
Much better picture & sound quality! The version to get!
Verified purchase
I already own the previously released bluray version (2004) of this film and both the picture and sound wasn’t great. I was impressed with the recently released For The Love of Benji and I decided to buy again the first film Benji out of curiosity to see if this 2018 version is better than the first release and I’m glad that I did. The picture and sound quality is much better. Thanks Mill Creek for the excellent job! Benji, For The Love Of Benji, Off The Leash and Very Own Christmas Story are now out. I wish Mill Creek will release Benji The Hunted and Oh! Heavenly Dog.
3 people found this helpful

BlinkReviewed in the United States on March 5, 2019
3.0 out of 5 stars
Good movie but redeeming digital copy is annoying.
Verified purchase
This review is on the fact that the digital copy of this movie is only usable on mill Creek website. Normally when you redeem the digital copy of a movie you can use it with Vudu or similar apps and this one isn't. With everything changing and digital sites closing their websites like ultraviolet etc. This doesn't make me feel very confident in wasting money on a combo disc with digital copy.

V KocianReviewed in the United States on August 11, 2020
4.0 out of 5 stars
I love Benji
Verified purchase
I love Benji - bought this for my grandkids because their Benji movie got scratched. The oldest said she did not like the Christmas movie, but the others were good. I didn't watch with them.
See all reviews
Back to top
Get to Know Us
Make Money with Us
Amazon Payment Products
Let Us Help You
EnglishChoose a language for shopping. United StatesChoose a country/region for shopping.
© 1996-2022, Amazon.com, Inc. or its affiliates