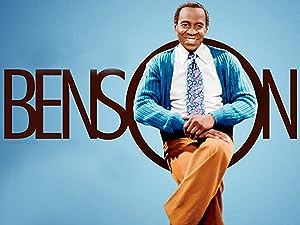 Season 1
(338)7.11980ALL
Following his breakout success on the legendary sitcom Soap, star Robert Guillaume reprises his popular role as beloved butler Benson DuBois in the fabulous first season of this hit spin-off. Though a longtime fixture of Soap's crazy Tate family, Benson is sent by his employer, Jessica, to help run the disorganized household of her widowed cousin, Governor Eugene Gatling (James Noble). Once th...

FireReviewed in the United States on November 8, 2020
5.0 out of 5 stars
Better than the first time around!
Verified purchase
It'd been years since I first saw Benson and I'd forgotten how funny the show was. I have SOAP, watched it, starting wondering about the show and had to order it. If you got one, you really need the other, and if you get season 1, you really do need season 2, they all go together in a way-crazy, zany fun. How could you not like that? Just forget about the world and what's going on and relax with a truly funny show. Some things seem right out of todays headlines even, and Benson was always a one of a kind. I suggest you give it a try-it'll surprise you how good television can be and was. Fire
3 people found this helpful

JulieReviewed in the United States on August 11, 2019
5.0 out of 5 stars
Do Not Trust Episode Descriptions
Verified purchase
I give 5 stars for the series. I am so glad this series has come available to watch! This series is one of my favorites.

The pilot is the only episode so far that I have found to be correct. I do plan to buy the entire series eventually but right now I wanted to buy favorite episodes.

The show is good through and through but be warned if you are going to attempt to pick episodes.

ServoReviewed in the United States on February 16, 2011
5.0 out of 5 stars
ABC's Benson: Season One!
Verified purchase
After two seasons (and a Best Supporting Actor Emmy win) for his work as wisecracking butler Benson Dubois on the ABC comedy [[ASIN:B00008EY5S Soap]], actor Robert Guillaume was promptly spun-off into this brilliantly funny series during the 1979-1980 season. Long-running (7 seasons), Benson's producers (who would follow up with future hits [[ASIN:B0002W4SX6 The Golden Girls]] and [[ASIN:B00005JNMI Empty Nest]]) took what made Soap such an endearing watch and deftly adapted it to Benson. Sporting a great cast, sharp writing, laugh-out-loud humor, and remarkable heart, Benson - The Complete First Season is a 3-disc (single-sided) set featuring all 24 episodes mastered in high definition Full-Frame (1.33:1) video; Dolby Digital audio; Closed Captioning; plus the following Special Features: "Video Introduction by Robert Guillaume" welcoming viewers to the First Season (1:04); "Inside The Governor's Mansion" featurette with actors Robert Guillaume and James Noble, and producer Tony Thomas (looking every bit like his late great legendary dad, Danny Thomas) sharing their thoughts and behind-the-scenes info (29:26); "Favorites From The First Season" featurette which reveals their favorite episodes from the season (6:00); plus a Photo Gallery featuring a nice video montage of still photos from the show (1:30). The discs (each of which feature images of the cast and play flawlessly) are housed in slimcases (with episodes and plot descriptions listed on the back) inside a slim outer box.

Props to Sony for packaging the show in a first-rate DVD season set which features decent picture and sound and cool extras. It's good to have a complete season of this classic show nicely preserved on DVD. Hopefully, the first of many to come.
6 people found this helpful

Rena R TrentReviewed in the United States on May 23, 2019
5.0 out of 5 stars
Good show
Verified purchase
Show was funny back when it first came on TV. It is as funny still. Love the characters.
4 people found this helpful

ISReviewed in the United States on March 17, 2020
5.0 out of 5 stars
Top show
Verified purchase
Very happy to be able to watch one of my favourite TV shows.
2 people found this helpful

CoopReviewed in the United States on April 5, 2018
4.0 out of 5 stars
Good show
Verified purchase
I bought this for someone who likes the show, and is hoping ther put out more than just the first two seasons on DVD.
2 people found this helpful

Krystal RoutReviewed in the United States on September 2, 2018
5.0 out of 5 stars
Entertaining!!
Verified purchase
My son was very excited to receive this, hopefully the rest of the seasons will become available.
2 people found this helpful

Buyer of products that do the job Reviewed in the United States on September 9, 2021
5.0 out of 5 stars
Excellent TV show
Verified purchase
Excellent TV show.
Would like all the years on DVD
But only 2 years are available.
Would like Amen TV show on DVD also.
Delivery was speedy, and in good condition.
See all reviews
Back to top
Get to Know Us
Make Money with Us
Amazon Payment Products
Let Us Help You
EnglishChoose a language for shopping. United StatesChoose a country/region for shopping.
© 1996-2021, Amazon.com, Inc. or its affiliates