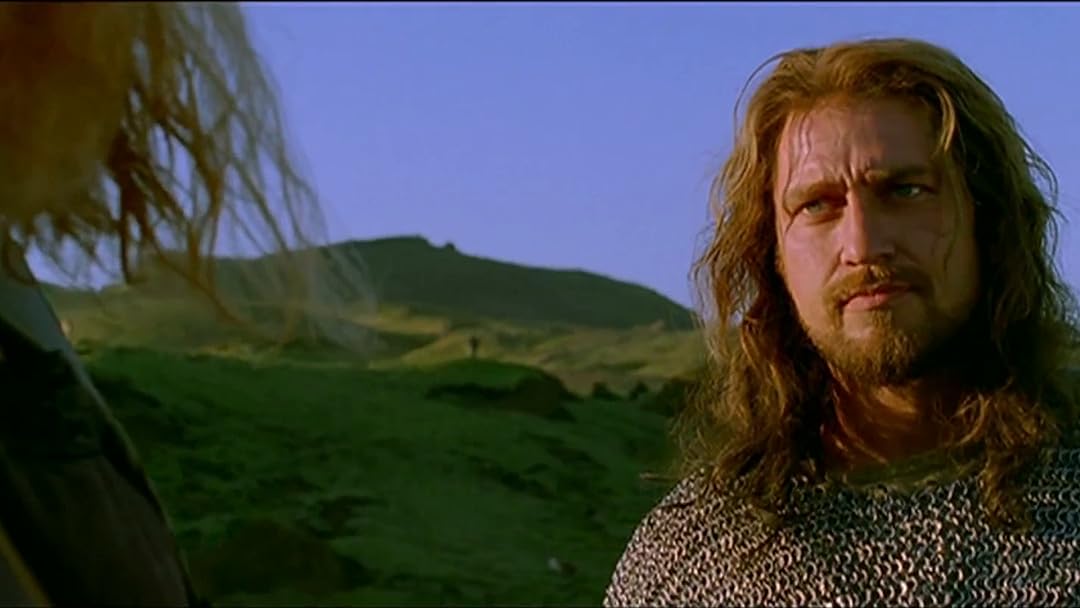 Jack RyanReviewed in the United States on March 13, 2019
2.0 out of 5 stars
Watch 13th Warrior Instead
Verified purchase
The 13th Warrior, which this occasionally imitates, is a much better recasting of the Beowulf story. This one goes too PC and, I dunno, Canadian in pitching Grendel as a poor misunderstood outsider wronged by the smug, kinda racist Hrothgar. And for a blood-and-iron epic tale it drags a lot, which the original poem never does. Also, they must not have consulted with any Beowulf scholars, or they'd have known that Beowulf's tribe, the Geats, is pronounced Gay-ats, not Geets. It's a nitpicky point, but still irked me. It has a few good points. The Icelandic scenery is suitably heroic, and it's generally a strong cast, except for Sarah Polley, looking prettier than ever but terribly miscast, and Stellan Skarsgard, sleepwalking through a role he's played too often. Then again, the big Scandinavian dude they got to play Grendel is quite good and convincing.
41 people found this helpful

Jonine BlackshearReviewed in the United States on May 18, 2019
1.0 out of 5 stars
A complete, utter, and vulgar disappointment
Verified purchase
Always the twist of making the heroes the villain and the villain the martyr. Tons of crass and vulgar conversations covering bestiality and sexual predation. Soft porn sex scenes included. After a while I finally decided the plot was about sweaty and nasty men thinking from the waist area and not really classic literature. If there are worse scenes more than what I described it is because we turned it off (wishing we had done so sooner). This is definitely NOT one to show in the classroom for literature study.
32 people found this helpful

Ron BakerReviewed in the United States on March 23, 2019
4.0 out of 5 stars
Very entertaining mythology
Verified purchase
This is my second favorite film on the Beowulf tale, my favorite is the 2007 live action animated film with Ray Winstone, Anthony Hopkins and Angelina Jolie.

This film is very different than the 2007 film in the way it depicts the Beowulf and Grendal, but I liked it. This has a very Viking feel and is more mortal, more human. Grendal is portrayed as almost a cro-magnon man and his mother a witch crone. Beowulf is very much a mortal human and this rendition isn't supernatural. As such, it has a more authentic feel.

Andrew "Big Ugly' HaleReviewed in the United States on January 22, 2020
2.0 out of 5 stars
Contrasts the Source Material Negatively
Verified purchase
My main complaint is the lack of action and the uninteresting dialogue. Other cons are for "non-canon" Selma and her basically undertone of bewitching sexuality, for Grendel being made out to be a victim.

If we look to the source material, Grendel is a human-devouring monster who basically attacks the joy of Hrothgar's men, being a cursed descendant of Cain. Beowulf is a Godly man who uses his bare hands and brute strength to take on Grendel, ripping his arm from it's socket.

Of course, we don't always have to go by the source material fully, as the movie 13th Warrior did a good job of revisioning this story. But the 13th Warrior removed Beowulf and Grendel and replace each with multiple characters, where anyone unfamiliar with the original story would not know that this is a movie modeled after it.

Honestly, I think the inclusion of Selma and her two sex scenes and her aggressive practical language was done to spice up a boring story and to contrast the drunken emotional men. Bad characterizations all around.

Though Grendel was still barbaric and a rapist (which didn't seem to be shown as bad like it should have), the actor who portrayed him demanded your attention and was even funny on occasion.

grolarReviewed in the United States on April 19, 2019
1.0 out of 5 stars
Silly revisionist vanity project
Verified purchase
Take a masterpiece of heroic poetry acclaimed for its beauty and replace the story with modern day tropes such as "heroes are the real monsters" and you have this film.

The film is ahistorical in many details beginning with the fact that it took place in Denmark, not Iceland, where the geography looks markedly different ( no icebergs from Goetland to Jutland e.g.).

So why film in Iceland ? Turns out the filmmaker left Iceland as a child for Canada and wanted to make the movie in locations with the worst weather conditions in Europe as he thought it would add verisimilitude to the story.

The documentary about making this project, "Wrath of the Gods" is also available on Prime is a much better movie than this one.
12 people found this helpful

saberReviewed in the United States on March 11, 2019
5.0 out of 5 stars
Beowulf Lives!
Verified purchase
It was pretty shocking how a low budget movie with a great story and actors can work very well. It was one of the best Beowulf movies I had ever seen. The fights, blood & Gore, and scenic environment made the movie really authentic. It was refreshing to see a good movie without any CGI or fancy explosions or computer animations. Even the sex scenes weren't bad. I hope another movie comes out that depicts other mythical legends.
12 people found this helpful

M. McLeod ThorpReviewed in the United States on September 20, 2019
1.0 out of 5 stars
What. A. P. O. S.
Verified purchase
I was led to this movie by some killer vikingish bands using clips of it in their youtube videos to great effect. Oh, they made it look cool. And the hot red head.

I started it. Oh, Gerard Butler, this has to be decent. Have you ever heard of the sunk cost fallacy? I should have known 1 minute in to stop. I will literally punch myself in the face right now for not doing so. Ow. There.

All I could think about through most of the movie was how to word this review, but I could never do it justice. Curse the 5 star reviews and the 3.5 star average. PLEASE, for the love of whatever, just DON'T DO IT!!!!
7 people found this helpful

John P. Jones IIIReviewed in the United States on July 13, 2021
3.0 out of 5 stars
Coming around a very large circle…
Verified purchase
Way back in high school, and for me the way back is in caps, we had to carry back and forth to school a tome that was an anthology of world literature. An excerpt from “Beowulf” commenced the tome. I read it. Remember nothing of it. Of late I decided I needed to improve my knowledge of the history and traditions of the Nordic area. Recently watched the four-hour series entitled “Storm over Europe – The Wandering Tribes” concerning the Nordic and Germanic tribes that eventually overwhelmed the Roman Empire. I rated the series 4-stars in my review. So, I thought I’d try a visual account of that first story in the anthology, lo’ these many years later. It was directed by Sturla Gunnarsson and released in 2004. Gerald Butler is Beowulf and Stellan Skarsgard plays the often-drunk King Hrothgar, leader of the Danes. Beowulf is a Geat, who comes from just across the straits, in modern day Sweden.

Its 500 A.D. A child sees his father murdered by Hrothgar and his lads. The child clings to the side of a cliff, escapes and grows up to become a super strong being, Grendel, who is called a troll (long before the Internet!), who repeatedly attacks Hrothgar and his forces, killing many. Beowulf comes from Geat-land, with a score or so of warriors, to the rescue. There is also Selma, a very attractive witch, whose had a hard life, which is not revealed on her face or body. Naturally, Beowulf sees some merits in her… as has, hum, that very strong troll. Lots of fighting, lots of drinking, some passable sex, at times ribald dialogue about sex with walruses, all in an extremely bleak landscape that is not actually Denmark, but rather Iceland. Also wandering around is a warrior-monk, Brendan, who is trying to convert them to Christianity and reminds them of Clovis. Hrothgar eventually takes the full-immersion dip in the river.

What to make of all this? It was a passable tale that I might have given 4-stars to, with Selma helping to boost the score. The problem though is that I never read Beowulf, which, one of my Danish friends has insisted, is some pretty good stuff. I read a number of other reviews that were highly critical, denouncing it for being cliché ridden, politically correct, et al., with too many changes from the original. The 1-star review of Grolar and the 2-star review of Hale seem to be quite valid, from viewers who know the source material, and were not “bewitched,” as I might have been, by the beautiful Selma.

Thus, will lower my rating to 3-stars, and commit to reading some Nordic source material, particularly the one provided by one of my Danish friends, more than a decade ago, entitled “The Sagas of the Icelanders.”
One person found this helpful
See all reviews
Back to top
Get to Know Us
Make Money with Us
Amazon Payment Products
Let Us Help You
EnglishChoose a language for shopping. United StatesChoose a country/region for shopping.
© 1996-2021, Amazon.com, Inc. or its affiliates