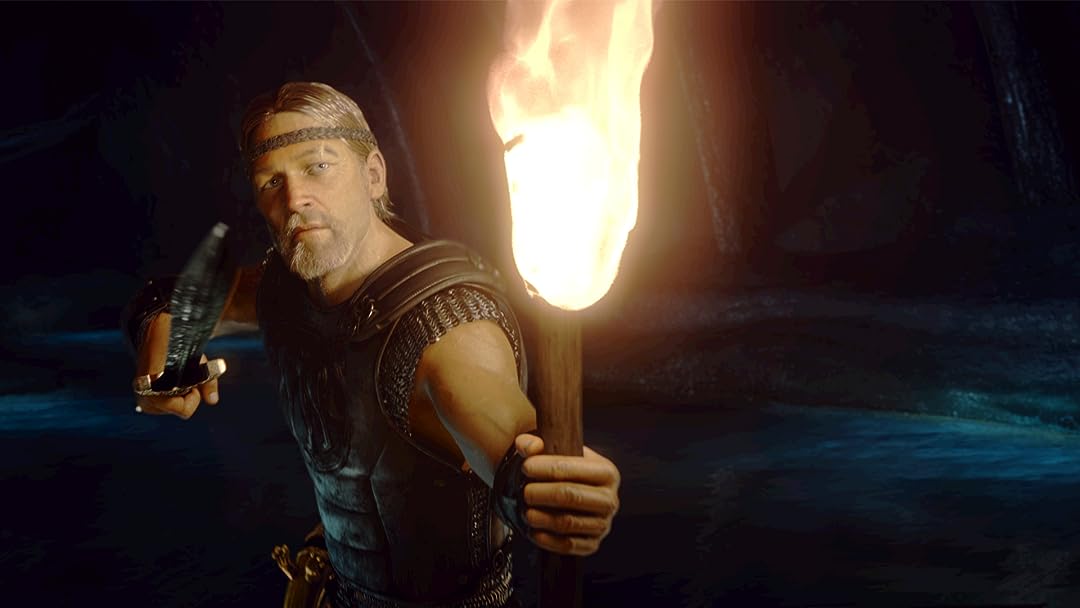 (2,580)
6.21 h 54 min2007X-RayPG-13
After Beowulf, the mightiest warrior of all, destroyes the overpowering demon Grendel, he incurs wrath of the beast's mother to seek out revenge.

Theo MontgomeryReviewed in the United States on September 8, 2018
5.0 out of 5 stars
Everything you could ask for.
Verified purchase
I remember seeing this film in theaters, in REALd (3d). I was blown away. I could go on for pages and paragraphs more applauding this film, but I'll just say a few things.
Though it is only an adaptation of the epic poem... the truth is I believe the film does as good a job or better at telling a story. There may be a few differences.. some small and some quite large.. I believe all of them are commendable, and the finished product is without a doubt one of the boldest and strongest narratives I've seen. Don't just judge the film on its relation to the source material, or on the occasional silliness and 3d camera mugging. Listen to Beowulf's words, listen to Wealthow's songs and the woe that is Grendel's mother. Let it all dig into your mind and boil over until you watch it again. It only gets better with time.
26 people found this helpful

jon snowReviewed in the United States on February 20, 2021
1.0 out of 5 stars
take a bit of myth take a bit of propaganda and mix with agenda
Verified purchase
this is unwatchable garbage. i saw it years ago when i was more naive to the world and didnt like it, but now I can't imagine how my younger self watched it thru.

if you had a compare this to lord of the rings, its a big fat 0. its worse than the hobbit as well and that says a lot.

its amazing how propaganda is used so often now yet its so good that people dont notice at all. the under theme of this whole show is that men are bad, and how do you take a epic tale of heroism and debase it to that, with millions of dollars.

i wonder if they will ever use propaganda for good, i mean you got people believing lies, maybe try being good and telling the truth.

joel wingReviewed in the United States on May 8, 2020
4.0 out of 5 stars
Who are the villains and heroes in this tale?
Verified purchase
Beowulf was a fantastic animated feature loosely based upon the classic Old English poem. Beowulf takes place in a world of heroes, monsters and magic. It poses the question of how far will a hero go for fame and what are the consequences?

Beowulf arrives in the kingdom of Denmark to slay a monster known as Grendel who has been haunting the country. The problem is Grendel has a mother who offers Beowulf a deal that seems too good to be true thus creating the dilemma of what will happen to the hero if he accepts?

The movie is full of action and horror. Grendel for example brutally kills several warriors and looks like a giant deformed child. His mother comes and hangs a whole hall’s worth of people in revenge.

The animation is top notch and was originally in 3-D when it was released in the theater.

The movie is most interesting because it raises the issue of who is really responsible for the problems in the movie? Is it the monsters or the heroes? Could it be the humans lust for power and notoriety that is really at fault?
C
9 people found this helpful

e-bevReviewed in the United States on October 14, 2017
5.0 out of 5 stars
Reversed Heroes
Verified purchase
I didn't think I'd like it because it is DECIDEDLY not the original. It was good in its own right.

HOWEVER, it is 180 degrees from the original poem. Whereas the poem is about the bravery and nobility of Beowulf and the expressed value of these attributes in his society, the movie is the opposite. The people are SO flawed in the movie, and the monsters are victims of the horrible people. If you accept that "this is not your textbook's Beowulf," you can enjoy it.
14 people found this helpful

Amazon CustomerReviewed in the United States on June 19, 2018
5.0 out of 5 stars
Not a film you watch for historical accuracy. Truly ...
Verified purchase
Not a film you watch for historical accuracy. Truly a cinematic marvel in terms of voice over acting, and most of all, computer generated animation. Extremely impressive. Originally released in theaters in 2007, considering we are in 2018, it holds amazingly well after 11 years. Written in similar fashion to the Anglo-Saxon anonymous poem of 750 A.D. It is definitely an epic tale. Grand actions, the setting is large and the hero outstanding. The songs are vocalized, clearly to entice the old English style of bard song and dance and the musical instruments such as the harp accompany some melodies to completely support the style of the fantasy world. One can see that much was borrowed from Beowulf to make the hit series game Elder Scrolls: Skyrim. In my opinion, a modern, albeit inaccurate retelling of the epic saga of the Swedes of the Geatlands and the Danes of Denmark with a remarkable cast, written in a modern style which approximates old English in conjunction with a deeply symbolic representation of the motif of the hero's tragic flaw, excessive pride. It is a tale both terrifying and mesmerizing, lingering and stewing within the soul, long after you've feasted upon its tantalizing flavors. 10 out of 10.
20 people found this helpful

PoeReviewed in the United States on November 28, 2020
5.0 out of 5 stars
Listen, I know...
Verified purchase
This is not your mother's Beowulf. However, when one thinks about how film is really a medium, the visual perspective of a written work through the directors lens, then you can accept this as a unique take and not a bastardized version of the most ancient of English Epics. I actually love it now -- in the sense of -- why not. Let's explore this Christianity, Paganism shift, and then explore hubris and tragic hero in a fun, ultimate sin type deal with scandal. If you plan to watch this to cheat on your Beowulf reading -- DO NOT. Your teacher/professor will absolutely know. Hey -- if we can figure out The Crucible cheating from film to text than this is easy peasy, so read the wonderful literature (I suggest Seamus Heaney's version). Then, watch this interpretation of the poem.
One person found this helpful

TPJRReviewed in the United States on September 7, 2017
4.0 out of 5 stars
Great Movie, Finally in 3D...
Verified purchase
Beowulf was one of the forefathers of the current 3D age... I remember how excited I was to see it in the theatre; and it has always stood up as an example for how to properly use the format since. But it has never gotten an American 3D bluray release. I've waited for years without hope.

I was so glad to finally find this copy. While the packaging is in italian, the classic english version if the film is still there, intact, finally back in 3D. Some ghosting issues on character's edge in a handful of close up shots (which ruin my 5 star rating) but overall worth it to have this classic 3D movie in my collection.
8 people found this helpful
See all reviews
Back to top
Get to Know Us
Make Money with Us
Amazon Payment Products
Let Us Help You
EnglishChoose a language for shopping. United StatesChoose a country/region for shopping.
© 1996-2021, Amazon.com, Inc. or its affiliates